Who Is Jason Dupasquier? Get To Know About The Swiss Motor Rider's Age, Death And More 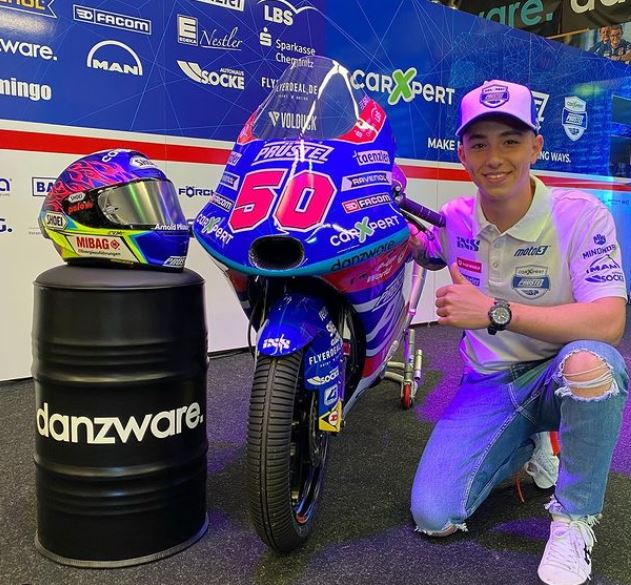 Jason Dupasquier was a motorcycle rider. He was doing well on his journey. Also, he established himself as the top ten racers on the  2021 Italian Grand Prix until his death. The young rider still had so much to achieve, but destiny had another plan.

As Jason’s family has a history in moto racing, he was engaged in the same path since he was only ten years old. Though he was much junior to other riders, his riding pace was beyond anyone.

But, Dupasquier could not continue his passion for a longer time. However, his legacy will be forever imprinted in moto racing history. If the accident had not happened, he would have shone brighter. What made him depart from the world? Let’s get to know in detail below.

How Did Jason Dupasquier Die? From Racing To Battling For Life At Hospital

In late May 2021, Jason participated at the Italian Grand Prix 2021 in Mugello Circuit, Italy. He was competing for the qualifying session. He was gaining the points and was at the top among ten contestants.

However, the departed rider lost his control, and the tragic incident took place when he reached between the ninth and tenth turn. When Jason fell off his bike, he came across the Japanese rider, Ayumu Sasaki’s bike. Also, the next participant, Jeremy Alcoba, got injured.

Soon after the crash, the session was stopped in the middle. And the onboard doctors gave medical assistance to the seriously injured Jason for at least 40 minutes, says Wealthyspy. After that, the Careggi Hospital’s flight ambulance took the late rider for the proper treatment.

Then, Jason went through thoracic surgery for a vascular lesion at the Careggi. Also, the departed rider went through several treatments for his brain injury. As a result, he was kept under strict doctor’s supervision for a whole night.

Unfortunately, Dupasquier couldn’t continue his battle for life more than a night. So, in the early morning of 30th May, his doctor announced him brain dead. After hearing such tragic news, Jason’s parents flew to the hospital. Then, the medical staff removed every medical instrument from his body, which supported his life and announced him dead. That was the moment when we lost a passionate moto rider.

How Is The World Mourning On Death Of Jason Dupasquier

Jason’s Instagram manager announced the news of his passing on 30th May. The unidentified manager wrote the cause of Dupasquier’s death and thanked all his well-wishers along with his photo on the Instagram handle, @jasondupasquier50. The original caption includes,

As you have all seen on the internet, Jason Dupasquier has left us; he was declared brain dead early this Sunday morning, we waited for all his family to be gathered around him to disconnect the aids that kept him alive, and he left this Sunday evening surrounded by the people he loved. Thank you for all your support. Rest in peace Jason Dupasquier #JD50. Amen.

Soon after, the fans and the dear ones flooded Jason’s comment section with the condolences message.

Plus, the MotoGP took its official Twitter to handle to express sadness on Jason’s tragic death. They posted the picture by writing a long message, including, "you will be sorely missed, Jason. Ride in peace." 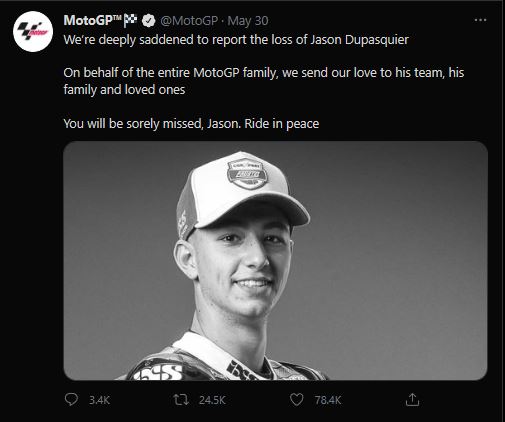 Jason’s team, Prüstel GP, also took the medium of social media to express their sadness on such a never-forgetting loss. On Facebook, the group wrote,

"We're devastated, and at this time, all of our thoughts are with Jason's family. You'll be sorely missed and never forgotten, Jason."

Similarly, every person, who knew Jason, shared their emotions on Twitter, Facebook, and Instagram. Also, we are sure the prayers for his family and him will be overflowed as the day passes by. Our thoughts and love are with his family and friends.

The departed rider began riding the motor from the age of ten. He has a record of winning several trophies for the SuperMoto Swiss Championships. After leaving his footprint in the Swiss Championship, Jason won ADAC NEC Championship and joined the circuit racing in 2016. Ultimately, this achievement made him qualified for the 2017’s Junior World Championship.

Then, Moto3 gave a two-year contract to Jason in 2019. And, he started his professional journey as the Moto3 rider in 2020 and entered the World Championship with the Prustel GP squad.

In 2021, He competed in Losail World Circuit, Le Mans, and Algarve International Circuit. Also, he ranked seventh at the Circuito De Jerez.

How Rich Was Jason Dupasquier? Detail On Net Worth

Jason was originated from a wealthy family. To be precise, his great and grand father named Robert Dupasquier and Raymonde Dupasquier founded Dupasquier Motos-Sorens in 1973. The company was dominating others even in that era. Now, it is regarded as one of the largest dealers of KAWASAKI and Motto Guzzi. So, Jason never had any shortage in terms of luxurious upbringing.

Also, Jason’s father and uncle are renowned moto racers as they have won multiple Swiss Championship titles. Plus, his father, Philippe, even secured fourth place in the World Motocross Championship. The late champion’s family has accumulated a considerate fortune.

Though we are unaware of Jason’s family’s total worth, we have obtained data on his assets. As per many reliable sources, Jason had a net worth of $2 million.

Explore: Who Was John Richard Hersey? Everything About American Writer

Jason was born in 2001 in Bulle, Switzerland. He celebrated his birthday for the last time on 7th September 2020, which made him 19 years old at the time of his death. And his zodiac sign was Virgo.

Jason was a son to his father, Phillipe Dupasquier, and a mother, Andrea Dupasquier. His parents have been together from the day they got married to each other on 18th October 1997. Andrea’s profession is out of reach, but she went to CO de la Gruyere.

In contrast, Phillipe is a former motocross rider and supermotard. Also, he workes as the sales and motorsport manager at KTM Switzerland. 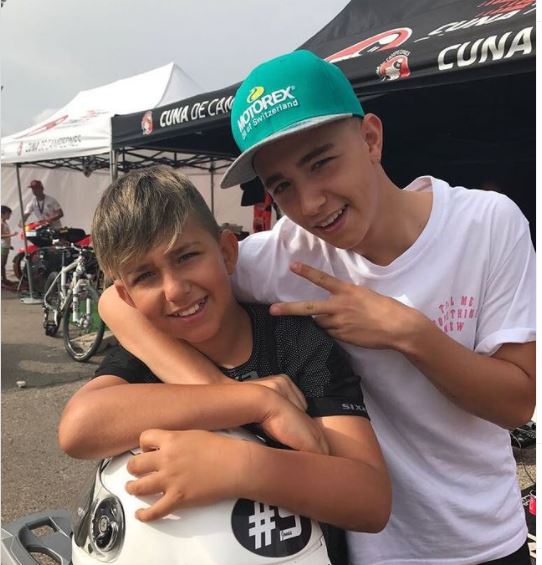 Besides, Jason shared a close bond with his two siblings named Alyson Dupasquier and Bryan Dupasquier. Alyson is serving as an operations assistant at the Tabelca SA. Also, she has experience working at the Manor Sa and  KLARA.CH. At the same time, the departed rider’s brother is making his career at Motorsport.

Jason stood tall at the height of 5 feet and 6 inches (1.68 meters). He looked handsome on his racing dress as he was gifted with decent size.

As Jason was born in Switzerland, his nationality was Swiss.

Was Jason Dupasquier Dating Anyone? Girlfriend and Romantic Life

Jason was protective of his personal life. Since he joined motor racing, he never made an appearance with any lady who looked like his girlfriend.

Even on his social media, Jason didn’t upload any photos, which proved that he was indulged in a relationship. So, he was not dating anyone and was entirely focused on his career until his last breath.