Who Is American Idol Grace Kinstler? Sneak Peek On Her Personal Life 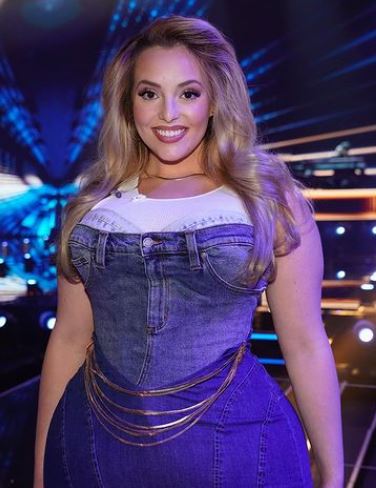 Grace had a singing talent since she was a child. As the day passed, she honed her talent and made a significant impact at American Idol 2021. By singing Gladys Knight & The Pips’ Midnight Train to Georgia, she astonished every judge. Even her singing made the judge Luke Bryan tear up for the first time in his four years.

Kinstler’s first performance left everyone speechless. Also, she got the golden ticket for delivering a marvelous stage. Likewise, she had sung the songs like Natural Woman, 10 Seconds, Grenade, Father, Queen, Elastic Heart, Happy, Fix You, While We Were Young, and Into The Unknown so far at the American Idol 2021.

With the increasing popularity of Grace’s voice, many are eager to know about her private life, including her boyfriend and family. So, why not go through the article below?

Grace was born on 4th August 2001. Her birthplace is Chicago, United States. As her birth month is August, her zodiac sign is Leo. As of now, Kinsler’s age is 20.

The music artist is a daughter to her mother, Sherry, and a late father, Mitchell Ian Kinstler. Grace has a powerful bond with both her parents since childhood. Her parents guided her in every up and down. Even Grace could give her best performance on the American Idol because of her supportive family members.

Also, Grace is a daddy’s girl. She wanted to make her daddy proud, but God had different plans. Her biggest cheerleader took the last breath on 5th February 2020 at the age of 64. Mitchell’s sudden demise left Grace heartbroken for a long time. But, the young singer pulled herself together to achieve success for the sake of her late father. By looking at the recent achievement, late Ian must be smiling in heaven above.

Some Quick Facts About Grace Kinstler:

Sweet Sanity’s singer is in a relationship with Joseph Wheatley. Grace admitted dating him a long time ago. The two began developing romantic feelings for each other in November 2019, says Starsoffline.

Also, Grace and Joseph have always displayed their love whenever they get a chance, whether in a reality show or their respective social media account. In particular, Wheatley celebrated the first anniversary on 12th November 2020. And he took his official Instagram handle, @josephwheatleyofficial, to share a lovely picture, with the beautiful caption by saying,

In the same way, Grace has been supported by her beau wholeheartedly for her every journey, including American Idol 2021. To cheer, Joseph even posted a picture with a lengthy message on Instagram on 28th January 2021.

Without a doubt, the duo is deeply in love with each other. Ans most probably, they might explore the world together for infinite time.

You Might Want To Explore This: Is The Equalizer's Actress, Liza Lapira Dating Anyone? Get To Know About Her Age, Boyfriend And Net Worth

What Does Grace Kinstler’s Boyfriend Do?

Grace’s sweetheart, Joseph Wheatley, is also a musical artist. He is a beatboxer, and a member of the Pitch Slapped A  Capella group. As they both are in the same field, there is no way to misunderstand them regarding works and career.

Similarly, Wheatley originated from England, United Kingdom. Currently, he is residing in Massachusetts. Regarding education, Joseph is a student at the Boston located, Northeastern University.