By Dipesh Katuwal
Published:  May 27, 2021
RHOC star Kelly Dodd is not the one to back off as she sticks to her critical comments on Chrissy Teigan. She says, "Chrissy Is a Hypocrite, I'm not." Her comments come some weeks after Chrissy faced backlash for her comments on Courtney Stodden. Keep reading to learn the whole story!

The Real Housewives of Orange County star Kelly Dodd is not backing off her comments on the American model Chrissy Teigen.

The 45 years old reality television star went on to defend herself after calling Chrissy “mean” on the comment section of Page Six’s Instagram post amidst Chrissy’s cyberbullying scandal.

“She is the hypocrite, I’m not,” wrote Kelly on the comment section of Page Six’s Instagram post of May 23, 2021, after two Instagram users said, “Pot meet Kettle” and “The shoe fits ma’am!!!” to her.

The RHOC star’s first response to Chrissy’s downfall also came on the same Instagram post. Page Six’s Instagram post read, “What a mess. #ChrissyTeigen has fallen from America’s "tweetheart" to social media’s biggest bully, and now her career, business deals and, of course, reputation all hang in the balance.”

While responding to that, Kelly took to the comment section and wrote, “What’s ironic is that she has the audacity to say, I’m mean and our show is hard to watch because it’s so mean . Karma is a bi**h #rhoc.” 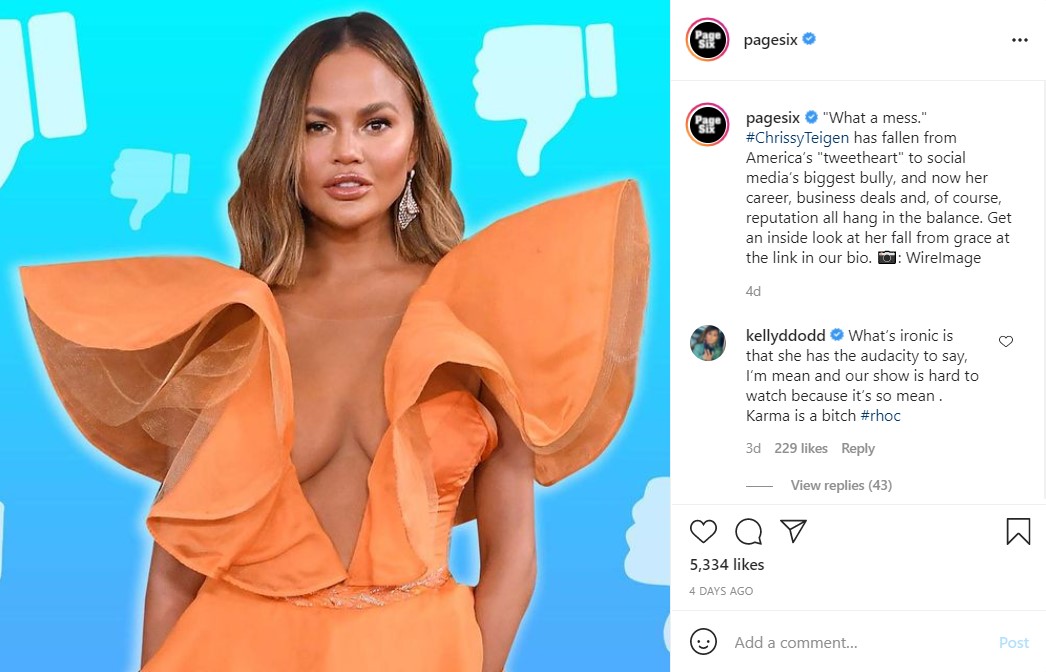 The Origin Of The Comments On Chrissy

The whole comment section’s origin dates back to some weeks ago when the 35-year-old model, Chrissy, faced backlash for the comments she made on Courtney Stodden, an American singer-songwriter who prefers to use “they/them” pronouns.

Chrissy started to face the backlashes after Courtney revealed that Chrissy had sent some horrible messages to them on Twitter back in 2011. Some of the messages read, “Go. To sleep. Forever.” and “I can’t wait for you to die.”

Following the revelation, the model lost the deals with some popular brands like Bloomingdales and Macy. Later, she went on to Twitter and apologized for her past actions.

On May 13, 2021, Chrissy took to her Twitter to apologize publicly. She wrote, “Not a lot of people are lucky enough to be held accountable for all their past bullshit in front of the entire world. I’m mortified and sad at who I used to be.”

The tweet thread continued, “I was an insecure, attention-seeking troll. I am ashamed and completely embarrassed at my behavior but that is nothing compared to how I made Courtney feel. I have worked so hard to give you guys joy and be beloved and the feeling of letting you down is nearly unbearable, truly. These were not my only mistakes and surely won’t be my last as hard as I try but god I will try!!” 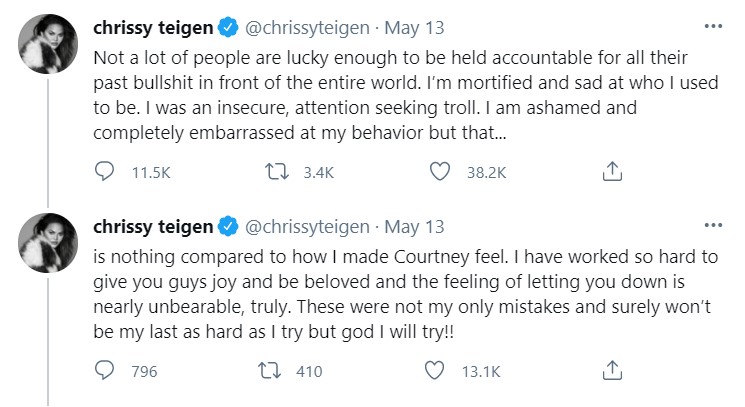 She also wrote that she had tried to reach out to Courtney privately, but she decided to apologize publicly as the matter was publicly fueled. “I’m so sorry, Courtney. I hope you can heal now knowing how deeply sorry I am,” read the last sentence of the third tweet thread.

Kelly Has Also Received Backlashes In The Past

Kelly Dodd, who boasts a net worth of $10 million, has been garnering attention from the public due to her remarks on Chrissy Teigan. But, it cannot be unseen that she has also been a part of some raging discussions in the past.

The TV personality also received some backlashes after she claimed that the global pandemic COVID-19 was “God’s way of thinning the herd.” But that wasn’t the only time she mocked the pandemic, as she has been doing so frequently since then.

As a result of her bad gesture, she had to part ways from the deal she had with Positive Beverage in February 2021.

Likewise, Kelly also received some negative attention after making a remark that she “[doesn’t] like black guys.” That, too, wasn’t received well by the public even though she alleged that she was African American herself.

You May Also Like: Who Is Candice Jimdar? Get To Know About Her Age, Height, Net Worth And Domestic Violence

Currently, it seems that she has been avoiding such instances that might result in her getting more backlashes. Nonetheless, the one thing she hasn’t backed off from is her comments on Chrissy. Let’s see where this leads to, although Chrissy is yet to respond to Kelly’s comments.