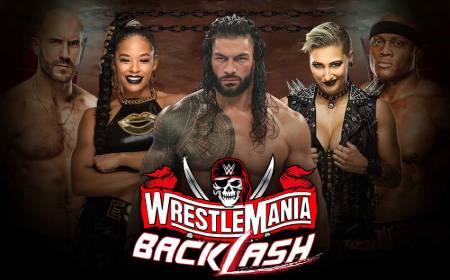 World Wrestling Entertainment (WWE) has been conducting numerous pay-per-views ever since it was founded in February 1980. As of now, it has become one of the biggest destinations of pro-wrestlers, with pro-wrestlers such as The Undertaker, Triple H, Roman Reigns, Charlotte, Randy Orten, Asuka, and more already on the brand.

Other than the big talents that WWE has been recruiting over the years, the other thing for which it is renowned is its huge pay-per-view (PPV) events, with WrestleMania being the biggest of them all.

The most recent PPV event was titled WWE WrestleMania Backlash, which aired live on May 16, 2021, straight from the WWE Thunderdome inside Yuengling Center in Tampa, Florida. The event featured some big cards, with the Universal Champion Roman Reigns defending his elite title against Cesaro and many more. So, who was victorious in their respective matches? Let’s find it all out!

The first match of the WWE WrestleMania Backlash was during the pre-show when the United States Champion Sheamus came out and issued a non-title challenge to anybody out in the locker room. Answering the challenge was the high-flying Ricochet.

During the initial stage of the match, Ricochet was in control, but a headbutt from the Celtic warrior stunned him. After that, Sheamus was in total control of the match, with him exchanging blows and slams. Later, the high-flying Ricochet won the match as he hit a springboard clothesline followed by a shooting star press into a springboard Moonsault for a two-count.

However, the US Champion wasn’t backing off as he kicked out of a roll-up and hit Ricochet with a huge knee to the face for a three-count and the win.

After a good show between Sheamus and Ricochet ended, the pre-show ended and it was time for the real show to begin. The first match after the pre-show was between Rhea Ripley, Asuka, and Charlotte Flair, with Rhea defending her Raw Women’s Championship.

The match started with all three contenders circling each other just before Charlotte rolled out herself out of the ring. However, the two other competitors forced her to get back in the ring. But, the triple threat match once again became one-on-one when Charlotte took out Asuka for a while.

The match continued as The Queen and The Nightmare fought out. The one-on-one equation lasted only for a while as The Empress of Tomorrow returned into the ring and began to hit some fiery strikes. A few moments later, the former Smackdown Women’s Champion Charlotte took out both of her competitors with a Moonsault and double Natural Selection.

Sadly, both Asuka and Rhea were kicked out at two-count. Thereafter, Rhea took advantage of Charlotte's mistake and hit Asuka with her finisher move, Riptide, to retain her Raw Women’s Championship.

Following a gruesome triple threat match, it was time for some tag-team action as Robert Roode and Dolph Ziggler defended their SmackDown Tag Team Titles against the father-son duo of Rey and Dominik Mysterio.

During the match, the veteran Rey Mysterio was left alone as his son Dominik was ruthlessly attacked by Robert and Dolph during the pre-show due to which Dominik couldn’t compete. However, Rey didn’t quit and competed alone, using his fast speed to gain momentum during the initial stage.

Sadly, the handicap situation didn’t favor Rey as he was kept grounded by the tag team champs. Later, an injured Dominik came towards the ring to back up his father.

The master of 619 countered some moves from Robert and Dolph as he finally decided to tag in his son.

Dominik jumped right into the ring as he sent Dolph out of the ring and began attacking Robert Roode. However, the momentum was killed immediately as Roode delivered a spine buster to Dominik. Nonetheless, Rey and Dominik managed to make a comeback as Dominik hit a splash from the top rope and pinned Robert Roode to win the tag titles.

The win made Rey and Dominik Mysterio the first-ever father-son duo to win tag-team titles in the WWE.

The match between The Miz and Damian Priest was built up for a long time and they finally competed in WWE WrestleMania Backlash in a Lumberjack Match. But, unlike any other lumberjack match, WWE decided to cross-promote Batista’s new movie Army of the Dead in this match, thus making all of the lumberjacks dressed up as zombies.

Due to all of the zombies, The Miz seemed distracted for a while but he gave a tough competition to Priest. However, the zombies’ situation got serious for a while as the two opponents forming a short alliance to fight against the zombies.

Moments later, The Miz’s best friend John Morrison came in to help him, but, he was also distracted by the zombies. Taking advantage of the situation, Priest used his finisher and won the match. After the win, Priest jumped off the ring and let the zombies take The A-Lister.

The Miz vs. Damian Priest match wasn’t that rejoiced by the viewers. The match was followed up by a title match with Bianca Belair defending her SmackDown Women’s Championship against the former titleholder Bayley.

The two great talents kept things technical during the initial moment of their match, but, as soon as the current champion began heating things, all of the tones shifted. At one point in the match, the challenger dropped Belair into the steel steps and delivered a suplex to her.

As the match continued, The Role Model delivered a Bayley to Belly to the champ but The EST of WWE didn’t stay down as she rolled up Bayley and used her braid to successfully defend her SmackDown Women’s Championship.

Five matches later, one of the biggest matches of the event came when The All-Mighty WWE Champion Bobby Lashley defended his title against Drew McIntyre and Braun Strowman in a triple threat action.

When the bell rang, the champion offered The Scottish Warrior to ally against the former Universal Champion Braun Strowman. But, their short-talk was immediately dismantled by Strowman before the two made a decision.

Although the decision wasn’t made, they aligned up to fight against The Monster Among Men and delivered a double vertical suplex. The moment Strowman was out of the equation, Lashley and McIntyre focused on themselves and began trading blows.

Later, The Monster Among Men hit the champ with steel steps. McIntyre followed up as he sent Lashley through the LED screens, creating some electrical short circuit. Following that, the remaining two traded blows for a while.

When both of them were back into the ring, McIntyre hit Strowman with a Claymore. Unfortunately, he couldn’t capitalize on the moment as the champion returned and threw him out of the ring. At last, Lashley hit a big Spear on Strowman and pinned him to retain his WWE Championship.

The match between Roman Reigns and Cesaro with Roman’s Universal Championship was the most anticipated match of the night given the amazing build-up. The Tribal Chief was accompanied by Paul Heyman while The Swiss Superman was all alone.

The match started with Reigns backing Cesaro to the corner but breaking the hold quite easily. After that, they shared a few blows before the champion rolled out of the ring to catch his breath. The match continued slowly as Reigns came back inside the ring and traded some blows.

But, Reigns was stopped after a while when The Swiss Superman delivered a perfect popup uppercut which brought the champ down for a while. He then delivered a corkscrew plancha, an uppercut, and a crossbody to almost grasp a win. However, The Tribal Chief countered Cesaro as he took control of the match and began focusing on his injured arm.

Later, while Cesaro was trying to hit his finisher Neutralizer, Reigns countered him as he locked him in an armbar and delivered a Superman Punch.

But, Cesaro recovered immediately as he broke Reign’s guillotine choke and put him in the Sharpshooter. Despite Cesaro’s great effort, Reigns countered back again and put him back in the guillotine. The submission move choked Cesaro as he lost breath and fainted out.

As a result, Reigns was able to defend his Universal Championship. When the match ended, Reign’s cousin Jey Uso came and attacked Cesaro. Just when Jey was attacking Cesaro, Seth Rollins’s theme song started as The Messiah came down face-to-face with his former SHIELD partner, Roman Reigns.

Later, Rollins began beating Cesaro as he put a chair on already beaten up Cesaro’s arm and swung it into the ring post. In the end, he wrapped things up with a Stomp.