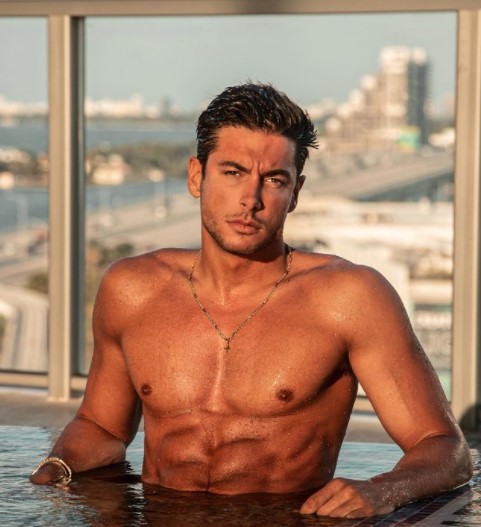 The Italian DJ and fashion model based in New York City, United States, Andrea Denver arrested viewers with his charming personality and gorgeous face in season 6 of Winter House. Andrea is back in the reality series again, now called the Summer House. The first episode of season 6 aired on January 10, 2022.

Besides, Andrea also has been featured in music videos of celebrities like Taylor Swift's Blank Space and Jenifer Lopez‘s song I Luh Ya Papi.

Born on May 3, 1991, in Verona, Italy, Andrea's age is 30 years as of 2022. His real name is Andrea Salerno and his sun sign is Taurus. His mother's name is Licia Landi. Not much is known about his parents or siblings. Andrea's family's information has been kept confidential to keep their private life safe

In 2013, Andrea graduated from the University of Verona with a degree in Communication Science. A year after, he shifted to the United States to get his master's degree in communication. While in Miami, he caught the attention of Wilhelmina Models and was immediately signed to them.

Andrea was also once rumored to be in a relationship with distinguished pop singer Madonna. Although, those rumors were never verified by either party.

Denver was previously scouted at the age of 16 while in LA. At the time, Andrea was merely a school student, and thinking he couldn't handle the profession, he let go of the opportunity.

However, 2 years later, he was again discovered by a modeling agency. This time, Andrea grabbed the chance and went for it. Nevertheless, his studies were getting compromised so eventually he had to leave.

They will try to make you stop smiling, but you always look at life with confidence. ðŸ™ðŸ»ðŸ˜ ðŸ“¸@gabrielegriseri Proveranno a... Posted by Andrea Denver on Wednesday, July 29, 2020

At the age of 23, Andrea took to modeling as his career. He has even been nominated three successive terms as "The Model of the Year Award - Social Media Star Men" on Models.com.

Denver has appeared in campaigns for Hugo Boss, MAC Cosmetics, Brooks Brothers, Colcci. etc among others He has featured on the covers and editorials of numerous magazines including Men's Health Serbia, Lui, L'Officiel Hommes, FourTwoNine to name a few.

He has walked as a runway model for brands including Ralph Lauren, 2xist, and worked alongside eminent fashion industry photographers such as Collier Schorr, Craig McDean, Rick Day, Arnaldo Anaya-Lucca, Yuri Catania, and Brent Chua.

While the sizzling hot Denver had admitted to being single in the past, he seems to have finally found someone. As reported by PageSix, the model is officially off the market! Despite owning up to his relationship, Andrea kept pretty hush-hush about his girlfriend's identity and her whereabouts.

While the model didn't want to presage the future, he brimmed with happiness as he talked about marriage and how great it would be if it transpired with his current boo.

After his official Bravo debut, viewers immediately felt the chemistry between Andrea and his co-star Paige DeSorbo. Their mutual flirtationship was quick to become a fan favorite interaction and was even a major storyline in the show. However, we don't know whether Andrea's current girlfriend is Paige or somebody else.

Andrea opens up about being ready to "focus on one woman and giver her [his] entire self," and wonders if Paige could be that person. #SummerHouse https://t.co/u72SYchOF9 — Bravo (@BravoTV) February 13, 2022

Denver briefly talked about his ex-girlfriend in the Nov. 3 episode of winter house. The model apparently had broken up with his ex in mid-2020 during the pandemic. The star shared that due to COVID, he had got stuck in Italy, while she was in the USA. The situation became tougher and therefore, the pair decided to end things.

The model has not been married to anyone yet. There has been no such information regarding the model having tied the knot to anyone in his life. Likewise, Andrea doesn't have any kids yet either.

The model is on Twitter with over 26K followers. Meanwhile. Andrea's Instagram profile has over 1.2M followers, and his Facebook has 246K followers. Andrea is quite the social media influencer and has a huge fan base that keeps up with his updates every day.

Model Andrea also has very his own website you can check over here.