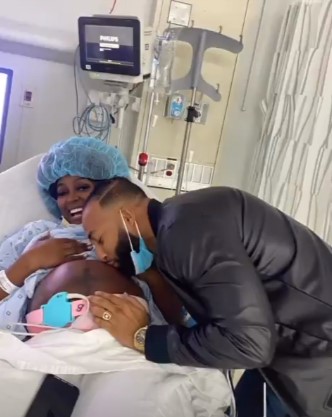 It's a double-baby blessing for American singer and author Amara La Negra and the father of her children Allan Mueses! The singer recently announced the birth of her twin girls on March 23rd. The ecstatic mom Amara shared the birth of her daughters through her social media.

Who Is Amara La Negra? Wiki

Besides, La Negra was also anointed by Billboard as the show's "breakout star". Subsequently, Amara also landed a multi-album record deal with BMG some hours after the show got premiered. Last year in April 2021, Amara La Negra shared the news of her weight loss. The actress had reportedly lost 35 pounds in such a very short amount of time. Later, Amara revealed that her major weight loss was due to overwhelming stress.

The singer gave birth to twins in March with Allan Mueses. Amara first met her baby daddy when she ventured into real estate. On Season 4 of LHHMIA aired in 2021, the actress shared that she was seeing Allan. Although Amara says she is presently single, the duo have been in an on-and-off relationship for quite a while. Besides, Allan also has two daughters named Layla and Alanna.

On November 5, 2021, Amara shared a caption on her IG post announcing her daughter's birth. The expecting mother shared the pictures of the ultrasound with her followers. Her post quickly gained traction and was filled with good wishes and congratulatory messages from her followers. Besides, the actress previously had a miscarriage and said she was scared and nervous at the same. Amara ended the post by stating how blessed she felt.

The American singer revealed in an IG post that one of the toughest moments for her was giving birth without being able to hold her babies and healing from her C-section. The actress further continued that she had to visit the NICU every day without being able to take her girls home with her. Amara also revealed that she didn't know how a series of an operation a C-Section was and how much sacrifice your body had to get through.

Before ending her post, she thanked the doctors and the hospital for treating her well.

The ‘Love and Hip Hop: Miami’ stars took to IG to reveal the arrival of their double baby blessings to the world. Amara had posted about the birth of her twins on March 23rd on her IG page. The star was showered with congratulatory messages by her fans and well-wishers. Besides, the star also has an IG account for her twin daughters named Las Royal Twins.

Amara also revealed that she is going to raise her daughters by herself. The actress had announced her pregnancy in November 2021.

The LHHMIA star is on Instagram with over 2.5M followers.  Besides she also has her own Youtube channel with over 188K subscribers and a Tiktok account with 481K followers.

Amara's Baby Daddy Allan is on Instagram with over 32K followers.