Inside the OnlyFans Creator and TikTok Sensation Anna Paul Boyfriend, Job and Net Worth 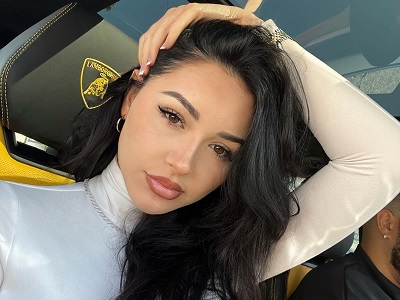 Anna Paul is a well-known social media star who is most noted as an OnlyFans star. The young lady shot to fame with her lip-sync videos on TikTok. From her social media handles, Paul showcases her daily life through vlogs.

After getting more followers, Paul thought of taking it to another level and broadening her career with the help of OnlyFans. No doubt, Paul has received huge support from her family and friends. Not only that, but she is also in a stable relationship with her boyfriend.

So, in today's writing, we will take a look at her life but let's start with her family background.

Anna Paul was born to her Turkish and German parents in Queensland, Australia on May 10, 1999, making her age 23 years old now.

Furthermore, Paul is not only the child in her family as she was raised alongside her brother named Atis Paul, a Tiktok star who is famous for sharing lifestyle vlogs.

It is reported that Paul's family had a tough life, and Anna is the one who pulled them out of it. According to Daily Mail, the family now lives happily in a waterfront mansion on the Gold Coast.

OnlyFans Creator Anna Paul's Net Worth Is in Millions

As we know, Anna Paul has been doing OnlyFans for quite a while now, and she is doing pretty well in this field. So, by sharing premium content with her followers, Paul has also preserved a jaw-dropping fortune. According to Lad Bible, Paul is estimated to have a net worth of around $6 million to $7 million ((£4.95m and £5.78m).

Apart from making money from OnlyFans, Paul also racks up money from sharing TikTok videos by promoting multiple brands. She has various jobs, and most of them are online. So, it can be said that Paul lives a lavish life as she makes a massive amount of money from her job. For your information, Paul considers her official job title is a sex worker. On May 27, 2022, one of her followers on TikTok asked about her job, and the OF star replied to the comment by taking her followers on a trip to the sex shop to grab some supplies for one of her videos.

From this, it becomes clear that she is mostly engaged in creating premium content for OnlyFans.

Moreover, Paul showcases her lavish lifestyle via her social media handles. Paul now lives in a mansion that also features a private elevator, an in-house cinema, a jacuzzi, and a private waterfront pool. Not only that, but the million dollars mansion's garage has the capacity of ten vehicles, and the property also boasts a $100,000 rock wall.

From this, it becomes clear that Paul has preserved a massive wealth from her online career. To be this successful, her boyfriend also has a great role. So, let's explore her love life below.

You may also want to read: Are Rudy Mancuso and Maia Mitchell Still Dating? More on Their Relationship Timeline & Breakup

The relationship status of Anna Paul is already taken, and she is in a romantic relationship with her loving boyfriend named, Glen Thomson. They have been going out since December 2015.

As said earlier, Thomson also has a great role in Paul's career. And it is reported that Thomson often collaborates with his girlfriend on online posts and helps her with filming and editing her content.

The couple often explores different places together, and they love featuring them on social media too. So, it can be said that their relationship is growing daily. Despite that, Paul and Thomson have not married yet. However, we can expect that they will turn their relationship into the connection of husband and wife in the future.