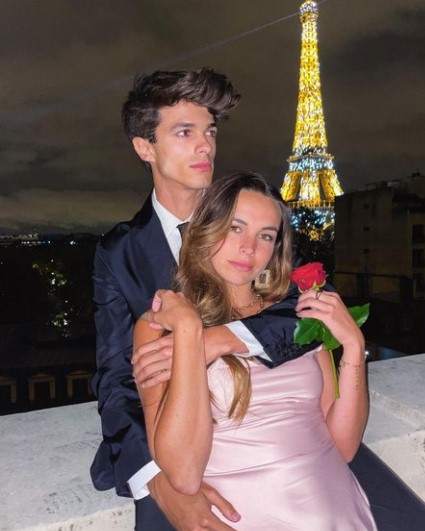 For people on social media, Brent Rivera is a well-known personality. Brent is an American YouTuber, Tiktok star, Instagrammer, entrepreneur, and actor.

The social media celebrity initially gained traction from the video hosting platform called Vine. After achieving massive popularity there, Brent attained massive followers on his other social media as well.

Born on January 9, 1998, in Huntington Beach, California, Brent Rivera is 24 years old as of 2022. His full name is Brent Austin Rivera. His father John Rivera is a firefighter, and his mother Laura Rivera is a teacher.

Rivera isn't a single child and has three other siblings; brothers Brice and Black, and sister Alexa Rivera. Brent's sister Alexa Brooke Rivera, known as Lexi Rivera by her fans, is also a social media personality.

As a child, Rivera played in many TV commercials and therefore was exposed to media early on. After joining Vine, the influencer gained massive popularity and was an active user there.

However, Vine was discontinued in 2017, and then Rivera started to upload on his old YouTube channel.

When Tiktok, the video-focused social networking service, started to gain popularity among users, Brent, like many other celebs, also joined the platform.

Eventually, his videos gained favor and made him one of the most influential creators of the app.

Brent is also a part of the professional squad called the AMP World influencers. However, all the members are friends and include famous influencers like Ben Azerlart, Lexi Hensler, Andrew Davila, and Pierson, to name a few.

The group appears together on Amp Worlds' official channel as well as on each other channels.

You may also want to explore: Is Purple Hearts’ Cast Sofia Carson Dating? Insights on Her Relationship Status

Who Is Brent Rivera's Girlfriend?

Brent Rivera has actually made no official claim on having a girlfriend.

There are rumors that verify his girlfriend is Pierson Wodzynski, a popular American TikToker, and a well-known social media personality.

Their #Bierson ship too is really popular amid the teens. They share a lot of flirtatious instances online and often act like a couple.

But, at the end of the day, they paste it up with a "friends" tag and do not let the doubts surface on the internet.

The two have had a lot of videos shot together where they are shipped by their fans in each.

But, again they make videos of them going on a date with other people while leaving absolutely zero clue on the actual thing.

The constant on and off in Brent's love life has aroused several questions within his fanbase.

Some even speculated him of being gay.

But, his sexuality is not at all gay. Brent is straight and he has had several relationships in his past.

The very first time, his relationship rumors caught up with Liv Swearingen. However, their dating rumors did not really grasp much of the public eye.

Then in 2017, he was reportedly dating Morgan Justus. Their relationship as well did not really last long but they actually seemed to have a really good bond even after their breakup.

It is because Brent still posted comic videos with her for his YouTube content. Finally, his last dating rumor was with Eva Gutowski.

Their relationship was made public only after their breakup. Till then, they had been keeping things to themselves. Back in 2019 and 2020, they were heavily shipped as #Breva.

But, certain reasons paved them apart, however, they still remain best of friends. Eva is seen really often in his videos.

Now, in 2022, Brent is again shipped with Pierson. But as mentioned earlier, since both have been constantly rejecting them dating, we can not acknowledge the two as a couple.

Also, check our article: Who Is Julia Fox Dating? Everything About The Actress Wiki, Net Worth, And Personal Life

Social media celeb, co-founder, and CEO of Amp Studios Brent Rivera's net worth is estimated to be around $4 million. The influencer has made his earnings largely through his massive popularity on social media.