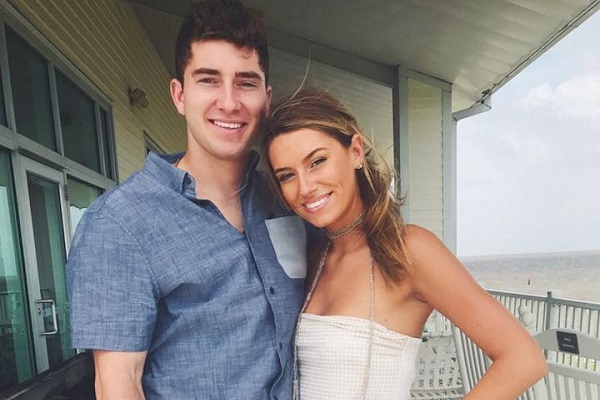 Below Deck is one of the most loved American reality tv series that follows a bunch of young people who operate aboard yachts that reckon over 100 feet long. The show's first episode was aired on July 1, 2013. Since then, many of its cast members have remained in the limelight.

So one of them is none other than Camille Lamb. She appeared in the 10th season of Below Deck. Her Instagram bio shows that she is a seafarer, singer, songwriter, and closet demo producer. Meanwhile, Lamb got more into the spotlight while being on Below Deck, revealing that she once dated a mysterious quarterback.

According to Reality TitBit, Camille Lamb was dating Shea Patterson in the past. Patterson is an American football player who plays as a quarterback for the New Orleans Breakers of the United States Football League (USFL).

She played college football for the Michigan Wolverines and the Ole Miss Rebels. His professional career started after getting signed by the Kansas City Chiefs in 2020. Besides that, Patterson is in the limelight regarding his relationship with Camille Lamb. It is reported that Lamb and Patterson met each other while studying at the University of Mississippi (Ole Miss).

During that time, Patterson was a famous quarterback for the university. Let's get to know more about their dating life.

As per the report by Reality TiBit, Camille Lamb and Shea Patterson began dating around 2016 and 2017. Lamb still has snaps from their dating days on her Facebook. While they were dating, Lamb used to attend Shea's games frequently. Not only that, but she gave a congratulatory kiss to Shea after a 29-28 victory over Texas A&M.

Likewise, Lamb and Patterson also celebrated the Below Deck star's birthday on June 23, 2017. Lamb also posted a photo on Facebook with Patter saying, "Thanks for spending my birthday with me. I love you very much! Shea Patterson."

They also used to post images together on social media handles. Not only that, but they visited different places together, including Horn Island in 2016. In the same year, they attended an ugly Christmas sweater party. Now, they do not appear to be together, as Lamb has stopped sharing posts with the quarterback.

Click and Read: Aesha Scott Is Planning To Get Married? Who Is She Dating Now? Insights into Her Relationship

Camille Lamb and Shea Patterson are no longer together. The official news of their breakup has still not been announced, but looking at their social media posts, we can say that they have already broken up. On December 11, 2017, it was announced that Patterson was transferred to play for the Michigan Wolverines.

So, Patterson left the University of Mississippi for his further career, and it may be the reason behind their breakup. But Screen Rant reports that Lamb once said that Patterson frequently cheated on her. Now, both of them appear to be single. Meanwhile, we can get more updates about Below Deck's star by following her on Instagram, where she is registered as @camillelambb.