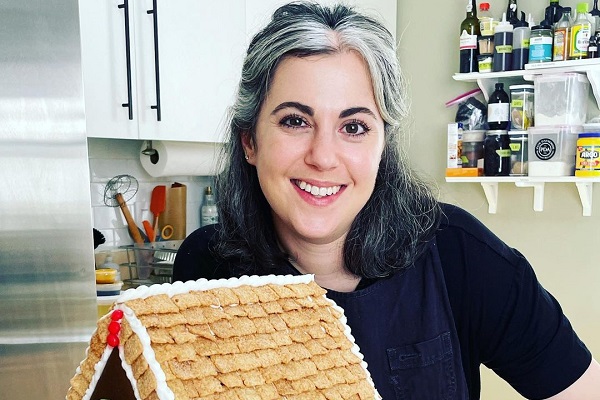 Claire Saffitz is a renowned American food writer and chef. She got into media prominence after working as a contributing editor at Bon Appétit magazine. Saffitz also starred in several series on the Bon Appétit YouTube channel.

Likewise, Saffitz is known for her two cookbooks named Dessert Person and What's for Dessert? Both of her cookbooks became New York Times Best Sellers. Now, she has her own YouTube channel named Claire Saffitz x Dessert Person, where she has gained more than 1 million subscribers.

Furthermore, Saffitz has a strong presence on Instagram, making exciting professional updates. Apart from that, Saffitz is also doing well in her personal life as she is married to her husband and has shared some glimpses on IG. Let's get to know more about her husband and their married life.

Harris Mayer Selinger is the husband of Claire Saffitz. He is a former New York City chef who now works at Hospitality Made Simple. He is the president and founder of the company. Besides that, he also serves as a managing partner at Creamline.

According to his Linkedin bio, Selinger also served as sous chef at Hundred Acres from October 2011 to October 2012. After that, he also went on to work at Five Points Restaurant as Chef de Cuisine for one year.

Talking about his educational background, Saffitz went to Cornell University and earned a BS degree in Hospitality Management. Later, he attended The Culinary Institute of America.

Also See: Gossip Girl: Does Taylor Momsen Have a Boyfriend? Complete Insights on Her Dating Life!

Claire Saffitz and her husband, Harris Mayer Selinger, have been with each other for quite a while now. It's unknown when the duo met or how long they have been together, as both of them have kept it a secret.

However, we can speculate that Saffitz and Selinger have been supporting each other for more than two years. After dating for some time, they reportedly got engaged in 2019.

Claire Saffitz and Harris Mayer Selinger tied the knot in 2019 in an intimate wedding ceremony. The marriage ceremony was held privately in the presence of their close ones.

The renowned food writer shared the happy news of her marriage in an Instagram post made on September 8, 2020. In the video, she shared how she had invested her time in relationships after taking a break from Bon Appetit Magazine. She wrote,

"I have taken a break from online life recently and focused like so many of us on how to live healthfully and responsibly amidst so many challenges. I have invested and reinvested in relationships and spent a lot of time thinking about how I want the future to look professionally and personally. (To that end, I also got married!)"

'm so grateful to have on the horizon the debut of Dessert Person -- into which I and so many people poured so much love and energy -- on October 20. The team at Clarkson Potter and I put together a digital booklet of bonus recipes that for some reason or another did not make it into the book, but are no less beloved and delicious. For those who pre-order the book, you can get the booklet by clicking the link in bio. (You'll be receiving a PDF, so desktop/laptop is best!)

I hope you enjoy it, and happy baking.

Despite sharing the wedding news, she didn't share any snaps of her marriage. So, we can say that the couple lives a happy life privately. The married couple owns a cabin in upstate New York, which they bought in late 2020. Besides, the pair resides in the Upper West Side neighborhood of New York City.

Claire Saffitz is an active Instagram user whose username is @csaffitz. On IG, she has gained more than 987k followers. From her account, Sasffitz mainly shares her recipes and updates regarding her professional life.

Meanwhile, the chef rarely uploads details of her personal life. As said earlier, she wants to live a low-key life with her husband.