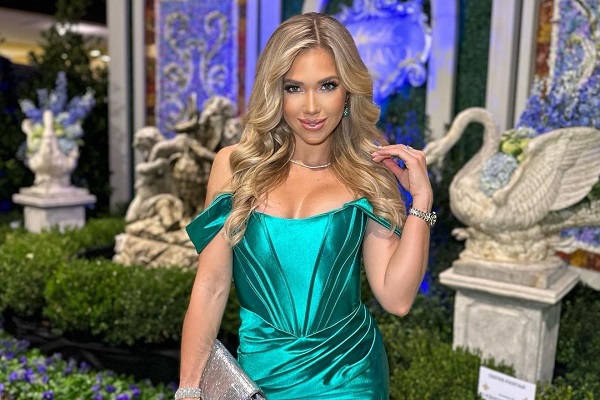 Gracie Hunt is a well-known American model and Instagram star who has gained massive fan followings on social media. Hunt is famous for being an NFL-style spokesmodel and being an ambassador for the Special Olympics.

Being a model, Hunt is doing well in her modeling career. She is the winner of Miss Kansas USA 2021. Apart from her own work,k, Hunt is also recognized as the daughter of Clark Hunt, a part owner, chairman and CEO of the NFL's Kansas City Chiefs. Also, he is known as the founding investor-owner in Major League Soccer.

Despite being a celebrity kid, Hunt has also established a name for herself. So, her fans often ask questions related to her love life. Keep reading till the end to know everything about Gracie Hunt.

According to online reports, Gracie Hunt is currently in a relationship. She lives a blissful life with her boyfriend, Tyler Cameron. Their relationship new sparked in the media when they were spotted enjoying a meal at Dallas' Monarch in January 2022.

It is just a rumor, as both Hunt nor Cameron has not opened their mouth regarding their love life yet. The rumored couple's enjoying meal picture was first released by Deux Moi. Furthermore, Hunt and Cameron have not made a single post on social media regarding their relationship.

Likewise, they have not been spotted being cozy in other places. So, it can't be confirmed whether Cameron and Hunt are dating or not. But fans have already begun talking about the potential couple's love life. Some people also ask what Cameron does for a living.

What does Tyler Cameron Do for a living?

Well, Gracie Hunt's rumored boyfriend, Tyler Cameron, is said to be a model and television personality. In addition to that, Cameron is also a general contractor. Cameron got into the spotlight after appearing in the 15th season of The Bachelorette. In the reality show, he finished second.

Talking about his modeling career, the 29-year-old Cameron started modeling while he was at college. Instantly, he was signed by Soul Artist Management in NYC and Next Management Miami.

Apart from that, the television personality is also famous for appearing in Single Parents, The Bachelor, Good on Paper, and The Real Dirty Dancing. Before coming into the entertainment industry, Cameron was a professional football quarterback. He went to Jupiter Community High School. Later, he attended Wake Forest and Florida Atlantic. After a shoulder injury, Cameron was forced to leave his football career.

Read This: Does The Voice 2022 Winner Bryce Leatherwood Have a Girlfriend? Everything We Know

Gracie Hunt Was Previously in a Relationship With Drew Lock

Gracie and Drew dated each other when Drew was playing in Missouri. Their dating news came into the spotlight when Sports Gossip shared some snaps of them. According to the same report, Hunt admitted that she once dated Drew Lock in the past. And their breakup seemed to be confirmed when the football quarterback moved to Instagram model Natalie Newman.

Gracie Hunt Enjoys a Net Worth in the Six Figures

The social media star and model Gracie Hunt lives a lavish life. She comes from a wealthy family. Apart from that, Hunt has also earned a good amount of money from her own work.

According to Sportskeeda, Hunt has a whopping net worth of around $3 million. She has racked up most of her gains from her short modeling career. Being a social media star, Hunt has also worked with some brands and earns money from brand endorsement. Also, she is part of the Hunt Sports Group.

Click To See: Olena Zelenska Got Into Controversy Due to Her Recent Vogue Cover Photo Shoot – More on Her Husband

Gracie Hunt was born on March 29, 1999, to her parents, Clark Hunt (father) and Tavia Shackles (mother). She was raised alongside her two siblings named, Ava Hunt and Knobel Hunt. Her father, Clark, is a well-known businessman. He is part owner, chairman and CEO of the NFL's Kansas City Chiefs.

On the other hand, her mother, Tavia, is a glamour enthusiast and philanthropist. Also, she was Miss Kansas USA and the second runner-up for Miss USA.