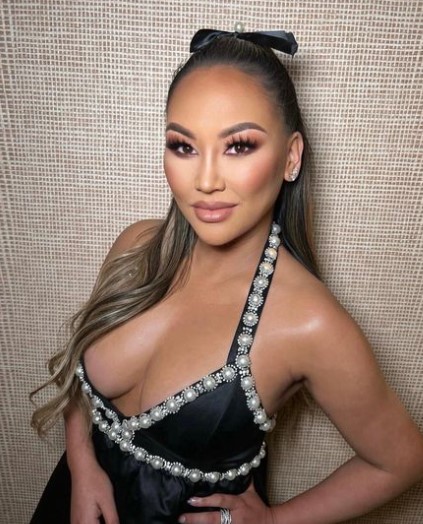 The entrepreneur, designer, and reality TV star, Dorothy Wang is officially the cast member of season 2 of Bling Empire. Dorothy hinted at her debut in the series with an IG post of her in a TV set with the caption, "something's coming".

Born on January 27, 1988, in Beverly Hills, California, USA, Dorothy Wang's age is 34 years as of 2022. Her zodiac sign is an Aquarius. Dorothy's nationality is American and her ethnicity is Taiwanese-Chinese-American. Despite being born in the USA, Dorothy spent the majority of her childhood growing up in China, where her family is originally from.

Dorothy Wang's father is none other than the billionaire mogul Roger Wang who is the CEO of Golden Eagle International Group. Her mother is named Vivien Wang and her sister is Janice Wang. Unlike Dorothy, Janice hasn't been in the public as much. At the age of only 12, Dorothy even became a Goodwill Ambassador of the Nanjing Charity League.

After playing in the reality series called Rich Kids Of Beverly Hills, Dorothy Wang sought a medley of entrepreneurial projects like a jewelry line, and a champagne brand to name a few. Besides, Ms. Wang has also launched a travel guide on her official website.

The actress's father is the Chinese-American businessman Roger Wang. Mr. Wang served as the chairman and former chief executive officer (CEO) of the Golden Eagle International Group. Dorothy's father got rich by building condos around L.A. In 1992, Roger Wang returned to his home country of China and started Golden Eagle. Dorothy's mother Vivien was supportive of her husband throughout his career and ventures.

Moreover, Golden Eagle Retail Group which is Roger Wang's firm's department store arm also trades on the Hong Kong Stock Exchange. In 2007, Dorothy's father Mr. Roger made it to the Forbes' List of billionaires and in The Forbes 400 Richest Americans.

The American reality TV series Bling Empire was released on Netflix on January 15, 2021. The series follows extremely affluent East Asian and East Asian-Americans who are described as the real-life Crazy Rich Asians based in Los Angeles. fun-seekers go all out with parties, glamour, and drama in Los Angeles. Produced by Jeff Jenkins, the series was renewed for a second season which was released on May 13, 2022.

Although the season just started, Dorothy is already in the hots with another co-star of the show Kane Lim. Dorothy spoke on Kane that the star had been trying to get lunch since 2011 but she'd rather fast for 11 days straight. Additionally, Kane Lim also confessed that people like Dorothy only gossip and create drama. At lunch, the duo even gets into an argument during which Kane tells her that they don't have to be friends and can simply go their ways.

Read about: Is Real Estate Investor Armando Montelongo Married? Know All About His Wife And Net Worth

No, the actress has not been married to anyone yet. There has been no information regarding Dorothy walking down the aisle with somebody so far. Besides, Roger Wang's daughter hasn't been previously engaged as well either. However, as of 2022, Dorothy is assumed to be single.

Although the actress is assumed to be single currently, she was said to have an affair with singer/songwriter John Mayer in 2018. The duo was spotted celebrating Ms. Wang's birthday together with her closest friends. However, the pair didn't verify whether they were in a relationship or not.

Previously, Dorothy Wang's boyfriend was Aren Afsharian. Aren even surprised Dorothy with 200 red roses on 2019's valentines day. The duo had even taken a trip to Japan together. However, the couple couldn't work things out and broke up. Before Aren, Dorothy was in a relationship with a French businessman named Sam Saadun. The duo was photographed while vacationing at St. Tropez in July 2017.

Additionally, Dorothy was also rumored to date French Montana. However, the actress labeled those rumors as false and said she had been dating someone else at the time. Another of Dorothy's ex-boyfriends was Cooper Mount. Despite being serious about each other, the two failed to work things out and eventually broke up.

The Bling Empire's actress is said to have a net worth of around $10M. Dorothy's net worth is estimated to grow in the coming days.

Dorothy Wang's social media includes her Instagram page which has over 1M followers. She also uses Facebook which has 242K followers and Twitter which she has 94K followers in total.