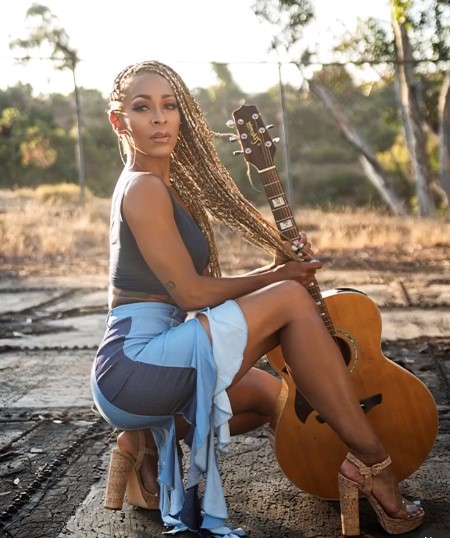 The singer, songwriter, producer, and actress Amina Buddafly is best known for appearing in the hit reality tv series Love and Hip-Hop: New York. The series is the first installment of the Love & Hip Hop franchise that illustrates the typical lives of women who work in the male-dominated world of hip hop.

Amina, whose real name is Aminata Schmahl, appeared from season 4 to season 6 of the franchise. She even appeared as a supporting cast member on the seventh season.

Born on April 18, 1983, in Hamburg, Germany, Amina Buddafly's age is 39 years old. Amina's zodiac sign is Aries. She was born to Senegalese-German parents. Her mother's name is Astrid Schmahl but her father's name is not known. The musician grew alongside her two singlings. She has a twin sister called Jazz Buddafly and an elder sister called Sophie Schmahl.

The three sisters together formed the famous girl group dubbed Black Buddafly. The soul and R&B genre group was discovered in 2002 by producer and manager Orrin Ennis. Orrin signed the sisters to Germany's RCA under the name of Choyce.

3 years later, in 2005, the trio signed to Def Jam Recordings, an American multinational record label owned by Universal Music Group. Under the label, they released singles like "Rock-a-Bye" and "Bad Girl" with the rapper Fabolous.

The tracks were only relatively doing good. In 2006, Sophie left the group and the remaining duo continued with the band. A year after Sophie left, Amina and Jazz ended their contract with Def Jam and signed with MBK Records/J. After being part of the label for 2 years, they ultimately bid it goodbye in 2010.

Eventually, the Black Buddafly disbanded but Amina continued with her solo career. In 2013, Amina was cast at Love & Hip Hop: New York.

Amina joined Love & Hip Hop: New York cast in season four. Her secret marriage to Peter Gunz, another star of the show, is disclosed dramatically early into the season. The shocking revelation takes a violent turn as Tara, Peter's girlfriend of 11 years and the mother of his children, doesn't take the news well. The love triangle between the trio garnered the highest ratings for the show.

During the reunion of the fourth season, Amina reveals that she is pregnant with Peter's child. On July 29, 2014, Amina gave birth to their daughter, Cori Pankey.

In the fifth season, fans see Peter go back and forth with Tara. In Season 6, viewers are left stunned to learn about Amina's second pregnancy by Peter. Although Amina initially decided to have an abortion, she doesn't go ahead with the notion. At the sixth season reunion, Tara and Amina both are known to be pregnant at the same time by Peter Gunz.

2 years later after the birth of her first daughter Cori, Amina welcomed her second daughter, Bronx Pankey on August 9, 2016. At the end of season 7, Amina appears as a supporting cast member and finally ends her relationship with Peter.

Despite the heartache, Amina revealed she doesn't regret her relationship with Peter. Amina even said she considers Peter one of her favorite people and had married him for his personality. As of 2022, Peter and Amina co-parent their two kids.

Don't miss Everything About Comedian Ali Wong's Wiki, Age, Husband, And Net Worth

Personal Life: Who Is Amina Buddafly Dating? Know About Her Boyfriend

The actress seems to be currently single. None of her IG posts or social media handles give any hint of relationships. The musician herself hasn't talked about dating anyone or confirmed any relationships.

After her breakup with Peter Gunz, Amina dated entrepreneur, songwriter, musician, and producer Marty West. It's not clear when the duo broke up but they didn't disclose it to the public. Sometime later, Amina was rumored to be dating a fitness instructor, boxer, and actor Zion. Although, the pair never accepted the allegation or came forth.

In an interview with Flaunt, Amina revealed she doesn't have a boyfriend but is talking to people and seeing some.

On Instagram, Amina has over 2M followers. The singer is also on Twitter with over 237K followers, and Facebook with over 155K followers. Amina also has her own YouTube channel with over 56K subscribers.