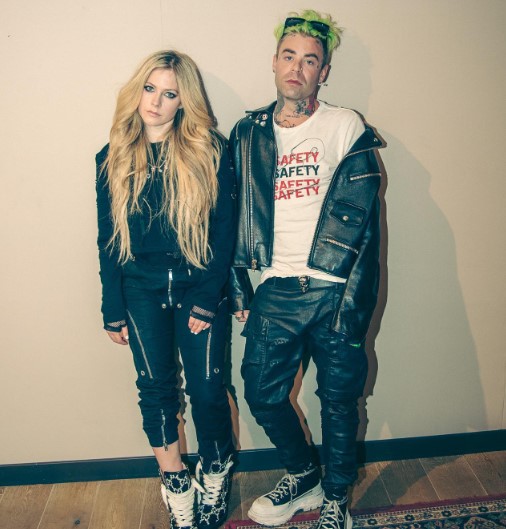 It's finally official! The Canadian singer Avril Lavigne is engaged to American multi-instrumentalist and rapper Derek Ryan Smith, professionally known as Mod Sun. On Thursday, the renowned singer Avril revealed that she got engaged to musician Mod Sun, who had proposed to her in Paris at the end of March.

Is Avril Lavigne Still Together With Mod Sun?

Yes! The Sk8er Boi singer is still in a relationship with her present boyfriend Mod Sun. What's more, the duo just got engaged as well/

Both the singers were first introduced to each other through their mutual friend, Machine Gun Kelly. It was through working together for the song that Avril and Mod got closer and eventually started to go out.

Mod Sun revealed he had to build up the courage to ask the  “Sk8er Boi” singer to work together. After sending her his song "flames", Avril replied that she liked it. Despite Avril's positive reaction, Mod Sun didn't have the guts to ask her if she wanted to work with him on it. Eventually, Mod Sun asked Avril to be on the song and the two worked together. The same month, Mod Sun got tattooed with Avril's name on his neck.

The duo was spotted going on a double date with Machine Gun Kelly and his fiancee Megan Fox.

The Rapper made an IG post where he expressed how much he loved Avril and how lucky he felt to have her on his journey. The singer also stated that he was living his dream. Besides, the rapper posted another picture with Avril captioning, "Everything is a dream when I’m with her".

Additionally, on Mod Sun's girlfriend Avril's birthday, he made an amazing sweet post for her. The Rapper and singer wrote, "Happy birthday to my soulmate, the love of my life, my favorite person in the world…..my angel. To the most radiant + graceful woman I’ve ever laid eyes on, you have made my dreams come true in so many ways. ". He continued, "You are my calm in the chaos + my shelter from the storm. You are elegance + rock n roll wrapped up in one body. I was born without you, dying to find you, I’ll always remind you….I love you with all my heart @avrillavigne + the best is yet to come. Happy birthday my little icon."

Avril continued that when she met Mod Sun, she told him how much she loved his song ‘Karma'. When inquiring about who he wrote it with, the rapper had replied t was John Feldmann, who Avril is a fan of. Knowing that Mod Sun introduced her to him and the three of them instantly hit it along. Besides, the "Complicated" singer even revealed they wrote many songs together and had so much fun.

In April 2022, Lavigne and Sun shared a kiss on the red carpet at the 64th Grammy Awards where Avil was presenting. The cute gesture even caught the attention of many onlookers and admirers. On April 8, 2022, Mod got down on his knee and proposed to the singer.

Avril's boyfriend designed a heart-shaped fitting ring for her. The ecstatic duo got to their respective social media to share the great news with their fans. Mod posted a series of  engagement pictures with Avril and captioned,

The day we met I knew you were the one.
Together forever til our days are done.
I had a dream where I proposed in Paris.
I pulled out a ring + asked you to wear it.
I was on one knee as I looked in your eyes.
You’re too beautiful for my words to describe.
I grabbed your hand + took one last breath…
I said, “will you marry me?” + she said “yes”.

Likewise, Avril took to her own IG page and posted their engagement picture as well.

Read about  What Happened To Renata Ri? Is She Kicked Out From Hype House?

Born on September 27, 1984, in Belleville, Ontario, Canada, the singer and songwriter  Avril Ramona Lavigne is currently 37 years old. Lavigne grew up with her parents and brother and an older brother called Matthew and a younger sister named Michelle. The star has to date released seven studio albums and accepted several awards and nominations, including eight Grammy Award nominations.

Avril played a significant role in the development of pop-punk music and paved the way for female-driven, punk-influenced pop music in the early 2000s. In 2003, Lavigne won an International Achievement Award for her celebrated song called "Complicated" at the SOCAN Awards held in Toronto. Moreover, Avril has a total of 169 awards and sold more than 30 million singles and 40 million copies of her albums worldwide.

The pop-punk singer, Avril Lavigne married Deryck Whibley in 2006. After 4 years, the pair got divorced and went their separate ways. After that, the singer dated Brody Jenner from 2010 for two years of dating before finally splitting in 2012. In 2013, Avril married Chad Kroeger. However, their marriage lasted only 2 years.

In 2018, Lavigne began seeing a billionaire named Phillip Sarofim but broke up with him in 2019. A year later, the singer started to go out with Pete Jonas before eventually breaking up with him in the same year. In 2020, Avril Lavigne had sworn off men after going through a painful breakup and had decided to commit to a solo life. However, life had other plans for the singer as she met her now fiance in late December 2020.

Avril Lavigne's fiance was in a polyamorous relationship with internet celebrity Tana Mongeau and actress Bella Thorne. After the three of them broke up, Mod and Thorne started to date Thorne exclusively. Subsequently, Smith got engaged to Thorne and the pair even got married. However, 15 months into their relationship, the pair got divorced. In early 2020, singer Mod dated Mongeau but broke up with her by the end of the year.