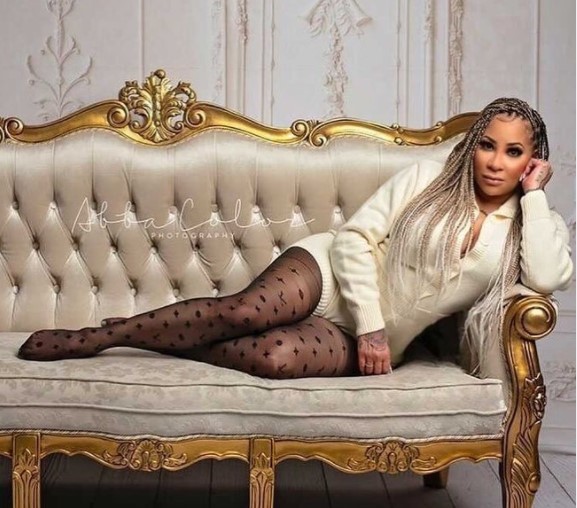 Hazel-E is a rapper, entrepreneur, brand consultant, and reality TV star hailing from Cincinnati, Ohio. She is also the CEO of Girl Code Inc.

Born on April 25, 1980, in Cincinnati, Ohio, USA, Hazel-E's age is 42 years old as of 2022. Hazel-E's real name, or her birth name, is Arica Tiffany Adams. She was raised in Houston, Texas by an African-American mother Angela Cross-Nettles, and her Puerto Rican father. Therefore, Hazel-E's ethnicity is mixed.

Her zodiac sign is a Taurus. The rapper became prominent in the industry after her work as a publicist for other well-known artists like Gnarls Barkley, Tank, and The Boondocks creator Aaron McGruder.

Hazel-E graduated from Southwest Texas State University. After graduation, she subsequently started to release mixtapes and ventured into the acting world as well.

Hazel is featured in Love & Hip-Hop: Hollywood as Tiara's best friend. The two have lived together for several years but are often seen fighting in the series. The first season of the show documents Hazel-E's relationship with rapper Yung Berg who she is in love with.

Despite her affection, the rapper denies their relationship and calls it nothing other than casual sex. Later Berg stars to date Masika which kindles a severe rivalry between the two women that continues throughout the series.

While filming in Dubai in Season 2 of the show, Hazel-E quits mid-way after breaking her nose and having a drink thrown in her face. She even goes as far as to compare the series to a "freak show". However, she returns in a minor supporting role towards the end of season three.

Hazel comes back again to the show in Season 4 as the main cast. She forms a relationship with rapper Rose Burgundy launching what she calls the "Hazel E Stunt Phase".

But Hazel was reportedly sacked from the show after she provoked a vicious feud with almost every member and induced controversy over a series of anti-homosexual and colorist posts on social media.

The reality star Hazel-E married De'Von Waller in September 2020. The marriage was hosted by Hazel's mother in her own home because they wanted to keep it confidential.

A year prior in October 2019, the duo had gotten engaged to one another. Waller proposed Hazel-E with a 10-carat diamond ring which the ecstatic fiancee sowed through a video. What's more, the lovey-dovey pair even have matching hand tattoos.

In October 2021, Hazel-E and her husband De'Von Waller renewed their vows again in Las Vegas. The duo revealed they wanted it to be fun and spontaneous and get that Vegas eloped feel. Hazel also disclosed she wanted her daughter Ava to witness her mom become a bride.

Formerly, before marrying De'Von, Hazel has been in relationships with Rose Burgandy, Katt Williams, Yung Berg, and Ray J.

Also, read our article on  Who Is Brooke Valentine? Explore The Love And Hip Hop: Hollywood Star's Wiki, Net Worth, And Relationships

The actress has gone through the knife dating back to her early day in LHH. She had gotten a nose job after being in an ATV accident. It was also alleged that Hazel-E had work done to her bum and breasts but she never confirmed the rumors until late. The rapper revealed that she had undergone a ‘botched’ surgery in Turkey had encountered complications that could've cost her life.

Hazel's husband De'Von revealed that the doctor had given her fat necrosis which can only be got from a really poor boob job. Furthermore, he added that Hazel couldn't even walk properly and was sent without a wheelchair service.

Never ever mistake her silence for weakness, remember that the air stills, before the onset of a hurricane. ðŸŒŠ Posted by Hazel-E on Wednesday, December 8, 2021

Hazel-E had traveled to Turkey to get a ‘mummy makeover’ which some women get to have their old body back. Hazel had reportedly got the suggestion to do the surgery in Turkey through a friend, Brandi Boyd, a former Love and hip-hop: Hollywood cast member.

After learning about Hazel-E's condition, Brandi took to her Instagram to share an emotional apology where she even mentioned she felt responsible for all this.

Hazel-E's net worth is estimated to be around $1M. According to sources, Love and Hip-Hop Hollywood cast members ake 200,000 dollars per season. The rapper's huge net worth has allowed her to live a luxurious lifestyle with her family of three.