Who Is Wednesday Star Hunter Doohan Married To? Is He Gay? Details To Know 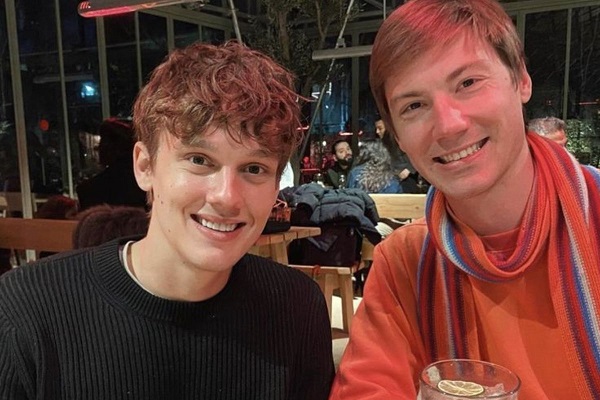 Hunter Doohan is a rising star from the U.S. who has had an active presence in the showbiz industry for quite a while now. Recently, Doohan landed the role of Tyler Galpin in the new Netflix series named Wednesday.

In the series, Doohan's character does not appear straight. Due to this, fans got curious about his sexuality. When people learned about his married life with his partner, many were surprised, and all of them were also happy to hear the news of his marriage. Today, we will take you to the personal life of Hunter Doohan.

Hunter Doohan Is Married To His Partner

Well, Hunter Doohan is married to his partner, Fielder Jewett. The duo has known each other for over two years now. As the couple has kept their love life away from the spotlight, we cannot share when they began dating.

But Doohan shared the first photo with his partner on Instagram in 2018. Since then, both of them have not hesitated to show love to the world. The gay couple loves spending quality time together, and they also love featuring their moments on social media handles.

After dating for some years, Doohan and his partner thought of taking their relationship to the next level. So, Doohan took the step to propose to his partner in 2020. The duo confirmed their engagement on New Year's Eve in 2020. After two years of being engaged, Doohan and Fielder walked down the wedding aisle in June 2022.

Doohan also shared some amazing images on his Instagram account, showing some glimpses of his wedding. Since then, Doohan and Jewett have been sharing the relationship as a married couple. Their married life is going pretty well, and Doohan will surely update his fans with his love life in the coming days. To get updated, we can follow Doohan on Instagram as @hunterdoohan.

Fielder Jewett is not only recognized as the husband of Hunter Doohan but is also doing well in his professional life. He is a student at Loyola Law School in Los Angeles. Meanwhile, he has also worked in some companies in the past.

He worked as an Associate Producer on independent features Imperial Dreams and Bleeding Heart from 2017 to 2021. He also worked as an assistant to producers at Super Crispy Entertainment Inc. It can be said that Jewett also has knowledge of the film industry. In 2011, he graduated from Wesleyan University with B.A. in film study.

Hunter Doohan's sexuality initially left many people confused. When he appeared on Wednesday, viewers were still unknown of his sexuality. But when Doohan announced the news of his marriage to his partner, it became clear. We can say that Doohan is openly gay.

Doohan's character in Wednesday is pretty charming, and many viewers notice that the role matches Doohan's real life. Some of them also took to social media to share their opinion of the series and Doohan's sexuality. Some of them even asked questions as they were eager to know if Doohan was gay. One of them said, "Hunter Doohan is 28 and Gay?"

Moreover, Doohan is proud to be a member of the LGBTQ+.