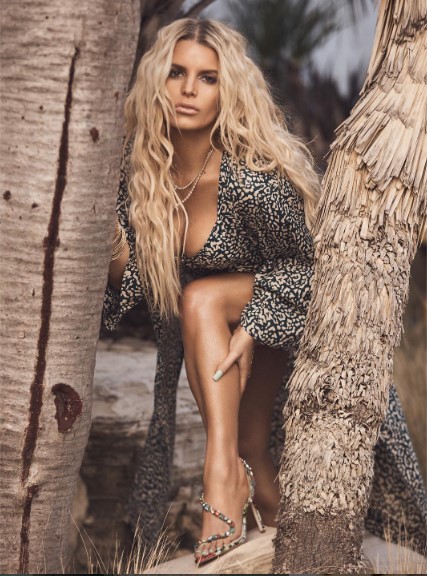 Born on July 10, 1980, in Abilene, Texas, the U.S., Jessica Ann Simpson's age is 41 years old. The actress will be turning 42 this coming July 2022. During her earlier career, Simpson was known for being in a relationship with  Nick Lachey who she even got married to later. The duo even appeared on the MTV reality television series called Newlyweds: Nick and Jessica between the years 2003 and 2005.

Simpson made her film debut in The Dukes of Hazzard in 2005 after the release of her first Christmas album ReJoyce: The Christmas Album 2004. Her album was able to become a certified gold as well. Besides, the actress also launched her fashion clothing line called The Jessica Simpson Collection in 2005.

In September 2019, the actress had shared an IG post where she revealed she was 100 pounds down. Jessica wrote, "Yes, I tipped the scales at 240". On her "The Real" appearance, Jessica mentioned that it took her three years to lose all her weight.

When asked about how she lost her weight, the actress said it was determined patience. Pasternak, who is a nutritionist and helped Jessica before with weight loss, revealed that everything the actress did outside of the gym helped her become lean.

What Was Jessica's Fitness Plan?

Working with two trainers, Pasternak and Sydney Liebes, Simpson's workouts were only 45 minutes per session and three days a week. The trainers integrated strength training and concentrated on slowly increasing volume and intensity over time.

Although they started with limited-intensity full-body workouts, they gradually worked on focusing on a few muscle groups each day. On different days of the week, Jessica focused on different muscles. In the end, it made Jessica Simpson look fuller and helped her lose weight all over her body without targeting any specific area.

As recommended by Pasternak, Simpson got a full seven hours a night. For her diet, the actress made sure to eat three healthy, protein-packed meals a day including two snacks, such as almonds. Instead of cheat days, Jessica had many cheat meals throughout the week so she didn't feel deprived of her favorite foods.

Post-delivery of her third child, Jessica was hitting almost tipping the scales at 240. This was a result of the actress being pregnant non-stop for a decade.

However, Pasternak along with his co-trainer Sydney Liebs worked together to make positive changes right after Jessica welcomed her third child. Her trainers did so by focusing on a more holistic lifestyle approach rather than jumping right into the gym.

On April 8, 2022, Jessica Simpson celebrated her weight loss by sharing a bikini picture on her IG and writing how she had gained and lost 100lbs three times. The actress further added that she'd never thought this moment could or would happen. Additionally, Jessica admitted it was hard work, determination, and self-love that helped her achieve her goal.

The actress's first marriage was to Nick Lachey on October 26 in Austin, Texas. The duo even starred in MTV's Newlyweds: Nick and Jessica which followed the marriage. Premiering on August 19, 2003, the show ran for three whole seasons with a total of 41 episodes. In 2005, the couple announced they were getting a divorce due to irreconcilable differences.

The actress is said to have paid Lachey $12 million in their divorce because she had failed to sign a pre-nuptial agreement before getting hitched.

Who Is Jessica Simpson Married To Presently?

Jessica Simpson's husband Eric Maxwell Johnson started in January 2010. The same year, the pair even announced their engagement. 4 years later, the couple got married on July 5, 2014, at the San Ysidro Ranch, in Montecito, Santa Barbara County, California. Jessica has three children with her husband Eric.

The entrepreneur has three kids as of 2022. Jessica and Eric welcomed their first child named Maxwell Drew Johnson on May 1, 2012. Maxwell is 9 years presently and will be 10 in the coming May. A year later, on June 30, 2013, Jessica gave birth to their second child named Ace Knute Johnson. Ace is 8 years currently.