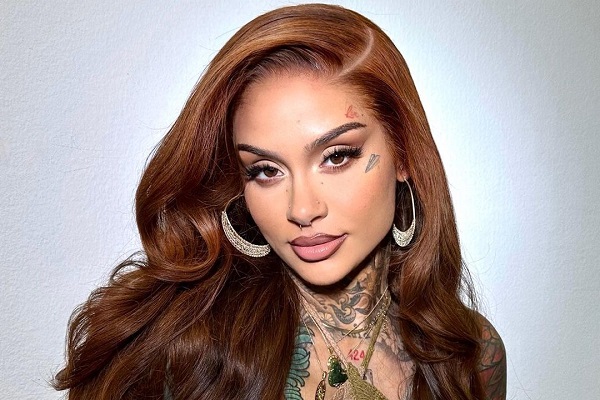 American singer Kehlani is currently making rounds on the internet as she recently confirmed her relationship with her new girlfriend. Her new GF is none other than Kiara Russell. Not to mention, Kehlani is widely famous as a member of the teen group Poplyfe.

She got more into the spotlight after guest starring in The L Word: Generation Q. Likewise, her name went viral on social media in April 2021 when she identified herself as a lesbian. Being a lesbian, Kehlani's fans were eager to know about her love life.

Kehlani was most recently in a relationship with girlfriend 070 Shake. But in September 2022, the 27-year-old singer confirmed her breakup with 070 Shake. Now, she is again in the spotlight with her relationship with Kiara Russell. Keep reading this article to learn more about her love life, sexuality, and past affairs.

Kehlani just went public with her new girlfriend, Kiara Russell. On Christmas day, Kehlani debuted her new partner on TikTok with a cute introduction video to fans. Kehlani posted a video on TikTok in which we can see the new couple chilling on the couch together couch. The singer instructed Kiara to greet her followers, saying, "Say hi to the girls."

Likewise, they posted TikTok videos together but deleted them before publicly announcing they were dating on Sunday. While sharing the video with Kiara, Kehlani wrote, "since yall asked." It revealed their relationship, and they also kissed in a follow-up video.

Not to mention, Kiara Russell is a basketball player born on March 30, 1998. She is a native of Minneapolis, Minnesota. She went to Arizona State University and majored in Sociology. At the school's basketball team Sun Devils, Kiara played as a guard. Now, she is a graduate assistant at Connecticut Huskies women's basketball team.

Kehlani Came Out As Lesbian: Explore Her Sexuality

Kehlani's sexuality has been a matter of concern to many. In April 2018, she said about her sexuality on Twitter. Her Twitter post said that she was queer and was attracted to everyone. During a live stream in early 2021, Kehlani announced that she identified as a lesbian.

In the past, she identified as queer and pansexual. Likewise, she has been asked multiple times about her sexuality, and the singer has always been open about it. Kehlani updated her pronouns on her social media bio to she/they. While talking to Byrdie Magazine in 2021, Kehlani felt pretty awkward when people used "they" pronouns to her.

Click and Read: What Is The Ultimatum Star April Marie's Ethnicity? Find Out Who She's Dating

More on Kehlani's Dating History and Past Affairs

Kehlani has gone through lows and highs in her life, mainly regarding her love life. She had a number of both high-profile and low-key relationships. She was said to be in a relationship with Canadian rapper PartyNextDoor. They were first linked in 2013, but they didn't address their dating life openly.

Later, it was reported that they broke up sometime in 2015 before Kehlani started dating NBA player Kyrie Irving. Kehlani's relationship with Irving was short-lived. It's unknown when they split, but the NBA player emphasized in March 2016 that he was not dating Kehlani at the time of Party's Instagram post.

Likewise, Kehlani dated a painter and tattoo artist Shaina Negrón for several months in 2017. They didn't appear much in the media but were sometimes publicly snapped at. Their breakup date is unknown, but they were last photographed together in November 2017. In the same way, Kehlani dated her guitarist, Javaughn Young-White. Together with him, she also gave birth to a daughter named Adeya. Later, they broke up but continued to co-parent their child.