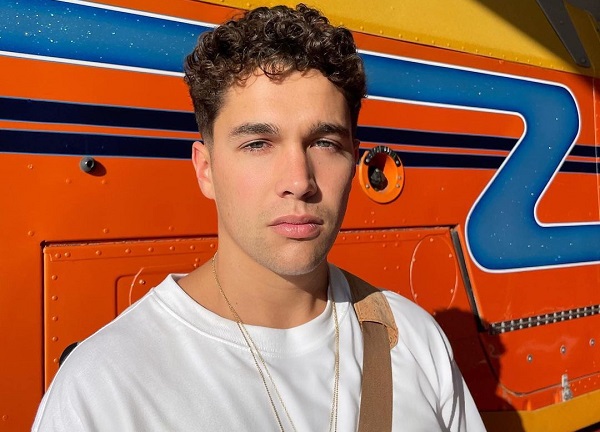 Austin Mahone is a famous American singer and songwriter who got into media prominence for performing covers of pop songs on YouTube. Since 2010, Mahone has been actively working in this field and is making music.

Mahone just shot his shot with Amanda Diaz. At the same time, fans were unaware if they were still dating.

So, Cyr just called out Mahone for hitting on the girl he was dating and confirmed that he and Amanda are still together in just one TikTok.

So, now, fans are confused about the drama between Austin Mahone and Kio Cyr. Collecting every detail available, we've elaborated everything here. So, keep reading till the end.

Amanda Diaz posted a video on TikTok on August 21, 2022. In the respective video, she wrote, "when he's a walking red flag but has green eyes" and captioned it "guilty." From this, it becomes clear that Diaz had a weakness for men with green eyes.

So, people in the comment section began asking questions if her boyfriend had green eyes or not. During that time, Austin Mahone gained people's attention, who also reacted to the respective video.

Mahone showed off his green eyes and wrote, "Wassup then?" Not only that, but he also tagged the same video to Diaz, which created drama on the Internet.

And now, all of their fans were waiting for the reaction of Diaz's boyfriend, Kio Cyr, who has already responded.

You may also read: How Much Is Brittney Griner’s Net Worth? Take a Look at Her Career Earnings and Relationship

Kio Cyr Responded to Austin Mahone Hitting On His Girlfriend

Kio Cyr responded to Austin Mahone the following day after the release of the video.

Cyr took the footage of Mahone; after that, the video switched to him and his girlfriend in a room staying together.

In the respective clip, we can see Diaz lying on the bed using her phone.

On the other hand, Cyr was propped up in a chair. Later, he said that he chose peace to avoid violence. After that, people knew that it was a response to Mahone, as he also tagged Mahone.

So, fans were surprised by his reaction, and all of them also left various opinions in the comment section. The drama got more hype when Mahone also commented in the video of Cyr saying, I am a lover too."

The comment pretty much specifies how he was hitting on Cyr's girl who he had been dating.

Likewise, fans were waiting for the response from Cyr's girlfriend, Amanda Diaz.

As said earlier, fans got reactions from both Austin Mahone and Kio Cyr, but they were waiting to hear from Cyr's girlfriend, Amanda Diaz.

Later, Mahone said it was all good, and there was no problem between them.

Apart from that, Diaz has not talked anything about this topic, but she has been posting clips frequently with her boyfriend, Kio Cyr.

Furthermore, Kio and Amanda have been in a relationship for some time now, but there were once rumors about their breakup.

However, they have not separated as they still lead a happy life together. Amanda and Kio both shares their snaps on their Instagram handle, where we can find Kio as @kiocyr and his girlfriend as @amandadiaz.

For your information, the TikTok star was previously in a relationship with Olivia Ponton.

They dated in 2020 and later broke up. And now, Cyr lives happily with his lover, Diaz. Also, fans are happy to see them together, and they admire the pair a lot.