Lewis Howes and His Girlfriend, Martha Higareda Are Dating Happily 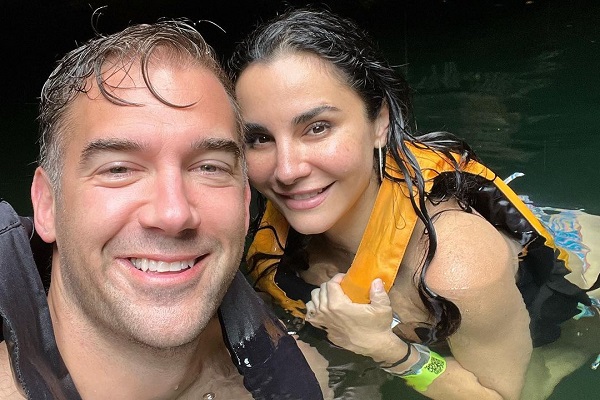 Once, Howes was in the limelight for his relationship with Yanet Gracia. They are no longer together, and both of them have moved on from it. Howes is also busy with his life and has already found the love of his life.

So, who is his new girlfriend? Keep reading today's article till the end to know everything about his love life.

Well, Lewis Howes has finally found a new lady in his life, and she is none other than Martha Higareda. Initially, fans were confused about their relationship, and some of them even thought that Howes had a new lady. But he never talked about it openly.

When Howes shared some pictures with Martha on October 2021, their dating rumors sparked. In the post, he thanked Higareda after his teeth surgery. Later, he detailed his teeth's condition and also revealed that Higareda was taking care of them. Just after a month, on November 2021, it was officially confirmed that Howes and Higareda were dating.

After making their relationship official, Howes and Higareda went to different places and events. They also did salsa dancing at Sofitel. Not only that, but the lovebirds went to watch some UFC fights of MMA fighters like Dustin Poirier and Canelo Alvarez. Now, they have been together for quite a while, and their love life is also going smoothly.

Lewis Howes and Martha Higareda have been supporting each other for quite a while now. On June 2022, the couple celebrated their one year of the first meeting. Also, Howes took to Instagram to share some lovely messages and snaps with his girlfriend. On June 7, 2022, he shared some images with Higareda. Howes captioned it,

"Crazy to think that I met @marthahigaredaoficial one year ago, with no plan or agenda - and how much richer life has become since she's been in my life
"I remember years ago having a dream of meeting someone as into growth and learning like I am (believe it or not, she's more into it than me!)
"I remember thinking I'd love to meet someone who wants to go to therapy early in the dating process, not because we had problems, but to get clear on shared values and vision.
"I remember thinking what it would be like to be fully accepted for who I am… all my weirdness, all my flaws, and all my wild dreams and drive.
"I remember dreaming about what it would be like to come home to a place of peace, joy and adventure.
"I remember visualizing waking up each morning next to someone who genuinely loves life and finds meaning even in the darkest moments.
"Every day I'm inspired by the person Martha is in her personal life with friends and family, and the passion she has for her career and the impact she makes on the world.
"The favorite part of my day is the moment I open my eyes in the morning … because you wake up with a smile, and your smile never gets old. Te amo muchísimo amor and the adventures are just getting started

Howes posted multiple images of the couple's trip to Mexico. Likewise, Higareda also marked their first meetaversary by posting some moments of their different trips. Moreover, the couple still lives happily, and we can get more updates about their ongoing life by following them on social media.

Apart from that, Howes had some past affairs. So, let's take a look at it.

Details on Lewis Howes Past Relationship and Breakup

Lewis Howes was in a long-term relationship with Whitney Miller. After dating each other for seven years, Howes and Miller chose the path of breaking up. In August 2019, Howes also talked about his past relationship with Miller.

After that, Howes went on to date another lady named Yanet Garcia. The former pair officially began dating on January 17, 2019. But they decided to announce their relationship in their first years of togetherness. After that, they used to share pictures on Instagram.

But around early 2021, both of them stopped posting pictures which left people thinking that they might have parted away. They didn't officially announce their breakup, but when one fan asked Garcia if she had a boyfriend, then she replied, No. This made it clear that Howes and Garcia were no longer together.

Now, Howes is on his own way living happily with his girlfriend, Martha Higareda.