Who Is Lionel Messi Wife Antonela Roccuzzo? Everything About Their Relationship Timeline, Marriage, and Kids 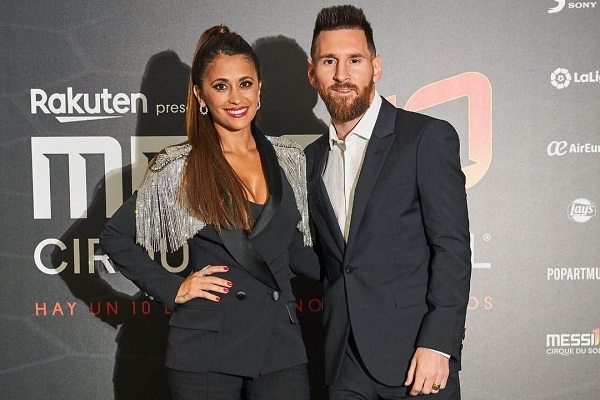 Antonela Roccuzzo is an Argentine model and businesswoman who gained widespread recognition after being recognized as the wife of football star Lionel Messi. Also, she is a social media influencer who has gained a massive fan base on her self-titled Instagram account.

As we know, Roccuzzo got famous as the wife of Lionel Messi. So, people are eager to learn about their love life. Here we will discuss their married life but first, let's find out what Roccuzo does.

Antonela Roccuzzo is the loving and stunning wife of Argentine footballer Lionel Messi. Roccuzzo was born on February 26, 1988, in Santa Fe, Argentina. So she holds Argentine nationality and her age is 34. The celebrity spouse was raised by her parents, Jose Ruben Roccuzzo (father) and Patricia Blanco (mother).

By profession, Roccuzzo is said to be a model. Also, her Instagram bio shows that she is running a business named Mama Luma, a clothing line. Now, let's move on to the love life of Antonela Roccuzzo.

Read More: Who Is Magi Sadeq? Children And Age Of Mohamed Salah Wife

Well, Antonela Roccuzzo and Lionel Messi are childhood sweethearts. The power couple has known each other since their childhood. For your information, Roccuzzo and Messi grew up in the same hometown.

The married couple met each other through Messi's friend and Roccuzzo's cousin Lucas Scaglia. Lucas played soccer with Messi in the early days. Roccuzzo and Messi fell for each other at the age of nine. However, Messi moved to Spain in his teenage years to play for the youth team Barcelona.

And the duo reconnected after Antonela's best friend, Ursula Notz, sadly passed away in a car accident. After hearing the tragic news, Messi moved to his home country to console Antonela. Moreover, Roccuzzo and Messi kept their relationship private for a year in 2008. And in 2009, their relationship was revealed after confirming in an interview.

During that time, Roccuzzo was pursuing a career in dentistry but moved to Messi's house in Castelldefels, Barcelona.

Antonela Roccuzzo and Lionel Messi Married In A Lavish Ceremony

After dating each other for some years, Antonela Roccuzzo and Lionel Messi thought of taking their relationship to the next level. So in 2010, the footballer took the first step to proposing to Roccuzzo.

The couple had good times together exploring different places together. After being engaged for a couple of years, Roccuzzo and Messi tied the knot on June 30, 2017, in their hometown of Rosario, Argentina. Their wedding ceremony was held in the hotel City Center.

The lavish wedding ceremony was attended by Messi's close mates, including Neymar and Sergio Agüero. Many outlets also dubbed their wedding as the Wedding of the Century. Since then, Roccuzzo and Messi have been sharing the relationship of a wife and a husband. We can see them having a good time together, and there is no sign of breakups or separation.

Antonela Roccuzzo and Lionel Messi Are The Parents Of Three Children

Before getting married, Antonela Roccuzzo and Lionel Messi had started a family of their own. In June 2012, the duo announced that they were expecting their first child. And on November 2, 2012, the married couple became parents for the first time after welcoming a son named Thiago.

After three years, in September 2015, Roccuzzo gave birth to another child Mateo. A family of four was increased to five when their third son named, Ciro, was born on March 11, 2018. So, now the family of five lives happily, and the footballer also share their moments on IG, where we can find him as @leomessi.