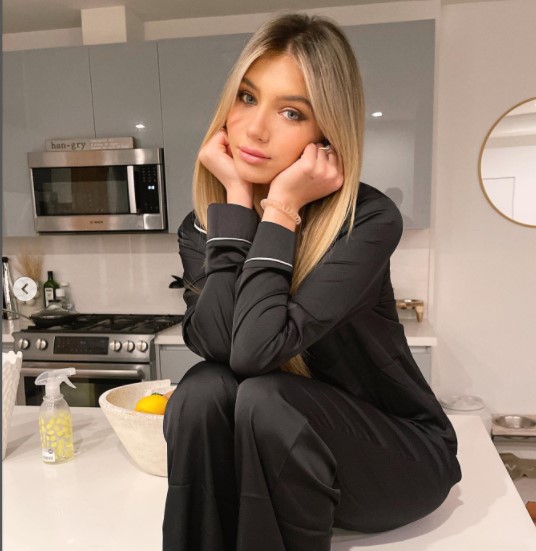 Mads Lewis, also known as Madison Lewis, is a rising Tiktok star, Youtuber, TV personality, actress, content creator, and social media influencer. The 19-year-old Madison went viral on Tiktok through her lip-sync videos. Today she has become one of the popular influencers on the platform.

The influencer was born on December 24th, 2002, in Phoenix, Arizona as Madison Lewis. She is currently 19 years old and will be turning 20 this coming December 24. Her zodiac sign is Capricorn. The TikTok star did her early schooling at a local high school in her hometown of Arizona, United States.

Not much is known about Mads Lewis's parents. However, it's alleged that Madison's father is a businessman while her mother is a fashion designer. Besides, the influencer also has two more siblings; a brother named Dakota Lewis and a sister named Rilley Lewis. However, not much information is available on Mads Lewis's sibling's life.

What Is TikToker Mads Lewis Age?

The stunning influencer is currently 19 years old and shares her birthday with her two siblings Dakota and Riley. Mads is the youngest of the triplets.

Who Is Mads Lewis Dating?

At the moment, Mads Lewis's dating no one. She is assumed to be single. But whether the actress is dating someone confidentially or is enjoying her single life only time will tell. Previously, Mads Lewis dated Christian Plourde, Jaden Hossler, and Charles Gitnick.

The famous Tiktok star Mads Lewis began dating Christian Plourde after breaking up with her ex-boyfriend Jaden Hossler. Madison's ex-boyfriend Jaden is a prominent TikToker, American singer, and songwriter. Madison confirmed dating Plourde with People magazine in July 2021. The duo is said to have met for the first time at the content house called Just a House LA. Back then, Mads was still in a relationship with Jaden.

â™¬ Just for me - PinkPantheress

Three months after Lewis' breakup with Jaden, she got into a relationship with Plourde. However, the duo seems to have parted ways. Despite Madison and Plourde not giving out an official confirmation of their breakup, they have already unfollowed each other on their social media handles. Before this, on January 19, an alleged tweet made by Mads went viral on social media platforms that reads

Jaden will always know where home is. my forever.

The since-deleted tweet has been circulating everywhere with fans saying Lewis had gone too far and was trying too hard. Although Lewis clarified that the Tweet was "obviously fake", Plourde's fans blasted her for taking him for granted.

No, the TikTok celebrity isn't married to anyone. Neither is Madison Lewis engaged as of yet. However, when the YouTuber was in a relationship with Plourde, she had revealed in an interview with The Rundown that she saw herself walking down the aisle with boyfriend Plourde someday.

Unfortunately, the news about the duo's breakup started spreading in February 2022 and they have both unfollowed each other ever since.

The influncer is on Tiktok with a huge fiollowing of 12.6M. Mads joined TikTok when it used to be called Musical.ly.As of March 2022, the popular content creator has over 420M likes on her page. Besides, Mads is also on Instagram where she has 6.9M following in total. Mads Twitter account has 1.1M followers.

Moreover, Mads also uploads videos on her youtube channel where she has 506K subscribers.

Tiktoker Mads Lewis's net worth is estimated to be around $3-$4M. Lewis makes most of her money through her social media channels. Additionally, the star also made her acting debut in a comedy movie called Alexander IRL. Besides, she also played roles in Chicken Girls (2017) and Home Economics (2021).