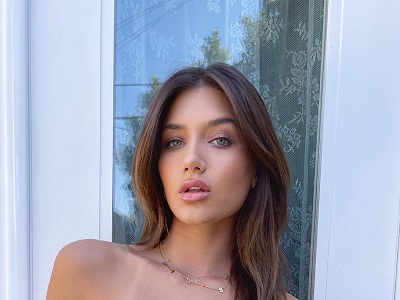 Mads Lewis is a famous social media influencer and Instagram model who has gained more than 6.8 million followers on her self-titled Instagram account. She is also a member of the Just A House content collective.

Besides being famous on TikTok and Instagram, Lewis also has a YouTube channel where she uploads various content, including makeup videos and challenges. The young social media star is currently in the limelight and is getting a lot of support from people as she talked about the sexual assault allegations in the recent episode of the BFF podcast.

While many people are aware of the situation, some of them are still confused and are not familiar with it. So, here we've discussed the whole scenario and her recent statement made on BFF.

What's Going On Between Mads Lewis and Tayler Holder?

On September 15, 2022, Mads Lewis went to the podcast BFFs with Dave Portnoy, Josh Richards, and Bri Chickenfry. They discussed various topics, including her never being interested in Josh, her new boyfriend and what people are saying about them, the Columbian relationship with Dave's girlfriend, and the reboot of her fan-favorite show "Chicken Girls."

In the podcast, she also talked about Tayler Holder's sexual allegations. So, Lewis hinted that she was one of Holder's alleged sexual assault victims. Not only that, but Lewis believed the accusations against him to be true.

When Portnoy asked Lewis if that meant that all her allegations against Holder were correct, the TikTok star replied, "Yes." As soon as the episode went live, viewers began supporting Lewis on social media. Also, some of them said she was one of the victims of Tayler Holder. Due to this reason, Lewis is currently in the people's eyes and is getting support from all of them.

On September 17, Tayler Holder responded to all those comments in a YouTube video named addressing the rumors. Holder admitted in the video that he had never been with an underage girl and had never had a non-consensual sexual connection with anyone.

In the same video, Holder talked about the comment made by Mads Lewis, and again, he denied it. To get more details, we can watch his video on YouTube.

Tayler Holder has been a victim of this for a long time. In the past, too, Holder has received major backlash as many allegations have hovered against him.

In early 2022, many social media influencers, including his close friends, left him, and they also unfollowed him on social media. After some time, it was revealed that Holder was being accused of sexual assault. Despite that, none of the sexual assault victims opened up about it. Despite all the allegations, Holder has always denied them.

Trusted Source tells #DramaAlert Tayler Holder will be facing serious allegations from multiple Alleged victims. #DramaAlert is still working to gather all the details. Normally would not even tweet this much at this stage. But Taylor confirmed allegations were made on BFFs. pic.twitter.com/i6Z7WlcfBb — KEEM ðŸ¿ (@KEEMSTAR) February 2, 2022

In May 2022, he also gave an interview with TMZ. In the respective interview, Holder admitted that he never publicly faced any accusation from any individual, law enforcement, or attorney. Apart from that, the whole situation started when YouTube's Drama Alert's host Daniel Keemstar said that sources had made horrendous allegations against Holder.

For your information, Holder also went to the BBF podcast, and in the podcast, Holder said that he is handling all these matters off the screen.