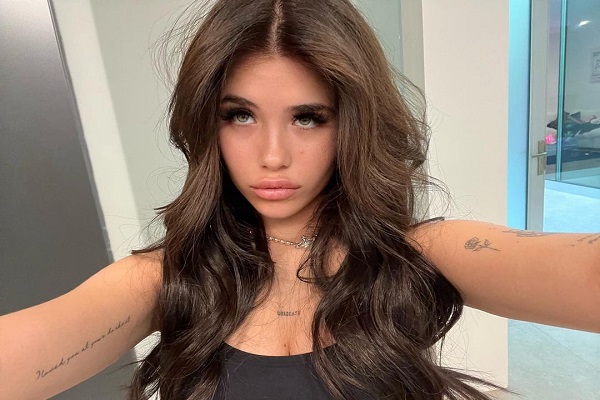 American singer Nessa Barrett entered the people's eyes in 2019 after launching her TikTok account. She makes videos and shares them on the platform. Like many celebrities, Barrett also makes rounds on the internet for her personal life. Once Barrett made headlines after revealing her relationship with Jaden Hossler.

She and Hossler also had matching tattoos. But their relationship came to an end in May 2022. After that, Barrett led a solitary life and prioritized her musical career. Now, it seems like Barret has moved on from breakup with Hossler and has found a new boyfriend. She shared the cozy image with her new love and appeared happy with him.

So, keep reading to know more about Nessa Barrett's love life which we've discussed in depth.

Looking at the recent Instagram post of Nessa Barrett, it seems like she is in a relationship with a new boyfriend, Harley Solomon. The dating rumors sparked in November 2022 when Barrett posted an Instagram Stories post with a man's arm holding on to her waist.

Nearly a week after the first peek of Solomon on Instagram, Barrett shared a series of pictures, one of which included Solomon carrying her. She also tagged Solomon. In the image, we can see Barrett resting her head on Solomon's shoulder. Barret has not talked about anything officially, but fans have already said they are in a relationship. The photo shared by Barrett was reported by a fan account on Instagram.

So, Barrett and Solomon might be dating secretly. However, the duo may give some updates about their dating life in the future. So, to get updated with it, we can follow Barret on Instagram as @nessabarrett. Besides that, some of Barrett's fans are unknown who Solomon is. Keep reading to find out.

Harley Solomon is an internet star who has a decent fan base on his Instagram account. He is registered on Instagram as @tootonebooch and has amassed over 53.5k followers.

From his account, Solomon shares a snap of his daily lifestyle. Furthermore, Solomon rose to fame, and he is now recognized as the boyfriend of Nessa Barrett. Apart from that, Barret was previously in a relationship with Jaden Hossler. Let's take a look at her past relationship.

Related: Nessa Barrett Tattoos Are Tributes to Her Boyfriend – Everything You Need To Know!

Well, Nessa Barrett and Jaden Hossler sparked dating rumors in February 2021. They released their song named La Di Die. In June 2021, Hossler confirmed that he was Nessa's boyfriend. After that, their love life went well, and they also appeared in various events together.

They also performed together in various television shows. When both of them got matching tattoos, fans were surprised. They went through many ups and downs during their relationship. Later in April 2022, the duo unfollowed each other on Instagram, which created their split rumor. And later, Barrett and Hossler shared a joint statement via Instagram Stories announcing their breakup.

Now, both of them are happy in their own life and are doing pretty well.