Sam Jaeger & His Wife Amber's Divorce Rumor: Did They End Their Married Life? 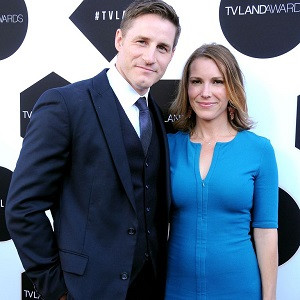 Sam Jaeger is one of the most loved American actors who has had an active presence in the showbiz industry for over a decade.

In 1999, Jaeger made his debut on the big screen by appearing as a Waiter in a tv movie called Double Platinum.

We can see his amazing work in other films and tv series like Lucky Number Slevin, Take Me Home, Inherent Vice, and American Sniper.

Apart from that, Jaeger is also a talented screenwriter who has worked on multiple projects that have done pretty well in the industry.

Jaeger is also the winner of various prestigious awards, including the Copper Wing Award, which he won in 2017 for his work in Brave New Jersey.

So, his multiple works have helped him accumulate a massive name and fame. Fans from all around the globe often ask questions related to his married life. Keep reading to learn more about his affair, married, and dating life.

Starting with their love life, Same Jaeger and Amber Marie Mellot have been with each other for a long time. The power couple first met each other at Otterbein College. So, it can be said that they are college sweethearts.

After knowing each other, Sam and Amber fell in love and began their romance. However, it is unknown when they started dating.

But we can say that Jaeger and Amber share a strong bond, and after being in a romantic relationship for some years, the twosome thought of taking their relationship to the next level.

"We're either going deeper in, or further out of every relationship" Actor @Sam_Jaeger makes our hearts pitter-patter with beautiful words for his wife. ðŸ’• We are SO voting for him on the @netflix show #ThePoliticianSeason2#couplegoals #CommonCanyon https://t.co/YM2fTyphoD pic.twitter.com/Z68Brvzwsn — KTLA Entertainment (@ktlaENT) June 22, 2020

They decided to get married and share the relationship of a husband and a wife.

Sam Jaeger and Amber Married in a Private Wedding Ceremony

Moving onwards, Sam Jaeger and Amber walked down the wedding aisle on August 25, 2007. The twosome got married in an intimate wedding ceremony which was attended by their family, friends, and relatives.

The wedding ceremony was organized at the Crockett's Run Resort in Logan, Ohio. They had a double-ring outdoor ceremony. Since then, Sam and Amber have been sharing the relationship of a husband and a wife.

Their married life has been admired by many people, and they are still doing great in their life.

You May Read: Does Hannah Dodd Have a Boyfriend? Insights on Her Dating Rumors & Net Worth

Sam Jaeger and Amber Lives With Their Kids

In addition to that, Amber has a stepdaughter named Aubrey, who was born in her past marriage.

Well, some people on the internet were asking about the divorce of Sam Jaeger and his wife, Amber. There were some buzzes going around which said that they were getting divorced.

However, it just remained a rumor as Sam and Amber are still married, and there is no fact about them getting divorced. The divorce rumor just circulated without any points.

Furthermore, Jaeger and his wife live a low-key life keeping themselves away from media sources. So, it is believed that the pair is happy with each other in private, and their relationship is growing daily.

And finally, the team of Celebrityshine also wishes them all the best for their future.