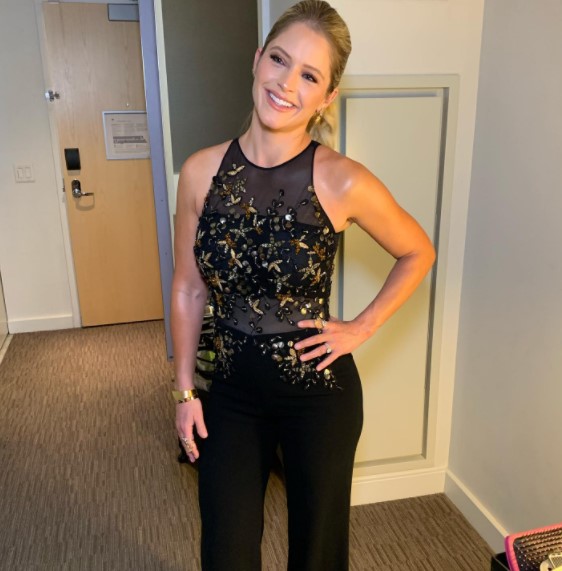 The American television host plus journalist Sara Hilary Haines is prominent for co-hosting the ABC daytime talk shows like The View and Strahan, Sara and Keke, and The Chase game show. Recently, Sara's pregnancy rumors made rounds on the internet with fans asking for confirmation from the journalist herself. However, the rumors seem to be false.

Born September 18, 1977, in Newton, Iowa, U.S, Sara Haines is 44 years old. The TV host is of American nationality and her ethnicity is white. Her father's name is Dick Haines and her mother's name is Sandy Haines. Sara Haines's height is 167 cm. The journalist has three other siblings as well; two sisters Susanne and Kathy, and a brother Joe Haines. However, not much is known about Sara's siblings.

Sara attended Smith College in Northampton, Massachusetts from 1996 to 2000 from where she acquired her Bachelor of Arts degree in government in. At Smith, Haines was very active in sports and was involved in basketball and volleyball.

Who Is Sara Haines's Twin Sister?

The tv host doesn't have a twin sister of her own. However, Sara joked about being 'twinsies' with Ginger Zee, an American television personality after the duo wore the same shirt on ABC news.

The journalist Sara married Max Shifrin who works as an attorney on 22 November 2014. The couple has been married for 7 years already and lives together in Brooklyn with their three children. Sara's husband Max is five years younger than her. The couple met each other on OkCupid, a U.S.-based online dating website. and eventually started going out.

The couple had their first child, Alec Richard in March 2016. Alec is currently 6 years old. A year later, Sara gave birth to her second child, Sandra Grace, in December 2017. Sara and her husband Max's third child Caleb Joseph was born in June 2019.

At Us Weekly Most Stylish New Yorkers held at Cathédrale at Moxy East Village, the TV host shared her fitness plan for losing pregnancy weight. Sara revealed that during pregnancy, she tried not to overindulge in eating so she wouldn't gain more weight post-pregnancy. Haines also said that she did some toning exercises and got steps to lose weight.

After Sara uploaded a picture post-pregnancy, fans quickly flooded her IG asking Sara how she lost so much weight in such a short time and even asked the journalist for tips.

Check our article on: Who Is Fox Nation Host Johnny “Joey” Jones? Know His Married Life And Wife Meg Garrison

No, the TV host isn't pregnant again. On 3rd March 2020, Sara took to her Instagram account to talk about the body harassment that she had been facing online as well as offline. After Sara's little belly pooch was seen, people quickly assumed she was pregnant and even made assumptions about her expecting a child.

Sara then made an IG post regarding such comments and wrote that it was flat-out body shaming to tell someone they looked pregnant. She even added the hashtags  #bebetterand  #liftwomenup.

The TV host is active on her Instagram account where she has over 346K followers. Likewise, Sara is on Facebook too where she has 92K followers and on Twitter with over 561K followers. Due to her massive social media following, Sara exerts quite an influence on the internet.

Sara Haines's net worth is estimated to be around $8M. The TV presenter has accumulated her wealth through hosting and journalism.