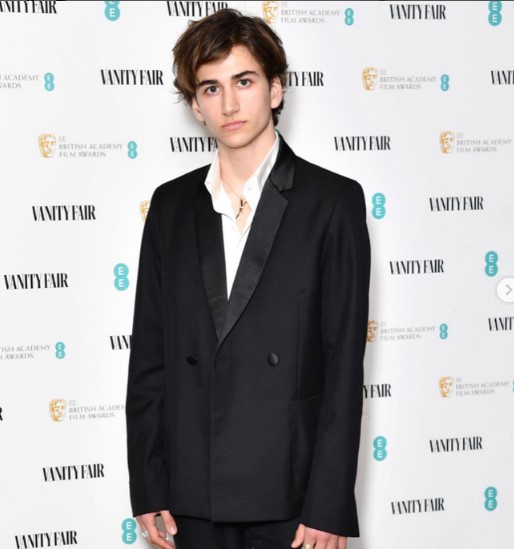 The British actor Sebastian Croft has established quite a name for himself in the industry. The actor portrayed young Eddard Stark in the sixth season of the fantasy series called Game Of Thrones. As of the present, Sebastian Craft is playing the role of Benjamin Ben Hope on the popular LGBTQ+ series Heartstopper.

Born on 16 December 2001 in Oxford England, Sebastian Croft's age is 20 years. His zodiac sign is Sagittarius. Sebastian Croft's full name is Sebastian Theodore Kemble Croft. He wanted to become an actor ever since he was a child. At the age of 7, Croft was already taking classes at the Abingdon-on-Thames branch of Stagecoach. For his education, the actor went to the Dragon School for preparatory school.

Kit your mum says hi… Thank you @BAFTA for the most incredible evening â¤ï¸ pic.twitter.com/C5hTKAs4lx

Eventually, he joined St Edward's School, Oxford for GCSEs from where he completed his A-Levels in English, Philosophy, and Film.

The Heartstopper actor Sebastian Croft's father is named John Croft who is a businessman. His Greek Cypriot mother Doulla Croft is working as an executive at Facebook. Additionally, Sebastian is reportedly a direct descendant of John Philip Kemble, an actor, and manager of the Theatre Royal Drury Lane.

What Is Heartstopper Sebastian's Ethnicity?

The actor holds a mixed ethnicity of half English and half Greek.

The actor hasn't made any comments about his sexuality yet. Therefore, Sebastian's sexuality or what he identifies with is not known to date. However, in the heartstopper series, Sebastian plays the role of Ben Hope.

Read about  Everything About Heartstopper's William Gao Wikipedia, Ethnicity, Gay, Partner, Net Worth

Who Is Sebastian Croft Dating?

The actor hasn't revealed anything about his dating life. However, Sebastian has been enthusiastically shipped with his fellow co-actor Joe Locke by fans of the series. Despite having a toxic relationship in Heartstopper, the duo's friendship in real life left fans guessing whether they were simply just friends.

Many fans have asked the actors to reveal if they're in a relationship but both haven't spoken about it.

Sebastian Croft In Game Of Thrones

George R. R. Martin's novel called A Song of Ice and Fire was adapted into an American fantasy drama TV series Game Of Thrones in April 2011. Due to its massive popularity, GOT was even named one of the most popular series by critics.

Additionally, it even received 59 Primetime Emmy Awards which is the most for a drama series. Other awards include Outstanding Drama Series in 2015, 2016, 2018, and 2019, three Hugo Awards for Best Dramatic Presentation, a Peabody Award, and five nominations for the Golden Globe Award for Best Television Series.

Sebastian Croft rose to prominence following his cast in the sixth season of the HBO series Game Of Thrones. The actor played young Eddard Stark in the show. It's been revealed that Sebastian binge-watched all 50 episodes of  Seasons 1 to 5, in 10 days to prepare for the role.

As of 2022, the actor's net worth is estimated to be around $1M to $5M. Sebastian's major source of earnings comes from his successful acting career. Besides GOT and Heartstopper, Croft has also played in Horrible Histories: The Movie- Rotten Romans, The Hippopotamus, Where Is Anne Frank, Penny Dreadful, Doom Patrol, to name a few.