Sophia Hill Announce Her Engagement With Her Boyfriend, Taylor Watts 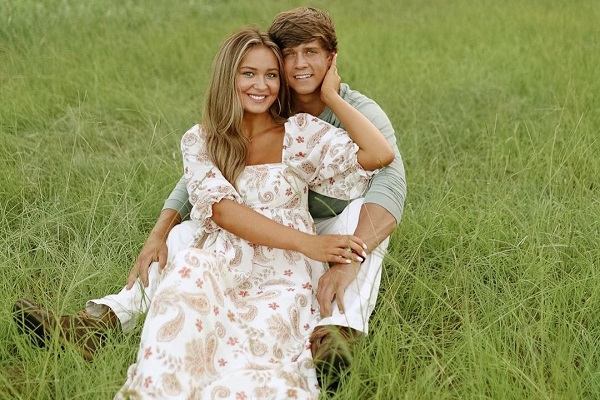 TikTok's favorite couple, Sophia Hill and Taylor Watts, got engaged, and their fans celebrate the happy news. Sophia is one of the most loved TikTok stars who has gained a massive fan base. From her account, she does not hesitate to show her love.

Sophia and her fiance are so inseparable that the duo share video on the same TikTok page. Their joint TikTok account has garnered over 3.8 million followers and has over 143 million likes on their videos. When the couple recently shared the news of their engagement, fans were shocked, and all of them congratulated the duo.

So, now, people are concerned about their relationship timelines and wedding plans. Here's everything you need to know about their love life.

Recently, Sophia Hill announced her engagement with her boyfriend, Taylor Watts. The announcement came on November 29, 2022, on all of their social media handles. Sophia first hinted at their engagement to viewers when she posted a short clip on her Instagram handle telling her fans that the proposal video would be posted soon.

Afterward, she shared a TikTok video with her boyfriend showing her engagement ring. Moreover, their engagement was confirmed when Hill posted a series of her engaged moments. The duo captioned the image, "We're Engaged."

"One of the happiest days of our lives. We are OVER the moon excited & just so so in love with each other. God has blessed us in so many ways & we couldn't be more grateful. Can't wait for forever together! Many more pictures to come"

Now, the engaged couple is getting many messages from their fans as they are happy to see their relationship going to another level. One of their followers said, "Your relationship is what everyone strives for." Also, the duo has posted a video on YouTube regarding their engagement which has gained over 45k views at the time of this post.

See This: Who Is Wednesday Star Hunter Doohan Married To? Is He Gay? Details To Know

After being engaged, Sophia Hill and Taylor Watts are now planning for their wedding. When they shared their engagement pictures on social media, Hill also expressed her happiness by saying, "LET'S GET MARRIED! & then have BABIES! like asap."

So, we can expect that the duo may give some happy news in the future. Also, fans are eagerly waiting for the announcement. Besides, we will also keep you updated with their love life. Now, let's explore their relationship timeline.

Also Read: Is Ross Butler Dating Madelyn Cline? Everything About The Dating Rumor Of The Star

Everything on Sophia Hill and Taylor Watts Relationship Timeline

Moving into their love life, Sophia Hill and Taylor Watts is one of the most loved couples on TikTok. Their contents are loved by many. It's been just over two years since they met. The couple has not given much information regarding how they met.

But some online sources report that Hill and Watts began dating each other in 2020. Since then, they have been with each other and now, their relationship has gone to the next level. It may soon turn into marriage, as the pair recently got engaged.

Besides that, their age has also left many people curious. Watts was born on January 6, 2002, making his age 20 years now. On the other hand, Hill also appears to be in the same range as her partner. Moreover, the duo lives a happy life in Florida.