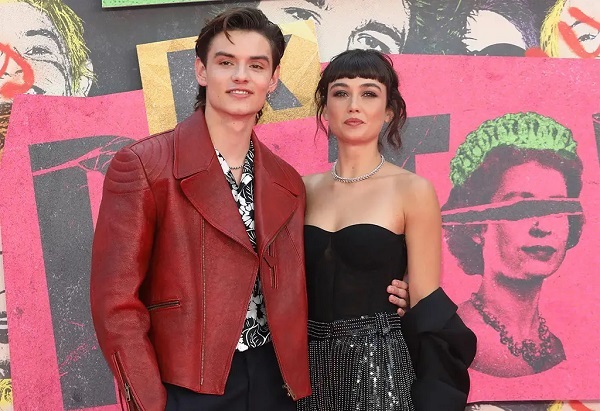 Sydney Chandler is a rising actress and model hailing from the United States of America who is recognized for her work in the movies such as Don't Worry Darling, Chemistry, Pistol, and Coercion. The actress came onto the big screen in 2016 after debuting by playing the role of Jade in The Golden Rut.

Furthermore, Chandler comes from a family background of those who are engaged in the showbiz industry. Her father, Kyle Chandler, is an award-winning actor who is noted for his work in Quiet Victory, Argo, Zero Dark Thirty, and Manchester By The Sea.

In the same way, Chandler's mom, Kathryn Chandler, is also a talented actress. So, it is believed that Sydney got interested in pursuing a career as an actress after being inspired by her parents. Meanwhile, Chandler often makes headlines on the internet regarding her dating life as she is in a relationship with her boyfriend, Louis Partridge.

As we know, Sydney Chandler is currently dating her beloved boyfriend, Louis Partridge. It is reported that Chandler and Partridge met each other on the set of Sex Pistols. After knowing each other and working together, the pair developed a good bond.

Shortly, Chandler and Partridge began appearing in various public places together. Back in December 2021, Partridge shared multiple Instagram posts from his and Chandler's trip to Paris. After that, they also made their appearance at the Venice Film Festival together.

So, it is now confirmed that Chandler and Partridge are dating each other, and they are sharing the relationship of a girlfriend and boyfriend. However, some people criticize them for their age gap.

As we know, Sydney Chandler and Louis Partridge share seven years of an age gap. Currently, Chandler is 26 years while Partridge is 19 years. So, there are some people who criticize the couple for their age gap.

Back in May 2022, a clip of Chandler and her boyfriend Partridge went viral on the internet, where we can see the actress kissing Partridge. Many people are unhappy with their age gap and have made multiple comments about the pair.

Chandler and her boyfriend are getting backlashes mainly on Reddit, where people are making multiple speculations about the relationship between Chandler and Partridge. A Reddit user said,

ok, so ew. that's nasty. I've noticed a lot of women are doing this now, going after much younger men who are NOT in their age range. it's textbook grooming. BUT, why does this blind read like it was sent in by a jealous fan or something?

In this way, we can find numerous opinions about people on the relationship between Chandler and Partridge. However, the pair has not commented anything about this matter as their dating life is still going well.

sydney chandler still has her comments limited because of people calling her out for grooming louis partridge and she’s still walking around with her career untouched. she’s going to the deepest pits of HELL — ðŸ•· (@yerenePAK) September 6, 2022

From this, it also becomes clear that they are deeply in love with each other. As said earlier, Chandler once appeared with her boyfriend at the Venice Film Festival. So, let's learn something about it.

You May Like: Who Is Morgan Taylor Campbell? More on Her Family, Net Worth & Relationship

Sydney Chandler and Her Boyfriend Appearance at Venice Film Festival

On September 5, 2022, Sydney Chandler appeared together with her boyfriend, Louis Partridge, in Venice, Italy, to promote Don't Worry Darling. The pair appeared on the red carpet.

Also, Chandler and Partridge shared images from the event on their Instagram Stories. Partridge congratulated his girlfriend and wished her the best for the future.

Not to mention, Chandler plays the role of Violet in Don't Worry Darling. Her role is one of the housewives living in Victory, California, alongside Florence Pugh's Alice and Harry Styles' Jack. Also, Violet is married to Bill (played by Douglas Smith) in the movie.