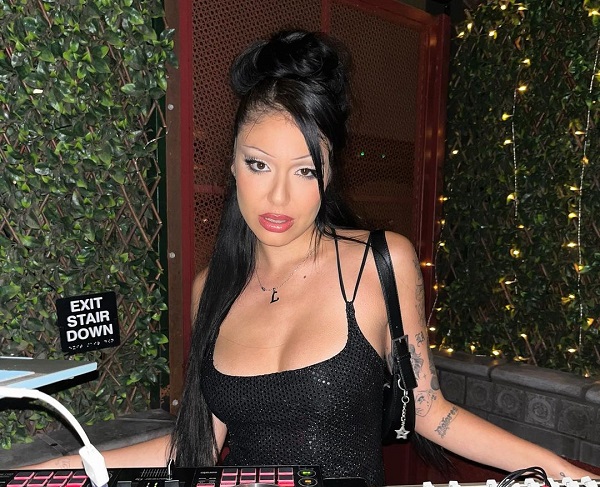 Bella Ferrada is a well-known DJ hailing from Los Angeles who is currently making headlines on the internet. She is the resident DJ of vans. DJ Ferrada has gained more than 89k followers on her Instagram handle.

The well-known DJ shares her Instagram story on a regular basis, where she also features several of her life events. As we know, Ferrada is in the limelight after getting linked with Sydney Sweeney, an American actress.

Racist accusations have been slapped against the actress as DJ Ferrada came forward claiming that the actress is discriminating against Mexicans.

DJ Ferrada shared an Instagram story, accusing Sweeney of being racist towards the former's boyfriend.

As Ferrada commented on the actress' mother's 60th birthday party, which netizens thought to be pro-MAGA themed, Ferrada alleged that the actress had also been racist towards her boyfriend. So, the news has currently become the talk of the town.

As said earlier, DJ Ferrada shared an Instagram story where we can see a photo posted by Sydney Sweeney on her Instagram.

She uploaded a carousel of images of her mother's surprise hoedown. At the party, guests appeared to be wearing parodical MAGA hats that said, "Make Sixty Great Again."

DJ Bella Ferrada accuses Sydney Sweeney of being racist to her boyfriend:

“My Mexican boyfriend was trying to fix lighting by you at the HCA awards and you freaked out and had your bf come shooo him while he was just doing his job” pic.twitter.com/fSuA36T4xu — Pop Crave (@PopCrave) August 30, 2022

At least one visitor was also seen in a Blue Lives Matter shirt, a movement that supports cops while flouting police brutality against the Black community.

So, DJ accused Sweeney of being racist towards her boyfriend at the HCA Awards. The comment made by DJ says,

All I see are red hats and red flags, girl bye; this explained why you got so scared when my Mexican boyfriend was trying to fix lighting by you at the HCA awards, and you freaked out and had you bf come shooo him while he was just doing his job and has no idea who you even are… why were you so scared ? It's giving karennnn

But this does stop there as DJ also exposed her brother Trent, who had blocked her.

DJ Ferrada slammed Trent for wearing a MAGA cap while Trent explained that he was wearing a "Make Sixty Great Again" cap as people were waiting for the response of the actress who got accused by the DJ.

Now, this is how the controversy aroused.

Also read: Reason Behind Josh Gates’ Illness: Why Was He Hospitalized?

Has Sydney Sweeney Replied to the Racist Accusations?

As we know, Sydney Sweeney has been getting collided by fans since posting pictures and clips from her mother's 60th birthday party on Instagram over the weekend.

The controversy was triggered furthermore after Ferrada left her comment on it.

Following viral speculations about the guest's dress, the actress released a statement, urging her fans to stop making assumptions, as the innocent celebration had no political plan.

Apart from that, DJ Ferrada talked about it, and the whole controversy is being viral on the internet.

Apart from that, DJ has also been called out by fans who have screenshots of a post using 'The N-word. It was her old tweets, and people on social media are going through her old posts, and it is also getting huge attention lately.

As mentioned above, DJ called out after accusing Sydney of being racist, but Sweeney had not responded to racism allegations at the time of this post.

On the other side, many people are unknown DJ Ferrada. So, we've talked about her professional life below.

Also, See: Is Manny Jacinto Married to His Fiance Dianne Doan? Find Out About His Wife & Love Life

Who Is DJ Bella Ferrada?

Bella Ferrada is a talented DJ based in Los Angeles, and she is a resident DJ of Vans. DJ Ferrada has a solid fan base on her Instagram handle and has collected more than 89k followers.

From her account, Ferrada shares updates regarding her ongoing lifestyle and also features her images performing in numerous events. Likewise, DJ Ferrada is pretty active on Instagram and loves featuring her life as she explores different locations.

Furthermore, her Instagram bio also shows that she loves to watch a lot of scary movies. So, we can follow DJ Ferrada on Instagram to get every information about her lifestyle.