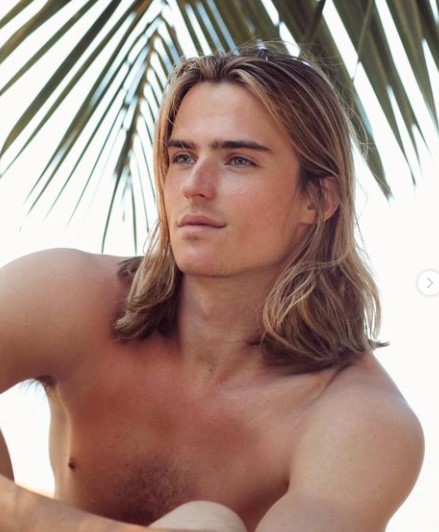 Luke Eisner is a popular social media influencer, actor, model, musician, singer, and entrepreneur. Besides being a multi-talented person, Luke was also blessed with gorgeous looks. The stunner has done photoshoots for different brands. Luke's shoulder-length blonde and gorgeous hair is his signature look!

Born on August 1, 1996, in Wisconsin, USA, Luke Eisner's age is 25 years as of 2022. He will be turning 26 this coming August 1. The handsome hunk stands tall at 6 feet and 3 inches. His zodiac sign is a Leo. Luke spent his childhood growing up in Wisconsin with his parents.

Our efforts to find out about Luke's sibling's information were of no avail. Luke holds American citizenship and his ethnicity is white. The actor attended Greendale High School. Ever since he was a child, Luke was interested in acting and modeling.

Luke started as a wedding DJ but later shifted his career to modeling. He has modeled for many reputed names like Stuart Weizman, H&M, Ralph Lauren, American Eagle, Calvin Klein, Polo, among others.

Luke Eisner portrays the role of Stig, a school student who is nearly ten years younger than him in the film Tall Girl released by Netflix on September 13, 2019. Tall Girl is an American teen romantic comedy film produced by Nzingha Stewart with a screenplay by Sam Wolfson.

Luke's character Stig is a Swedish exchange student who arrives in town and catches the attention of Jodi. Immediately after, Jodi becomes obsessed with him. When Jodi learns that Stig is staying at her best friend Jack Dunkleman’s house, things get complicated. The rom-com has unexpected turns and Luke's performance as Stig creates a lasting impression on the viewers.

Luke has reprised his former role of Stig in Tall Girl 2 which was released on February 11, 2022.

The Tall Girl actor Luke Eisner is in a loving relationship with his beautiful girlfriend Kirby Johnson. Luke's girlfriend Kirby is an actress herself. She has appeared in movies like 5150 and The Possession of Hannah Grace.  In 2013,  Kirby starred in the show called “Hollywood Coach”. Besides, like her boyfriend Luke, Kirby is also a social media influence. She has over 171K followers on her Instagram page and 588K followers on her Tiktok page.

Even though the pair are constantly posting about one another on their social media, they haven't yet revealed to their fans and well-wishers when and how they encountered each other. However, it's been confirmed that the duo began to date in 2018. They also have a YouTube channel named Kirby and Luke Diaries.

My life is a dream and your smile is the anesthesia keeping me in it. Of all the things I’ve been fortunate enough to do in my life being your boyfriend (and Instagram photographer) takes the cake.

Also, read Who Is CNN Maribel Aber? Explore Her CNN Profile and Husband

If these romantic love birds aren't couple goals, then who is?

Luke Eisner's net worth is estimated to be around $600000. The model has earned his net worth thanks to his successful career in modeling as well as acting.

For more information on celebrity lifestyle and relationships, make sure to follow us at CelebrityShine.