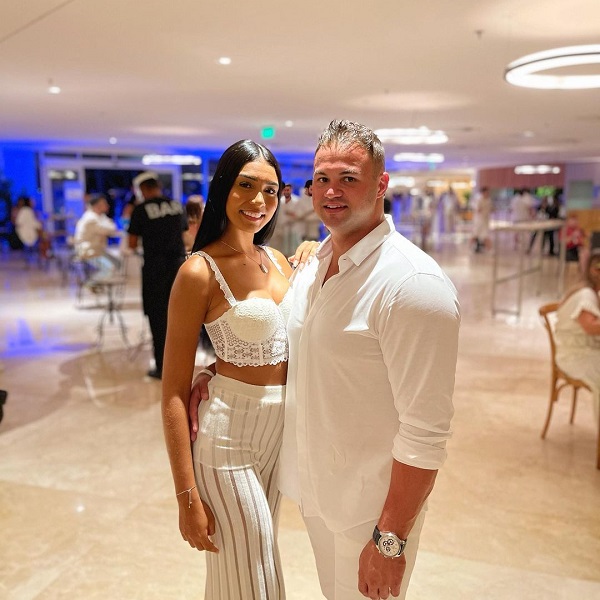 Thaís Ramone and Patrick Mendes are the power couple who shot to fame after they appeared together in 90 Day Fiancé. The 31-years-old Mendes is an American-Brazilian weightlifter who started Olympic weightlifting back in 2008.

On the other side, Ramone is from Montes Claros, Brazil. She is an Instagram model who previously studied nutrition in college before moving to the US. She has gained over 92.9k followers at the time of this post. Moreover, both Mendes and Ramone got into the spotlight after coming to the show.

Not only that, but their love story has also left everyone amazed as the pair met interestingly.

So, in today's writing, we will talk about their love life and more. Besides that, they are also in the limelight after announcing their baby's expectations.

How Did Thaís Ramone and Patrick Mendes Met?

As said earlier, Thais Ramone and Patrick Mendes met each other in an interesting way. As we know, Ramone is originally from Brazil, and Mendes is also a Brazilian from his father's side.

So, when Mendes traveled to Brazil to visit family, he met Ramone. While on the trip, Mendes consulted a dating app, trying to find someone to help him learn the Portuguese language.

So, during that time, he met his current wife. Shortly, they met in real life and later developed feelings for each other. After that, Mendes used to travel from the US to Brazil to keep his love life good. So, their relationship was going pretty well.

After being in a romantic relationship for some time, Mendes thought of taking it to the next level. Mendes reportedly traveled from the US to Brazil multiple times, and during one of those trips, he proposed to Ramone.

When they went on a vacation to Mexico, Mendes kneeled down and proposed to Ramone with an engagement ring.

They had also shared some snaps on their social media handles that went viral on the internet as the location was unique.

So, we can also find some of the images on their Instagram account. After that, some people were unknown of their marriage, and they began asking if the duo was still together or not.

According to In touch weekly, Ramone and Mendes walked down the wedding aisle on February 22, 2022. Since then, the pair have been cherishing a blissful life in the United States.

Moreover, they have shared multiple moments of them being cozy, and their recent Instagram post has added power to the fire as the pair announced they are expecting their first child. So, let's talk about it below.

Learn More: Is 90 Day Fiancé's Patrick Mendes Still Together With Partner Thais? Find Out His Relationship

Is Thaís Ramone Pregnant? Details on Her First Baby

Yes, Thaís Ramone is pregnant, and she is expecting her first child. The power couple, Thaís Ramone and Patrick Mendes took on Instagram to announce the happy news. They shared multiple images, including with their dog. The post reads,

After that, their fans and followers congratulated them for becoming parents soon. So, it can be said that they will soon give birth to their baby. Apart from that, fans are eager to know if it is a boy or a girl. However, the couple has not given further information about their pregnancy.

But we can expect that they will give more updates in the future. So, we can follow them on Instagram to get more updates. Ramone is registered as @thaisramoniee, while her husband is available under the username @buffmendes. From these accounts, the pair shares their day-to-day lifestyle.