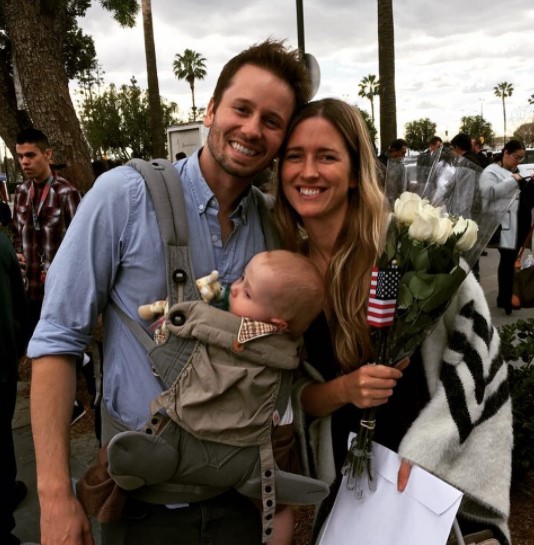 Tyler Ritter is a well-known American actor and TV personality. Tyler is much renowned for his role as Ronny McCarthy in the American sitcom television series created by Brian Gallivan, The McCarthys. Tyler also gained fame for his acting in the Agents of S.H.I.E.L.D in 2013 and  NCIS in 2003.

Currently, Ritter is married to his wife Lelia Parma. The couple also has a child together.

The actor was born Tyler David Thomas Ritter on January 31, 1985, in Los  Angeles, California, USA. As of 2022, Tyler Ritter's age is 37 years. His height is 1.85m(6 feet 1 inch). Tyler hails from a family of artists and musicians. Tyler was born to his father, actor John Ritter, and mother Nancy Morgan.

He also has a brother, Jason Ritter, who is an  American actor and producer. Tyler's brother Jason is recognized for his role in the television series Joan of Arcadia, The Class,  The Event, Dipper Pines in Gravity Falls, etc to name a few.

What a brother, role model, and friend you’ve been...I must’ve done something as noble as all hell in my past life to have deserved as much! Love you, thank you, And Happy Birthday @jason_ritter ðŸ¦‹ pic.twitter.com/maDKAZqr89 — Tyler Ritter (@TylerRitter) February 17, 2018

Besides, Tyler is the grandson of the pioneer of country music, the celebrated Woodward Maurice "Tex" Ritter. From the mid-1930s to the 1960s, Tex was a popular singer/actor. Tyler's grandfather is also a member of the Country Music Hall of Fame.

In spite of taking part in high school plays and student films, Ritter initially had resolved not to pursue a career acting after the sudden death of his father. After his graduation in 2007 from the University of Pennsylvania, he became a teacher in Argentina and worked there for 3 years. Ultimately, at the age of 25, he decided to come back to Los Angeles to become an actor.

Tyler Ritter initially featured on Modern Family and Grey's Anatomy as guest roles. Eventually, in 2014, he earned his first starring role on The McCarthy, where he played the role of an openly gay son, Ronny McCarthy, in a family of six. The McCarthy is an American working-class and sports-themed comedy television that debuted on CBS.

Is Tyler Ritter Gay? Know About His Partner

No, Tyler Ritter isn't gay in real life. He is happily married to Lelia Parma. But in the TV sitcom The McCarthy, we can see Tyler take on the role of a gay son and a guidance counselor. About his role, Tyler told The Wrap that the show started out with Ronny already having come out of the closet and the McCarthy family is completely OK and accepting of his sexuality.

You may also want to read: What Is Bikini Model Lyna Perez's Wiki? Explore Her Age, Height, Boyfriend, And Net Worth

Marriage To Leila Parma And Their First Child

Tyler Ritter has been married to his wife Lelia Parma for 12 years now! He met Leila while working as a Teacher in Argentina. The two instantly hit it off and got married after a couple of months of dating.

Lelia is an Argentinian film director by profession. Additionally, after marrying Tyler, she also became part of The John Ritter Foundation of The Aortic Health which is run by the Ritter family. It has been revealed that Tyler's wife was the one to encourage him to be an actor as she could feel his passion for film and movies.

The actor is on Instagram where he has 5K followers. Likewise, he also has a Facebook page, although he doesn't seem to be active anymore. His last post on the app is dated 2017. Tyler is also on Twitter where he has 9K followers.

For more celebrity updates, make sure to follow us at CelebrityShine.