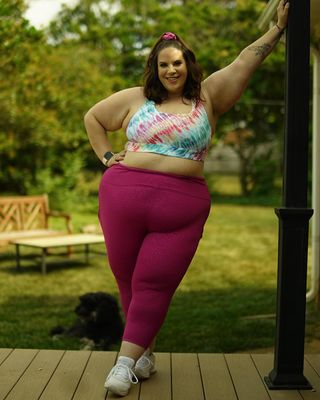 Whitney Way Thore is a known American personality who is famous for appearing on the television show My Big Fat Fabulous Life.

The star of My Big Fat Fabulous Life is often slammed by her fans who think Way should rethink her weight loss surgery idea since the operation could affect the success of her show that showcases a similar identity.

Whitney Way has been known for her body positivity which many of her fans adore the most.

But having said that, being a plus-size body and an advocate does not always come with happy benefits. Whitney Way sometimes feels unhappy about her own body. She recently decided to go under the knife after her breakup, and many of her fans want to know more information about it. Also read: Are Stranger Things Co-Stars, Finn Wolfhard and Sadie Sink Dating in Real Life? Insights on Wolfhard’s Relationship and Current Girlfriend

The TV star. Whitney Way Thore was born on April 14, 1984, in Greensboro, North Carolina. Her parents are Glenn and Barbara Thore.

She has also appeared on the TV show on the TLC channel, which surfaces the life of a woman weighing 380 pounds at the initial stage of the series.

By her famous persona, Thore was accepted into the Theatre Summer Enrichment Program at the Governor’s School of North Carolina of Meredith College in 2000. She has also enrolled herself at Appalachian State University in Boone, North Carolina.

What Are Whitney Way’s Height and Weight Measurements?

While she was on the reality TV show, My Big Fat Fabulous Life, she weighs around 380 pounds. She has furthermore lost about 30 kg weight after the show was over.

Her dance video went viral in 2014, which was named A Fat Girl Dancing, which had a greater positive impact as it promoted body acceptance and body positivity. It told many young people to accept their own bodies of whatever size. This also led to her feature on numerous media like ABC News, NBC’s Today Show, and The Huffington Post.

Later, in the year 2015, she was aired on TLC’S show, My Big Fat Fabulous Life, which supported her life and goal to lose weight. The first season had 10 episodes, and it was one of the most successful shows.

Whitney Way Thore wanted to feel confident in losing some of her body weight, so she lost around 70 pounds to prepare herself for Bariatric surgery.

Unfortunately, the TLC star had a traumatic end to her engagement, she struggled a lot both mentally and physically and considered a weight loss surgery to gain better health for the first time in her life. At the same time, she was also seeking mental relief from ailments as she suffered from depression due to the engagement breakdown.

She lost prior 70 pounds to make herself ready for the surgery as it is a common procedure for bariatric patients to go through some weight reduction organically prior to surgery.

According to the sources, Whitney Way Thore has not yet revealed any of her surgery plans but based on her latest weight loss news, yes! she has been preparing for the surgery.

Many people would not know their real identity and her details if Whitney Way Thore had not appeared in the TV show. But it is not solely the show through which she earns money. She will always be remembered as an inspiring and enthusiastic dancer from the video that went viral.

As of 2022, the estimated net worth of Whitney Way Thore is $1.7 million approximately. Before being a TV personality, she was also a dance instructor and used to dance to spread a wonderful message of body acceptance and positivity.