Ashleigh Barty is an Australian professional tennis player who has achieved a milestone since her debut in tennis. She has won several championships and tournaments, including the recent 2021 Wimbledon Championships.

And on winning the Wimbledon Championship, many of her well-wishers congratulated her by posting sweet messages on their respective social platforms, including Twitter and Instagram. Even Romanian tennis player Simona Halep took her official Twitter to congratulate Ashleigh by writing,

Could not be happier for you @ashbarty - huge congratulations on your @Wimbledon title and enjoy every second.

Likewise, Ashleigh also said that "Dreams do come true" by posting a picture on her Instagram. In addition, Barty shared her thoughts on her Wimbledon victory in one of the interviews. Her exact words were,

"It took me a long time to verbalize the fact that I wanted to dare to dream and say that I wanted to win this incredible tournament."Being able to live out my dream here with everyone here, it's better than I ever could have imagined."I didn't sleep a lot last night and I was thinking of all of the 'what ifs' but coming out on this court, I felt at home in a way."Being able to share all of that with everyone here and with all of my team, that's incredible."

Similarly, Ashleigh is the ranked No.1 by the Women's Tennis Association in the single rankings. Plus, she has a record of winning 12 singles and 11 doubles as of this writing. So now, let's move into the article to know her achievement and personal life in detail.

Some Quick Facts About Ashleigh Barty

Ashleigh began playing tennis professionally in 2010. In other words, she debuted by participating in an International Tennis Federation in Ipswich.

After two years, in 2012, Ash had her first main draw in singles and doubles at the WTA Tour. In the same year, she made her single historical record with the 34-4 in the nine tournaments at ITF Women's Circuit. Also, Barty had her doubles record in the Circuit.

Then, in 2013, Ashleigh competed at the WTA Tour, where she made other doubles record. Also, she and her partner, Casey Dellacqua same second in three Grand Slam events. That event also includes the Australian Open. Plus, they became the first Australian team to reach the finals in 2004's Australian Open.

After this, at the end of 2014, Ashleigh took a break from tennis for an indefinite time.

Nearly after two years, in 2016, Barty made her comeback in the field. And in 2017, she got her first win at American Open. Since then, she had won many championships, including French Open, WTA Finals, Italian Open, Canadian Open, and more. In addition, ash has won two Grand Slams, eleven singles, and twelve doubles as of mid-2021.

Also, she has added another victory: the 2021 Wimbledon Championships on 10th July 2021.

Besides trophies and titles, she is also the world No.1 in the Women's Tennis Associations in the singles ranking.

How Much is Ashleigh Barty Net Worth? Career Earnings, Winning Prize And More

Ashleigh has acquired about $16 million of net worth from her profession, per the Celebrity Net Worth.

In addition, Ash earns millions of dollars from her victory. Like, she received $4.2 million as a winning prize at the WTA Finals in 2019.

You May Like - The 2020 Olympic All-Round Champion, Sunisa Lee's Biography - Sneak Peak On Her Height And Age

Who Is Ashleigh Barty Dating? Her Boyfriend And Romantic Life

The 2021 Wimbledon Champion, Ash is dating her golfer boyfriend, Garry Kissick, for many years. The pair met each other at the Brookwater Golf Club in 2016.

Then, they began dating the following year. Eventually, the tennis player and her sweetheart made their love public in the same year.

Likewise, Ashleigh's boyfriend is very supportive, and he never fails to show his support. Like, Garry even makes his presence to support Ash in her matches and even at her practice session. 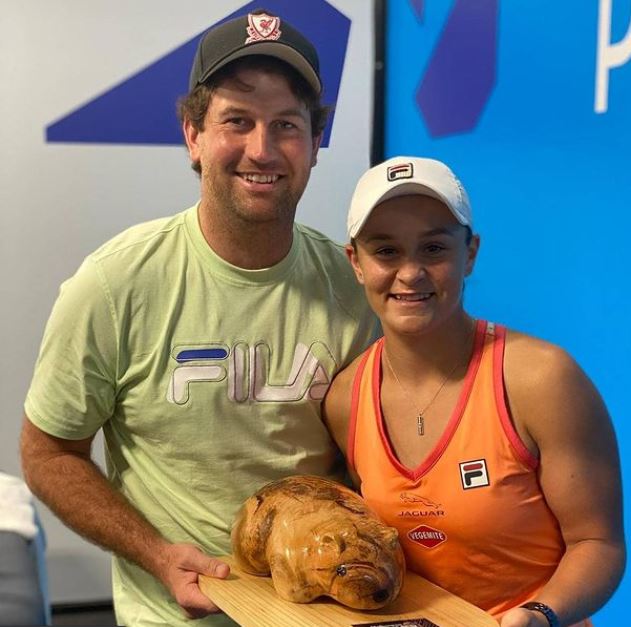 Many of her fellow mates say that Ashleigh and Garry are the most normal couple in their respective fields.

Similarly, if everything goes as plan, we might get to see Ash walking down the aisle to take wedding vows with her handsome boyfriend, Garry, soon.

Detail On Ashleigh Barty Boyfriend, Garry Kissick - His Profession, Net Worth And Age

Ash's beau, Garry Kissick, is an Australian professional golfer. As per several sources, he works at the Country Club and Brookwater Golfer in Brisbane, Australia.

Similarly, Garry might have made a net worth in a million figures. But, the accurate detail on his total worth is under review.

Ashleigh was born on 24th April 1996 in Ipswich, Queensland, Australia. She is 25 years old as of writing this article. And she secures Taurus as her birth sign.

Ash is a daughter to her father, Robert Barty, and mother, Josie Barty. Her parents have been the constant support system throughout her journey. Robert is a government worker, whereas Josie is a radiographer.

Which School Did Ashleigh Barty Go To? Info On Her Educational Background

Ashleigh's high school name is out of reach. But, it is for sure that she attended one of the schools in her hometown.

Read Next - Who Is David Crane? Personal Life Of The Co-creator Of 'FRIENDS'

The professional golfer is 5 feet and 5 inches (1.6 meters) tall. And she has blue eyes and dark brown hair.

Ash was born in Australia, so her nationality is Australian.