Who Is Zoe Margaret Colletti Boyfriend Nichlmao? Facts About Their Relationship Timeline and More! 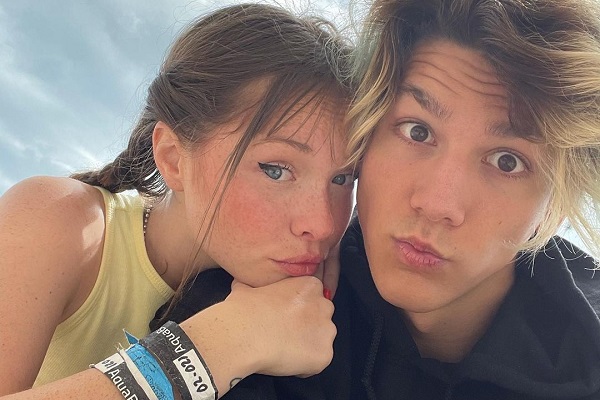 Zoe Margaret Colletti is a prominent actress from the U.S. who gained widespread recognition after appearing in the movies such as Scary Stories to Tell in the Dark, Annie, The Lego Ninjago Movie, and Wildlife.

Furthermore, Colletti is not just famous for her professional work. Fans often recognize her as the girlfriend of famous YouTube star Nichlmao. Here's what we know about her boyfriend and their relationship timeline.

Zoe Margaret Colletti is in a romantic relationship with her loving boyfriend, Nichlmao. He is a famous YouTuber who created a YouTube channel under his name on September 26, 2018. Since uploading videos on the channel, Nichlmao has now come a long way and has collected more than 19.9 million subscribers.

Nichlmao was born Nicholai Perrett on September 29, 2001, making him age 21. Nichlmao also has a strong presence on other social media platforms like TikTok and Instagram. Furthermore, Nichlmao got more into people's eyes when he began dating actress Zoe Margaret Colletti. Let's explore their relationship timeline.

Zoe Margaret Colletti and Nichlmao began dating each other in October 2019. Initially, the lovebirds kept their love life secret but later began sharing snaps on social media. Their Instagram posts are filled with cute pictures as they frequently post.

The couple marked their second anniversary on October 29 by sharing some of their images on Instagram. Colletti's boyfriend, Nichlmao, took to Instagram to share the news with the world. He shared a series of photos with his girlfriend saying, "I'm gonna marry this girl @zoecolletti Happy 2 years (swipe to the end, hehe)."

In the same way, the actress also took to Instagram to wish her boyfriend their two years anniversary. She also shared some moments, saying, "Happy 2 years with my favorite boy in the entire world! There's no one on this earth I'd rather be with. You make my world a better place, and sometimes, I can't believe how fast these two years have felt. Loving you is the best decision I've ever made."

As there are no rumors of any separation, it can be said that Colletti and Nichlmao are still together. However, Nichlmao made a video about breaking up in December 2021. But it turned out that it was just a prank. The prank video title was "MY GIRLFRIEND & I ARE BREAKING UP?! (4 Mil QnA SPECIAL)." In the video, he also mentioned if the video gets a million likes, they will get married. At the time of this post, it has just gained over 225k likes.

Zoe Margaret Colletti and Nichlmao Once Did Pregnancy Prank

As we know, Nichlmao is a YouTuber, and some of his videos also feature his girlfriend, Zoe. Back on April 18, 2022, Nichlmao uploaded a video on YouTube titled "My Girlfriend Is PREGNANT... (IMPORTANT)."

The 8 minutes long video has already gained 11 million views. In the video, we can see Nichlmao helping his girlfriend as she is pregnant. The main part of the video is to share the pregnancy news of their roommates. All of his roommates were shocked and happy to hear the pregnant news.

However, it was just a prank. The video description also reads, "Fake pregnancy prank with my girlfriend on my roommate!" As of now, both of them are busy with their career and working schedules. Apart from that, Zoe previously had another man in her life.

Also See: Who Is Kiera Bridget Dating? She Is in a Relationship With Her Boyfriend, Caylus

Who Is Zoe Margaret Colletti's Ex-Boyfriend? Past Relationship

Zoe Margaret Colletti was previously in a relationship with Ed Oxenbould. Ed is an Australian actor who is famous for his role in the film Julian (2012).

Some online report shows that Colletti and Ed began dating each other in 2016. Like many couples, both of them didn't talk much about their love life in the press. After years of dating, Zoe and Ed split. There is no reason behind their separation.