If you haven’t heard about Lisseth Chavez, then why not tune into her world-famous TV series Chicago P.D. You will be astonished to see her acting as Vanessa Rojas in the Chicago P.D. Well, I don’t think you should blame me for making you binge-watch the series.

Moreover, the talented actress has hidden her private life behind the curtains so far. Aren’t you curious to have a close-up about her off-screen life?

Without wasting any time further, I will let you know everything about her, including boyfriend, net worth, and age, in the article below.

Is Lisseth Chavez Married? Everything On her Boyfriend and Husband

The Fosters’s actress is very dedicated to her acting career and is already famous. On top of that, she is elegant, which can attract any best-looking guy. So, would you be surprised if I tell you that she has not been in controversy regarding love-life that often? 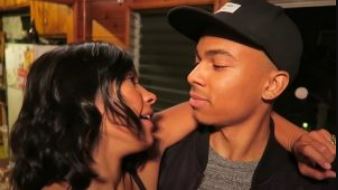 Lisseth Chavez with her ex-boyfriend, Sean McClam, in 2016. (Source: Starsoffline)

Yes, Lisseth has kept her dating life out of the media as she is highly protective about such pieces of stuff. However, in 2016, the actress was linked with the storyteller-actor named Sean McClam. As per the sources, they made their feelings public in April 2016.

Lisseth Made Her Relationship Public Via Social Media:

Though much gossips started circulating over the online and media, Lisseth kept her mouth shut for several months. However, Chavez and Sean couldn’t hide their love for a more extended period from the public. In April 2016, McClam said that he is beginning to use the Twitter account for sharing his poetry and writing in one of his tweets. In response to the tweet, Lisseth replied by saying,

In addition, Lisseth and Sean poured love openly by tweeting and replying to the particular tweet many times. For instance, on 1st June 2016, Sean said that he loves her by making a tweet. And in return, Chavez expressed her feeling as well. The original tweet goes by,

Further, on 9th June 2016, the actress posted on her Twitter by saying,

Reading scripts while my boyfriend edits next to me...Feels great. Ok, back to work:),

In the same way, the pair showed their emotions for the time being. Also, Sean was seen in one of Lisseth’s vlogs on 29th September 2016.

Unfortunately, the couple has stopped posting on their respective social media handles for a long time. Most probably, Sean and Lisseth have already walked different paths. So, as of now, the Chicago P.D.’s star is unmarried and single.

Chavez earns a good income from her profession as an actress. She has featured in numerous TV shows, including The Fosters, The OA, The Night Shift, Shameless and more.

The Starsoffline reports that Lisseth has a net worth of $750 thousand. In upcoming years, she will accumulate millions of dollars as she has many films and shows on the schedule.

Similarly, Lisseth has distinctive body features, which include her fuller lips and thick eyebrows. Also, she has a dimple on her cheeks that makes her look more elegant.

Lisseth was born in 1989. As she lights a candle every 25th of May, she is 31 years old writing the article. The actress holds a Gemini as her birth sign.

Speaking about Chavez’s parents, it has been identified that her father is Julio Chavez, and her mother is Clara Chavez. Other than this, not much is known about the actress’s family.

However, by looking at Lisseth’s social media account, we know that she is very close to her father and mother.

Besides, Chavez shares half of her childhood with her only younger brother named Cesar. And her little brother is not small anymore as Cesar has already completed his undergraduate studies.

What is Lisseth Chavez Ethnicity And Nationality?

As Lisseth has portrayed Ximena, a Mexican lesbian in The Fosters, her ethnicity is often confused. So to make you clear, she is not a Mexican; but belongs to Salvadoran ethnic groups.

Regarding nationality, Lisseth is American.