Did Chris Harrison and Lauren Zima Secretly Get Married? Know the Full Story! 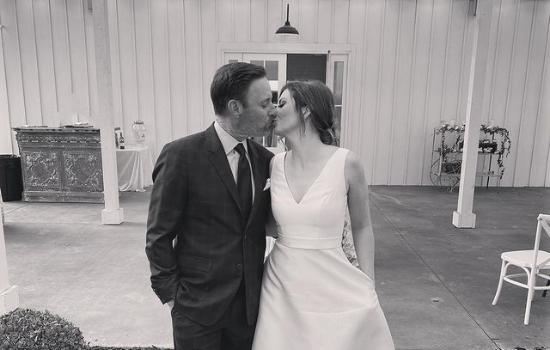 All of us love secret weddings. And why would anyone not love it? The Bachelor host Chris Harrison did the same when he posted a picture of him accompanied by his girlfriend, Lauren Zima, which appears to be from his wedding.

Harrison has been in a romantic relationship with the Entertainment Tonight correspondent for a long time now. The love birds usually feature each other in their social media handles too. As a result of their strong bond, fans were expecting a grand wedding ceremony from the TV celebrities.

However, when Harrison shared a wedding picture alongside Zima, who was wearing a wedding gown, many thought they secretly shared the wedding vows. So, did they got married for real? Well, keep reading to know!

Harrison and Zima Are Yet To Get Married

The long-time couple sparked speculations of secret marriage on April 27, 2021, when Harrison shared a black and white picture of him and his girlfriend kissing through his Instagram handle. In the picture, Harrison donned a formal suit, whereas Zima was wearing a white wedding gown.

The adorable picture was accompanied by a romantic caption quoted from Modern English. It read, “I’d stop the world and melt with you” @laurenzima, there’s no one I’d rather celebrate love with, and I’ll be your plus one anytime.”

After the picture got posted, many celebrities and thousands of fans were shocked as they thought Harrison and Zima married secretly. But, the 33-year-old correspondent shut down all the wedding talks when she commented on her boyfriend’s post. Zima wrote;

I love you so much and appreciate all the ‘congrats’! This *bridesmaids* dress is really living above its potential.

Just some moments later, the 49-year-old TV show host also denied the wedding talks as he replied to his girlfriend’s comment and wrote, “Wow you attend one wedding together...do one chicken dance and your hitched! Congrats Christine and Kevin on a beautiful wedding and the start of a wonderful life together. I do love this bridesmaid though.” Going by Harrison and Zima’s comment, it is now confirmed that the two did not get secretly married, and they were attending their friend’s wedding ceremony. But, looking at their relationship, it seems that the day is not that far away when they themselves tie the wedding knots.

Chris and Lauren Are Not Even Engaged

In the midst of the wedding talks, many people forgot that the two television personalities are not even engaged. Yes! You heard that right. Harrison and Zima are yet to share the rings and get engaged.

Although they yet to be engaged, the couple has a very romantic and harmonious relationship. The two first met each other in 2018 through their professional works. Soon, they became friends and eventually began dating in the summer of 2018.

Since then, they have been inseparable and are mostly featured on each other’s Instagram handle. While talking about Zima, Harrison told People that she is as much a grinder as he is, and he loves, respects, and admires her for that. In addition to that, he also stated that she is kind, easily blends with his friends, and makes him happy.

As time passed, the duo’s relationship became better and better. During the COVID-19 pandemic, too, they always supported and motivated each other to reach out and help each other.

You May Also Like: Former 'Unexpected' Star Mckayla Adkins Gets Engaged after One-year Dating Anniversary

Some Quick Facts About Chris Harrison