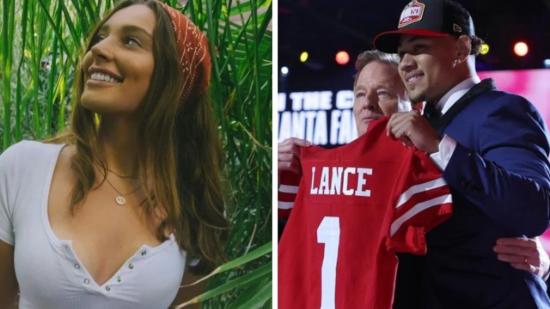 The 20-year-old American footballer Trey Lance surprised all during the first round of the 2021 NFL Draft. And why wouldn’t he, as the number 10 NFL prospect, was drafted by the San Francisco 49ers as their first pick and third overall pick of the draft.

Since then, the 6 feet 4 inches (1.93 meters) tall quarterback has been garnering the limelight in a whole new level. However, being the third pick in the draft isn’t the only thing for which he is buzzing on the internet.

The Minnesota native has also been grabbing attention for possibly dating Liv Cowherd, the daughter of Colin Cowherd. But, when did the whole dating speculation initiated? And for how long has this been going? Well, keep reading to know the whole story!

When Did Dating Rumors Start?

The gossips of Trey Lance possibly dating Colin Cowherd’s daughter, Liv, began back in late March 2021 after the podcast host mentioned that the quarterback was in his house.

While talking about the 2021 NFL Draft on his podcast, Colin stated that Lance is special. Then, he dropped a bomb as he told that Lance was at his residence less than 24 hours ago. Afterward, he praised the footballer as he said that Lance is very humble and gracious, and he has got all the right things in life that he deeply cares about.

I think he’s special. By the way, I’m not going to lie, he was at my house 24 hours ago. Very humble, very gracious, he’s got all the right things in life that he cares about.

Following that huge statement, the host never told anyone what the future NFL star was doing in his residence. However, people quickly wondered if Lance’s presence in Colin’s house had anything to do with the host’s daughter, Liv Cowherd.

Soon, the internet began gossiping about a possible romantic relationship between Trey Lance and Liv Cowherd. In no time, peoples also discovered that the possible couple is following each other on Instagram, and Lance has even liked and commented on some of Liv’s posts. 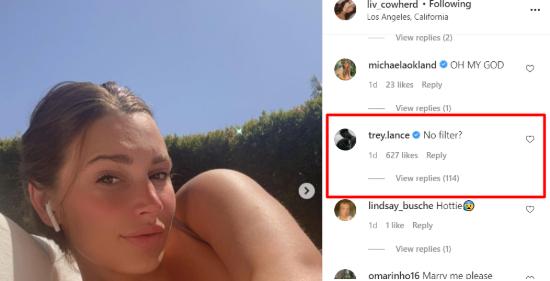 The Speculations Got Fueled after Lance’s NFL Draft

Lance and Liv’s dating rumors were already hyped, and it further got fueled when the North Dakota State college player was drafted as the third overall pick by the San Francisco 49ers in the 2021 NFL Draft.

After Lance got drafted, Colin once again praised the quarterback through a Twitter post, as he mentioned that Lance is the right pick and is a stronger and bigger athlete than Mac Jones. Continuing his statement, he told;

“I know Trey, I like him, I think he’s a really good kid. This is 6-foot-4, 220 [pounds], big arm, can run — he has as many starts as Mac Jones, but unlike Mac, he didn’t have the protection, didn’t have the many receivers that were wide open. Every scout I know, every executive I know loves this kid. This is the right move. I’m sorry, but I can’t go low ceiling with Mac Jones, can’t do it. Ha, it’s great. Yeah, baby, kid earned it, couldn’t be happier.”

Although Liv didn’t comment on her father’s tweet, she did retweet it. In addition to that, she also shared Lance’s Instagram post (Lance had posted a picture of him holding a San Francisco 49ers’ jersey after getting drafted) through her Instagram story. 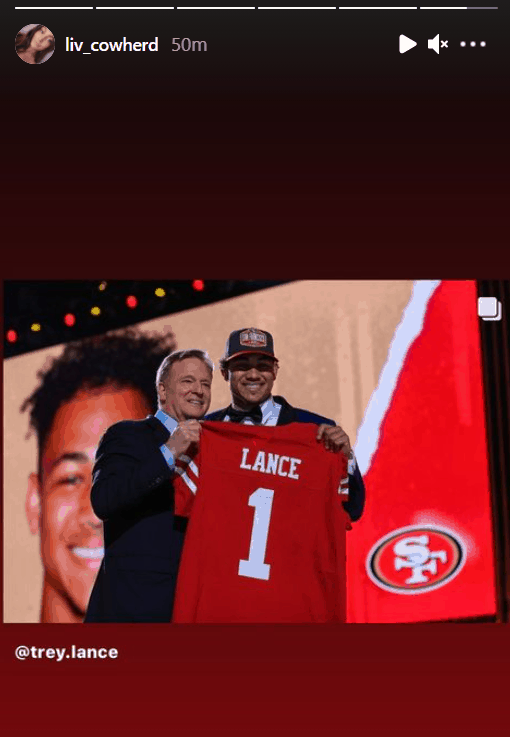 You May Also Like: NFL Draft 2021: The Lucky Young Players That Got Drafted As The First Ten Picks

As a result of that, the gossips of Trey Lance dating Liv Cowherd became stronger. Noting that, are the speculations true? And are they dating for real? Sadly, nothing can be said, with full confidence, as the rumored duo is yet to comment. Till then, there is nothing else to do but wait for an official statement.