NFL Draft 2021: The Lucky Young Players That Got Drafted As The First Ten Picks 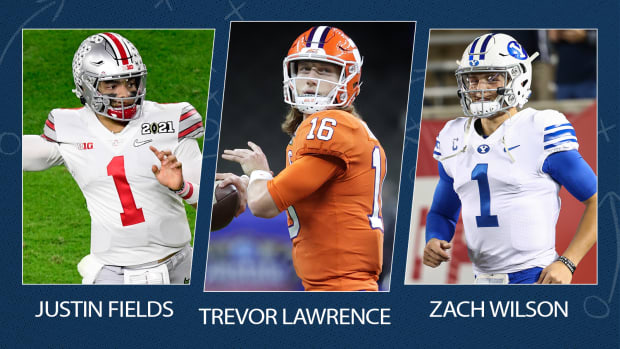 The NFL Draft is one of the most significant events for young American football players who hope to get picked in the National Football League (NFL). If they are selected, then those players are probably the happiest ones.

The players and fans of the NFL teams also get excited to learn which college player is selected by their favorite teams and if he can win games for the team. Last year, the 2020 NFL Draft was quite affected as it was virtual due to the COVID-19 pandemic.

Nonetheless, the hype of the NFL Draft didn’t fade away. As of now, too, the hype is enormous as the most anticipated moment in American Football has already begun, with the first round of the 2021 NFL Draft being concluded just some hours ago.

Yes! The first round in the three-day event has already ended, with some huge signings by the NFL teams. But, before learning the actual picks, let’s first have a quick look at the top 10 prospects that included 1) Trevor Lawrence, 2) Zach Wilson, 3) Justin Fields, 4) Mac Jones, 5) DeVonta Smith, 6) Jaylen Waddle, 7) Kyle Pitts, 8) Penei Sewell, 9) Ja'Marr Chase, and 10) Trey Lance.

Now that we have learned who the top 10 prospects were assumed to be drafted in the first round let’s look at the actual top 10 draft picks and see if there are any changes!

As expected by the NFL experts and thousands of fans, Trevor Lawrence became the No. 1 pick of the 2021 NFL Draft as he was picked by Jacksonville Jaguars. He is regarded as the most hyped quarterback prospect since Andrew Luck.

It seems that the guesses of the NFL experts were correct as Zach Wilson became the second overall pick of the 2021 NFL Draft. The talented quarterback was picked by New York Jets. After being drafted, he was given the Goodell hug of the ceremony and a couple of high-fives from the NYJ fans.

A dream come true, and it’s just the beginning. You haven’t seen anything yet! RT if you’re with me @nyjets fans! #NFLDraft2021 @verizon #VerizonPartner pic.twitter.com/Ltv6qiUjmu — Zachary Wilson (@zachkapono1) April 30, 2021

In Wilson’s 2020-21 season with the BYU Cougars football team, he threw 33 touchdowns, ten rushing touchdowns, and was picked off 3 times only in the 12 games he played.

Trey Lance is a quarterback who played college football for North Dakota State. In the 2020 season, he only played one game as his team’s whole season was ended due to the pandemic.

The number 7 overall NFL prospect became the fourth overall pick of the 2021 NFL Draft when he was selected by Atlanta Falcons. Atlanta Falcons broke the continuation of picking only quarterbacks when they picked Pitts, a Tight End.

With the 4th pick in the #NFLDraft, we have selected TE Kyle Pitts.

Regarded as the highly anticipated non-quarterback pick, Kyle Pitts used to play college football for Florida before being drafted. He was considered the best receiver of last season as he scored 12 touchdowns and picked up 770 yards in just eight games.

The 21-year-old Ja’Marr Chase becomes the fifth overall pick in the 2021 NFL Draft and the first player drafted by Cincinnati Bengals. Considered the most talented wide receiver from the 2021 NFL Draft, he has been earning comparisons to Dez Bryant.

The wide receiver Jaylen Waddle becomes the sixth overall and first pick for Miami Dolphins. Waddle is super fast in the field and is even regarded as the fastest receiver of the 2021 NFL Draft.

In his last season with Alabama, he averaged 19.1 yards per reception. Unfortunately, he could not benefit more in that season as his ankle broke. Nonetheless, he is fit now and eager to contribute to the team.

The seventh overall pick of the 2021 NFL Draft hails from the suburbs of Malaeimi, American Samoa. Penei Sewell becomes the first Offensive lineman to get drafted in this year’s edition of the NFL draft when he got drafted by the Detroit Lions.

His stats from 2019 and his playing position are so amazing that the ESPN analyst said he might be the best player in college football.

In his last season with the South Carolina team, Jaycee Horn was able to do two interceptions and collect 16 tackles in just seven games.

The ninth overall pick of the 2021 NFL Draft is Patrick Surtain II, the son of the 11-year NFL veteran Patrick Surtain Sr. The cornerback was drafted by the Denver-based NFL team,  Denver Broncos.

Before being drafted, he used to play college football with Alabama. In the 13 games that he played, he allowed less than 25 yards in nine of those games.

DeVonta Smith is the tenth overall pick of the 2021 NFL Draft. The Philadelphia Eagles drafted him after being traded by the Dallas Cowboys.

The 6 foot 1-inch tall wide receiver used to play college football for Alabama before being drafted. In his last season, Smith was able to win the Heisman Trophy. Other than that, he has many useful skills and tactics that he uses during the play.

Which team had the best pick from Round 1?

You May Also Like: Did Chris Harrison and Lauren Zima Secretly Get Married? Know the Full Story!

The second and third rounds will take place on Friday, April 30, at 7 p.m. ET. The remaining rounds will be held on Saturday, May 1, starting at noon ET. Each team will have seven minutes to make their picks in the second round, five minutes for compensatory or regular picks in rounds 3-6, and four minutes in round 7.