KJ Allen From Last Chance U: Basketball | Everything You Need To Know About Him 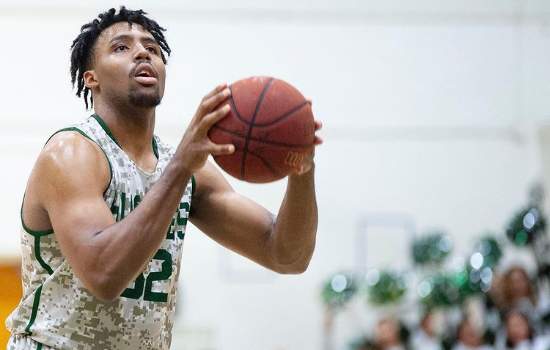 The future basketball star, KJ Allen, has already won the hearts and blown peoples' minds across the world. Though unknown to many, Allen surprisingly became one of the beloved young basketball players when he was featured on Netflix’s sports documentary Last Chance U: Basketball.

Last Chance U: Basketball, released on March 10, 2021, is a Netflix originals sports documentary that follows the path of John Mosley, head coach of East Los Angeles College (ELAC) mens’ basketball team, who tries his best to guide and support his local college-level players and take them to the state level.

Allen in ‘Last Chance U: Basketball’

The Netflix documentary series, Last Chance U: Basketball, focused mainly on how John Mosley, the head coach, guides and teaches his young basketball talents to win their respective matches and grab the attention of state-level recruiters.

Monterey Park, California native KJ Allen also made his appearance in the docuseries, alongside other young talents such as Joe Hampton, Deshaun Highler, Malik Muhammad, and LJ Zeigler.

Allen’s hard work and amazing talent were so clearly shown in the docuseries that those who watched it began calling Allen an ‘absolute menace’ and a ‘beast.’  And, why wouldn’t they be praising his skills, as till the end of the series, he was seen scoring numerous slam dunks with a never-give-up attitude.

During the last episode of the docuseries, it was shown that Allen and his teammates’ dream of joining state-level teams got obstructed as the world got stopped due to the global pandemic, COVID-19. Nonetheless, on November 1, 2020, Allen, through his Instagram handle, announced that he committed to the University of Southern California (USC).

A few days later, a member of USC’s sports management announced that Allen is selected for the USC men’s basketball team and will play in the 2021-22 season.

Hailing from the suburbs of Monterey Park, California, KJ Allen was born on August 17, 2000. His birth name is Kaelen Allen, and his zodiac sign is Leo.

As for his family, his father’s name is Damieon Allen, and his mother’s name is Tajuana Mallard. His father is a former assistant varsity coach who currently works as a mail handler at US Postal Service. Likewise, his mother is a former para-educator and behavior specialist. Apart from his parents, he also has a sibling, a brother named King Allen.

Speaking of his academics, Allen first attended Westchester High School. Following his graduation, he enrolled at East Los Angeles College (ELAC). As of now, he is committed to the University of Southern California (USC).

Some Interesting Facts About KJ Allen