Although famous for creating body-positive videos, the social media star is currently receiving heavy backlash for allegedly telling a fellow TikTok star plus her boyfriend Jack Wright to “commit suicide” and sexually assaulting him multiple times even after Jack set boundaries.

The topic was first discussed in public on May 30, 2021, when Jack’s friend, Mason Rizzo, took to Twitter and called out an undisclosed TikToker who spreads positive messages, basically targeting Sienna Mae. Mason’s tweet read as;

I struggle with seeing a girl getting praised after telling my best friend to kill himself and sexually assaulting him numerous times after he set boundaries and then reportedly wonder why he doesn't like [her] back.

The tweet continued as he wrote, “She also has a history of verbally abusing people in high school and in LA. She prioritizes the growth of her platform rather than the positive message she represents herself as.”

After Mason Rizzo allegedly accused Sienna Mae of assaulting her boyfriend, Jack Wright, numerous Twitter users erupted as they gave their opinions on the matter. Most of them supported Jack, while some of them were shocked to learn about it.

One Twitter user wrote, “I am in absolute shock about this.” Replying to that tweet, another user said, “i kind of saw the insincerity of her platform coming, but am rly shocked in how she treated jack- that is SO messed up !!”

Likewise, some praised Mason for being a good friend and revealing what was really going on.

thank you for sharing this, it’s so important to speak out and i am so glad that this is being spoken about — sare â™¡ (@laressare) May 31, 2021

Moreover, many users took to Twitter to show concern over Jack and support him. Showing her concern, a Twitter user wrote, “i'm sorry for that, i hope jack is fine, he deserves better. :(.”

After Mason accused Sienna, Twitter went berserk, and the social media star began receiving many backlashes. But, less than 24 hours after the tweet was posted, Mason deleted it. Later, he explained that he and Sienna’s and Jack’s family decided to delete the post, and they will discuss the topic “off of social media.”

On Monday evening, May 31, 2021, Sienna took to her Instagram handle to address the topic. She responded by saying, “Friends fight and relationships sometimes change, but allegations of a criminal act are not to be thrown around loosely.”

“Making an untrue sexual assault claim is never okay. I'm beyond saddened by this situation. In order for us all to move forward, I will be taking this offline with Jack. Thank you to all who have reached out with love and concern.”

Although Sienna gave a response, many didn’t believe that she didn’t address anything. One Instagram user took to the comment section and wrote, “this didn’t adresss anything….”

Likewise, another user added, “Um, I'm going to believe the victim until you SAY SOMETHING [to] get your story straight, Sienna.”

Moreover, one of them was upset that Mason had to delete his tweet in less than 24 hours. They wrote, “remove in 48 hours??? Girl what is this, Snapchat?” 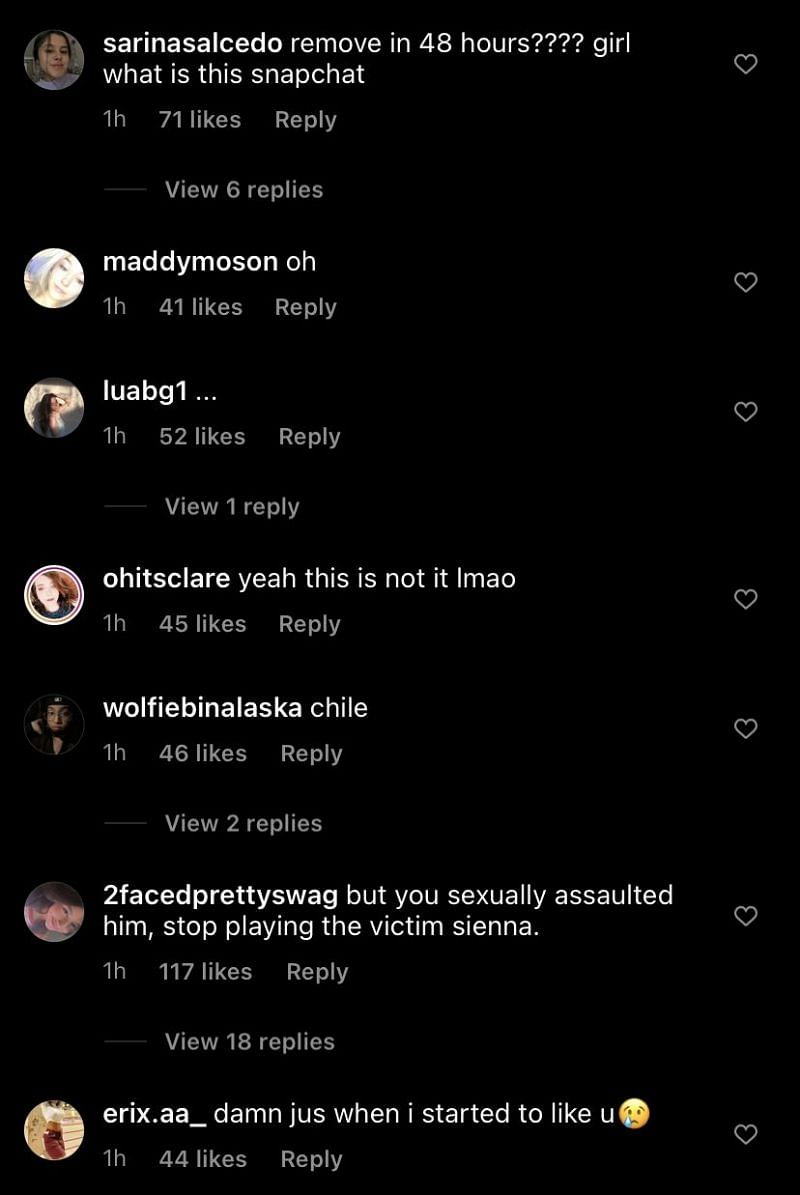 As of now, there has been no follow-up on the topic. Only time will tell if any of the accusations are true, although many already believe in Mason’s statement and are backlashing Sienna.

The two social media stars have been dating each other for a while now. They used to go to the same high school and make many TikTok videos alongside each other. Their friendship slowly took a turn as they developed feelings for each other.

They eventually began dating, which made both of their fans very happy. Their relationship was made official around early 2021. Since then, their followers were able to witness their togetherness in their respective Instagram and TikTok handles as well as in Sienna’s Youtube channel.

On February 2, 2021, she even posted a video titled “Our First Date.” The boyfriend-girlfriend duo was loved by everyone.

However, their appearances in their social media handles were shallow in recent times. As per hitc.com, Sienna even claimed that “no one will ever love her as much as she loves herself” in one of her social media posts. This led people to gossip if Sienna and Jack had parted ways.

And, when Jack’s friend Mason tweet appeared, accusing Sienna of assaulting Jack, the speculations became stronger. So, did the love birds broke up for real?

You May Also Like: 'Mare of Easttown's Julianne Nicholson Talks About Rift in Lori and Mare's Friendship

Sadly, there is nothing much to say now as neither Sienna nor Jack has confirmed anything. Furthermore, with all of the talks going around following Mason’s accusations, it might take a while to get an official confirmation.