Avery Cyrus and New Girlfriend JoJo Siwa Made Their Relationship Official – Here’s What We Know! 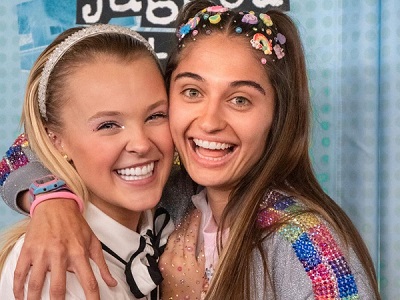 Avery Cyrus is a well-known social media star who first gained recognition after sharing videos on TikTok. She is also recognized for her lip-syncs and clips from her everyday life, often in sketch form. Besides that, Cyrus is also famous on Instagram, where she has amassed over 345k followers.

In the past, Cyrus was managed by Team Colour Sound, and now she is driven by UNDERCURRENT. Besides that, Cyrus once made headlines on the internet after people began speculating that she may be the sister of Miley Cyrus. However, there is no fact about it, and Miley and Avery are not related to each other.

Likewise, Avery is currently in the limelight after going public with her new girlfriend, JoJo Siwa. So, if you are here to learn everything about her present and past relationship, you are at the right spot.

Avery Cyrus and her new girlfriend, JoJo Siwa, made their relationship official by sharing a TikTok video on September 13, 2022. They were pictured kissing in a photo booth at Chuck E. Cheese. Meanwhile, they were also trolled on TikTok for going on a date to the arcade and entertainment center.

Later, Siwa responded to it by sharing a TikTok video and the caption reads,

How I walk knowing I've never taken someone on a date to Chuck E. Cheese

Apart from that, the pair also made their first red carpet appearance together at the Los Angeles premiere of Alanis Morisette's Jagged Little Pill musical. So, we can say that Cyrus' dating life with her new girlfriend is going well, and the lovebirds have also shared some snaps on their social media handles.

Besides, both of them have some affairs in the past, but here, we've talked about Cyrus' past relationship.

Related: Who Is Avery Cyrus? Find Out If She's Related To Miley Cyrus

Avery Cyrus Moved On After a Breakup With Soph Mosca

Moving onwards, Avery Cyrus was previously dating Soph Mosca. The young Tiktok stars dated for some time, and after announcing their split, the duo made headlines on the internet.

After dating each other for over two years, Cyrus and Mosca announced their breakup from their respective social media handles. Cyrus' ex-girlfriend, Mosca, first confirmed their split by sharing an Instagram story on August 3, 2022.

Later, Cyrus also talked about their breakup, and their posts show that the former pair split in mutual understanding. Also, Mosca mentioned that both of them wanted to focus on their life at the moment. Now, the ex-couple are busy with their own life, and Cyrus is also having a good time with her new girlfriend, JoJo Siwa.

Also, they might have thought of giving time to their family. Cyrus shares a strong bond with her parents, Scott Blanchard (father) and Sylvia Flores Bugarin (mother). Her family also includes a younger brother named Jake. So, Cyrus often features her daily lifestyle on her Instagram handle, where we can follow her under the username @averycyrus.

You May Like: Sydney Chandler & Her Boyfriend Louis Partridge Dating Life Explored

Just like her relationship, the topic of Avery Cyrus' sexuality is also one of the most searched topics on the internet. Her content is focused on her LGBTQ audience. Besides that, Cyrus also has a YouTube channel, and her videos are about her sexuality, talking about it and spotlighting other LGBTQ creators for her fan base to follow.

So, some report shows that Cyrus identifies her as a lesbian. Her Instagram bio shows that Cyrus uses she/her/hers pronouns. Despite all these, Cyrus has a huge fan base, and many people love her work.