Does The Voice 2022 Winner Bryce Leatherwood Have a Girlfriend? Everything We Know 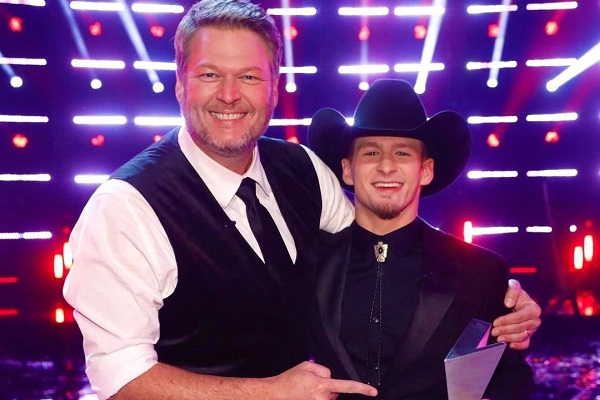 Season 22 of The Voice has finally ended with the title-winning by Team Blake's Bryce Leatherwood. He became the Winner of N.B.C.'s 'The Voice' Tuesday night. Further, Leatherwood had unbelievable performances weekly, winning him a recording contract.

Not only that, but we can say he will have a booming music career under the mentorship of country superstar Blake Shelton. Bodie, Morgan Myles, Brayden Lape, Omar Jose Cardona, and Leatherwood were the top five artists.

With the announcement of Leatherwood winning the title, fans are eager to know more about his background and his love life. So, let's start today's topic with his bio.

Who Is Bryce Leatherwood in The Voice 2022?

Bryce Leatherwood is a rising singer who gained widespread recognition after winning the 22nd season of The Voice. He is 22 years, and Leatherwood is a native of Woodstock. But he resides in Statesboro.

Leatherwood was passionate about music from an early age. So, he began singing in 7th grade at Dean Rusk Middle School in Canton. Also, he graduated with his business degree from Georgia Southern University in Statesboro. His musical career got more into people's eyes when he wowed the judges in the Voice's blind audition.

Leatherwood was able to turn three chairs, and he chose to be at Team Blake. So, due to his amazing performance, he has made history by winning the title. For your information, Leatherwood was the first Instant Save participant to go on to prevail in the competition. During the Top 16 results show, he was placed at the bottom and had to sing for an instant audience vote to save him.

Now, he has won the title, and fans are concerned if the guy is dating someone.

Also See: The Voice Coach John Legend Net Worth Is in Millions: His the Voice Payment Revealed!

Does Bryce Leatherwood Have a Girlfriend? Dating Life Explored

The couple moves to have fun together, and Lexie has shared multiple snaps with her boyfriend on her Instagram handle. Lexie made the first post on Instagram with Leatherwood on November 15, 2020. Since then, she has posted many images. Together, the couple has gone to different events and locations too.

Back in August 2021, Leatherwood and Lexie went to a beat in Florida. Lexie shared a moment of them enjoying the moment. But fans are eager to know if they are still together. Some of them say they may have broken up, as both of them have not posted for some time now. However, there is no fact about the duo parting away.

Leatherwood and Lexie might have to have a good time together privately. We can follow Lexie on Instagram as @lexiehouston and Leatherwood as @bryceleatherwood. We can get more updates about the couple by following them on social media.

Fans Congratulate the 9th Winner of the Voice From Team Blake

Bryce Leatherwood just won the title of the Voice and became the 9th Winner of the show from Team Blake. The first contestant to win from team Blake was Jermaine Paul in season 2.

When Leatherwood was announced as the Winner of the 22nd season of the Voice, fans were quick to react and congratulate Leatherwood. One Instagram user said, "Sooo good. Congrats Leatherwood!! I loved them all though Omar WAS the Voice… just saying… But Bryce, you have a future in Country, and I will be a big fan ofnuphra'nnn."

As Leatherwood is doing well in his music journey, we can expect that his income will also rise. As of now, he may have a decent net worth, but the actual figure remains unknown.