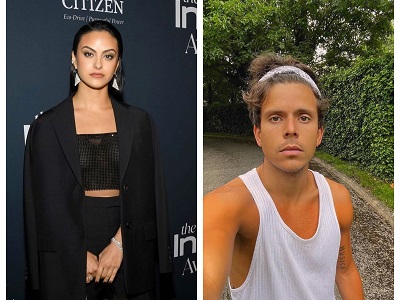 American actress Camila Mendes has remained in the film line since making her debut in 2016 with the role of Veronica Lodge on The CW teen drama series Riverdale. She has also won some awards, including the Teen Choice Award for Choice Scene Stealer in 2017.

Besides, Mendes has currently become the talk of the town after being spotted together with Rudy Mancuso in public multiple times. As we know, they have been spotted together in various places leading fans to think they might be dating.

So, in today's writing, we will address every rumor about Mendes and Mancuso. Stay with us.

As we know, Camila Mendes and Rudy Mancuso are rumored to be dating. They have been spotted together many times in public which left people thinking that they are in a romantic relationship.

Meanwhile, the rumors of them dating first surfaced on social media when a fan asked about Mendes and Chase Sui's relationship. In an Instagram story shared by Deuxmoi, it was revealed that Mendes was not dating Chase Sui. But the gossiper also said that fans think Mendes is dating Rudy Mancuso.

Despite that, it is not confirmed whether they are dating or not. Meanwhile, Mendes and Mancuso have also appeared together in various places. Back in July 2022, they were seen in New York City, where Mendes was seen flaunting black Prada loafers with a revealing maroon cut-out tank top tucked into a hapless pair of grey pleated shorts.

Likewise, Mendes and Mancuso appeared together in Venice, Italy, on September 2. Due to their multiple appearances in public, the rumors of them dating each other have been a matter of concern to many. But it can't be confirmed as none of them have commented regarding this matter. Conversely, some of you may not know they are working together on a project. So, let's take a look at that.

Read This: Nessa Barrett Tattoos Are Tributes to Her Boyfriend – Everything You Need To Know!

Riverdale star Camila Mendes has reportedly signed on to star opposite Rudy Mancuso in the film entitled Música. For your information, Mancuso is directing for Amazon Studios and Wonderland Sound and Vision.

The film follows a young man (Mancuso), haunted by the music in his head, who has to come to terms with an indefinite future while balancing love, family, and Brazilian culture in Newark, New Jersey.

So, due to their work, dating rumors might have circulated. In addition, Mendes had some breakups in the past, which we've briefly discussed below.

Well, Camila Mendes was in a relationship with photographer and director Ian Wallace in 2013. After dating each other for four years, the pair broke up in 2017.

After that, Mendes was linked romantically with her Riverdale co-star Charles Melton. The rumors circulated when they were captured together in a picture in 2018. The dating rumors were addressed in October of the same year when they went official on Instagram after sharing a cute picture together.

Furthermore, the ex-pair was doing well in their life, but after some time, their relationship began getting sour. So, they chose the path of breakup in December 2019. But their love was not over as they briefly reconciled in June 2021. But now, they are not together, and both of them are busy with their own life.