Nessa Barrett Tattoos Are Tributes to Her Boyfriend – Everything You Need To Know! 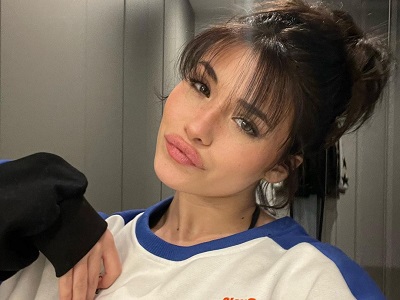 Nessa Barrett, born Janesa Jaida Barrett, is one of the most loved American singers and songwriters who have had an active presence in the music industry since 2019. In 2019, Barrett got into media prominence after sharing a video on TikTok.

Some of the famous songs are Pain, If U Love Me, La Di Die, and I Hope Ur Miserable Until Ur Dead. So, Barrett has gained a massive fan base from her amazing voice. And if you have been a fan of Barrett for some time, then it is sure that you are familiar with Barrett's love for tattoos.

Previously, she was in a relationship with her boyfriend, Jaden Hossler. It is reported that the former pair had the number 3 tattoo on their bodies. So, Barrett made those tattoos to pay tribute to her boyfriend. Keep reading to learn more about the interesting topic.

Nessa Barrett's Tattoos Are Tributes to Her Boyfriend

As we know, Nessa Barrett and her ex-boyfriend, Jaden Hossler, dated in the past. According to Seventeen, the former lovebirds had the number 3 tattoo on their bodies. The tattoo was made by Isaac Pelayo, which was revealed in an Instagram story.

Talking about the tattoo, Barret inked on her left thumb while Hossler was on the right side of his neck. However, the actual meaning of the tattoos remains unknown. But one of the social media users said that the number (3) is used as a reminder to listen to your heart. So, it is a magical number when it comes to love.

So, it can be said that the pair tributed each other by inking matching tattoos. The matching tattoo also grabbed huge media attention, and their snaps can still be found on the internet.

As said earlier, Nessa Barrett loves tattoos. In November 2020, she gave an interview with Elite Daily, and in the respective interview, Barrett talked about her tattoo. Not only that, but she revealed that she likes to ink tattoos related to music and personal life.

She has written HEAVY SOUL on the ribcage. In the same way, there are other tattoos too. We can see two butterflies in her right hand. So, it is reported that it was a tribute to her late friend, Cooper Noriega, who passed away on June 9, 2022.

In the same way, she has written, "I loved you at the darkest." Interestingly, her mother has the matching tattoo in the same place. So, the mom-daughter duo tattooed the same line to remind them of each other.

Likewise, Barrett inked a spider design on her left arm, and it was during the time when she was going through mental problems. From this, it becomes clear that Barrett loves expressing her feelings with tattoos. Now, let's take a look at her relationship status.

Is Nessa Barrett Dating Someone? A Look at Her Relationship Status

The present relationship status of Nessa Barrett is single. So, she is not dating anyone and does not have a boyfriend. But in the past, she was in a relationship with Jaden Hossler.

Since October 2019, they have been in an on-off relationship. After having good moments together, they announced their breakup, and now, they are on their own way. But it is said that they remain a good friend.

Likewise, Barrett was also in a relationship with TikTok star Josh Richards. Their relationship was announced in January 2020. After being together for some years, they parted away and confirmed it in March 2021.