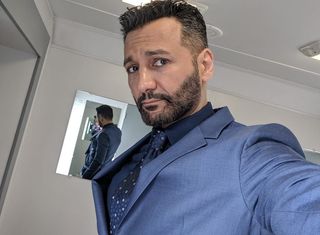 Cas Anvar, “The Expanse” star is currently the major topic of a serious alleged investigation of sexual misconduct. Cas Anvas became an international star from an unknown star over the past few decades.

He significantly rose to popularity after appearing as Kambiz Foroohar in the film Shattered Glass, and since then he has been able to appear in a large variety of TV shows and movies.

Well, he was the most well-known for playing the role of Martin Navy pilot, Alex Kamal, in the most liked TV series by fans, The Expanse. The series premiered in 2015.

Daniel Abraham and Ty Franck, authors of the novel on which the movie is based and along with them the producers of the show revealed the investigation on Twitter.

The controversy came to highlight, when more women were coming forward, sharing their own stories on Twitter.

Read more: Who Is Pretty Little Liars Cast: Malia Pyles in a Dating? Meet Her Boyfriend and Dating Life

In June 2022, Cas Anvar was accused of sexual allegations and assault by many different women on their respective social media platforms, but mostly on Twitter.

According to the survey and reports, there were over a total of 30 women who came forward and claimed that Anvar had sent them inappropriate text messages and pictures that showed the assault.

It all started with a tweet from Twitter by a gamer and a cosplayer who claimed that Anvar specifically targeted female fans and pushed aggressively.

The past few days have been a whirlwind but I want you to know that you are heard. I'm committed to advocate for those who have been mistreated at a place in time where all voices should be heard, and accusations should be treated seriously. — Wes Chatham (@weschatham) June 26, 2020

Another serious allegation was put forward when the actor was accused of pressuring a female into coming to his hostel room at a convention when she was just a minor.

She was 17 years old when this incident happened to her. She also added saying that she was fed alcohol and tried convincing her to take off clothes and groped her.

After that, the victim also claimed that Anvar showed her some money and said her to give it after she kissed him.

One of the claimed victims who came forward is an actress who co-worked with Cas Anvar. Her allegations were later validated by a former VFX coordinator from the Expanse.

Anvar’s cast group from The Expanse which includes Dominique Tipper, Steven Strait, Wes Chatham, and Frankie Adams voiced out their concern on the allegations that were put forward and supported the victims with a tweet.

The accusations against Anvar gained a wide range of visibility in the Reddit thread which infuriated all the claims, which also featured Abraham and Corey’s tweets and their reactions from Expanse cast members.

What Happened to Cas Anvar? Update on the Instances

The producers of the sci-fi series, Daniel Abraham and Ty Franck revealed that an investigation was following seriously and has been underway and they had tweeted saying “So one of the core cast of #TheExpanse has been accused of sexual misconduct.

We passed these serious accusations onto the studio, Alcon. Alcon has engaged an independent firm to investigate this matter and takes these allegations seriously.

I appreciate Alcon treating this matter with the gravity it deserves,” Abraham wrote.

So one of the core cast of #TheExpanse has been accused of sexual misconduct. We immediately passed these serious accusations onto the studio, Alcon. Alcon has engaged an independent firm to investigate this matter and takes these allegations very seriously. — Daniel Abraham (@AbrahamHanover) June 26, 2020

A statement from the account name under, James S.A Corey adds that the underlying statement was fully true.

Meanwhile, there was a statement that was released by Anvar himself that he would be “fully available to participate” in the investigation so that he could refute the allegations dropped on him.

And, if I may, a wholehearted thank you to those who were brave enough to bring this to us. We hear you. This will get the attention and action such serious allegations deserve. I'm staking my reputation on it. — James S.A. Corey (@JamesSACorey) June 26, 2020

There have not been many updates about the sexual assault allegations ever since the initial buzz, and somehow the actor has fallen off the radar.

By this, Anvar’s character was killed in the season 5 finale of the Amazon sci-fi series. Well, this has made a negative impact on his impression and he has not appeared in any new projects.