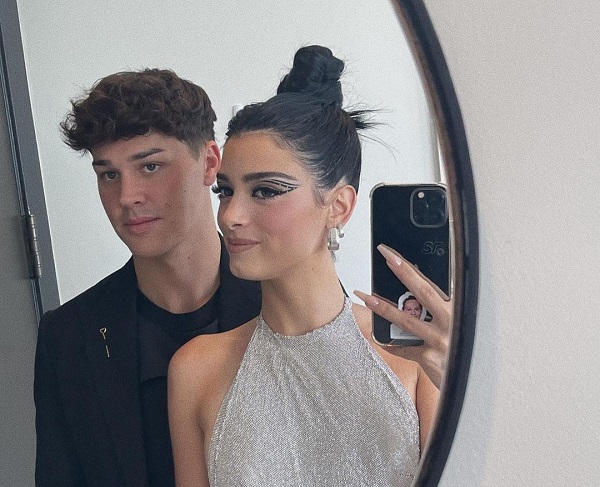 Dixie D'Amelio and Noah Beck are a powerful couple whose love life has been admired by many people. Initially, the duo kept their love life a secret but later confirmed it with their viewers. Now, they are still together and are doing great in their life.

Talking about their professional life, D'Amelio is a professional American singer and social media personality. She is also a TikTok star who has gained a massive fan following on her account. In addition to that, D'Amelio is also known for hosting a talk show on YouTube named Early Late Night Show.

Besides that, Beck is also a well-known social media personality who has an active presence on TikTok, where he shares various interesting content. Also, he has an athletic background, as Beck was a midfielder for the Portland Pilots men's soccer team in 2019. The pair, D'Amelio, and Beck, got more into media prominence after making their relationship debut in October 2020.

Let's get to know more about their relationship timeline in the below article.

Dixie D'Amelio and Noach Beck started their relationship as good friends. Their fans and supporters are keen to know about their dating beginning which we've discussed here.

In mid-2020, things were heating up between Beck and D'Amelio. But during that time, both of them denied dating each other and said they were just friends. However, after exploring their TikTok videos, fans were convinced that there was something going up between the pair.

.In September 2020, they shared a steamy smooch in a TikTok video, which further sparked romance rumors. Finally, on September 25, 2020, the duo confirmed their relationship as being a girlfriend and a boyfriend.

Related Article: Who Is Dixie D'Amelio Dating? Meet The Boyfriend Of The Hot TikTok Star

As said earlier, Dixie D'Amelio and Noah Beck initially preferred to stay lowkey rather than share their information with the media. It may be due to privacy reasons. After sharing some TikTok videos, the dating rumors of the couple were going wild.

Moreover, D'Amelio and Beck accepted being boyfriend and girlfriend in September 2020 after sharing a cute picture on Instagram. Despite that, they didn't make their relationship debut in public, but the time came in October of the same year.

Their relationship became public after sharing a YouTube video in October. In addition to that, D'Amelio also talked about her dating life with her boyfriend in a podcast called 2 Chix podcast.

So, D'Amelio and Beck began posting multiple snaps on their social media handles, and some of their well-wishers are eager to know if they are still together.

Click To See: Is Taylor Frankie Paul Having An Affair With Brayden Rowley? Explore Her Wiki, Age, Husband & Net Worth

Are Dixie D'Amelio and Noah Beck Still Together?

The answer to the above question is a big Yes. Dixie D'Amelio and Noah Beck are still together, and their dating life is going really well. The pair have talked about each other in various interviews too.

In January 2021, Beck expressed his feeling about getting married to his girlfriend, D'Amelio. In February of the same year, the pair's relationship made headlines as they went for a romantic helicopter ride on Valentine's day.

Throughout their relationship, the twosome has faced some problems too, which includes a rumor of Beck dating D'Amelio for clout. But Beck addressed all the gossip and shared his true feelings for his girlfriend. Back in September 2021, the pair celebrated their one-year anniversary.

Being in a relationship for quite a while now, the pair have been spotted in some places. In April 2022, D'Amelio and Beck were spotted at the Revolve Festival during Coachella in Indio, California.