A Look Into YouTuber Eugenia Cooney's Wiki, Age, Net Worth, And Personal Life 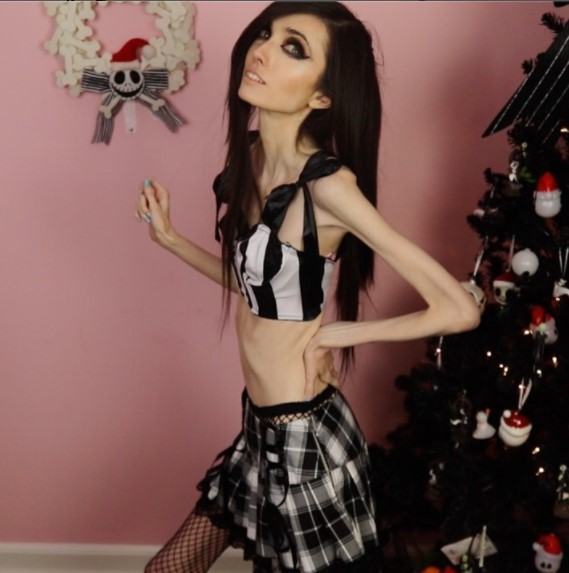 The 27-year-old Eugenia Cooney is an American YouTuber, Twitch Broadcaster, and Social Media Influencer. She has become a sensation thanks to her emo and gothic looks, Cooney's content primarily features clothing hauls, beauty, cosplay, and vlogs of her daily life. She also frequently does live streams on her Twitch account.

Cooney currently lives with her family in Greenwich, Connecticut. Moreover, she also has a place in Burbank, California. Eugenia is also suffering from anorexia and eating disorders. In 2019, she had taken some time off from her social media to get help as well. In 2021, social media users even signed petitions to get her banned citing the reason that she was promoting an eating disorder.

Born on July 27, 1994, in Boston, Massachusetts, U.S, Eugenia Sullivan Cooney is 27 years old. Eugenia's real name, or birth name, was Colleen Cooney. However, it was changed to Eugenia several weeks after her birth. Her nationality is American. Eugenia's ethnicity is not known. She also has a brother called Chip Cooney. Eugenia and Chip grew up together in Connecticut where they later shifted to.

For most of her childhood, Cooney was bullied at school which compelled her to change schools numerous times. Finally, Eugenia's parents decided to homeschool her for the last three years of high school. Eugenia later moved to New York to learn acting. In 2011, she launched her YouTube channel named, “Eugenia Cooney".

Cooney's YouTube content predominantly consists of clothing hauls, vlogs about her daily life, cosplay outfits, and makeup tutorials. In 2018, the YouTuber began live streaming on Twitch as well where she has over 406K followers as of 2022.

Yayyyy I’m free!! :D the ban is over!! https://t.co/shLdXOMCzP pic.twitter.com/afeIXzFbFi

After forming her online presence in 2011, Eugenia began live streaming on the broadcasting service called you now. However, she created a YouTube channel in the same year considering its reach and popularity. Her video titled "How to Ratchetly Twerk" uploaded in 2013 went viral on the internet after it was shared on WorldStarHipHop.

Recently, Eugenia uploaded a video on her YouTube account where she talked about getting covid. The video also featured her mother. However, most users commented how distant the mother-daughter looked, almost like strangers. Some even directed their anger and frustration at Eugenia's mother for not getting Eugenia any help regarding her Eating Disorder and accused her of perpetuating it.

Before this, Eugenia's friend Jaclyn Glenn made a video in 2019 calling Eugenia's mother a dangerous person who didn't want her daughter to get help. Moreover, Jaclyn also mentioned how she had to trick Eugenia to come into her place to help her. But after Eugenia's mother found out, she yelled at Jaclyn and even tried to call the cops on her.

Besides, Cooney is also on Instagram where she has 708K followers, and on Twitter with 304K followers.

Read about: Who Is Cross Fit Athlete Demi Bagby? Explore Her Wiki, Age, And Net Worth

Who Is Eugenia Cooney Dating? Know Her Boyfriend

Presently, Eugenia Cooney is single. She isn't dating anyone. But Eugenia did joke before that she had a boyfriend who was the skeleton hanging in her bedroom. It's not the first time the influencer has joked about being in a relationship. Eugenia even fooled her fans to think she had found the love of her life at six years old and had nothing but good stuff to say about him, only to later reveal she was talking about Jack Skellington.

Jack Skellington is a skeletal zombie and the main protagonist of the 1993 film called The Nightmare Before Christmas.

Eugenia Cooney's net worth is estimated to be $500,000 as of 2022. The Youtuber has made her wealth from her social media channels.