Euphoria Actor Jacob Elordi Is Gay? More on His Sexuality and Relationship 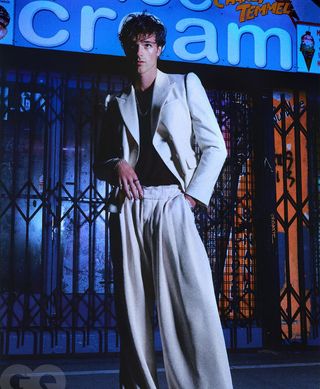 Jacob Elordi found instant fame as a heartthrob in the rom-com genre, he became a sensation for his appearance as a charming, fascinating, and toxic anti-hero on Euphoria.

Now the actor is living his life on the sets of Hollywood.

He is also a well-known actor for playing Noah Flynn in the Netflix series ‘The Kissing Booth’. Along with that, he became more famous for his role in the HBO drama Euphoria.

Jacob Elordi recalls how he was called gay during his school time but now the actor seems fine with the rumor. Elordi has his own perceptions talking about sexuality and being called gay. Let’s look at more of his insights.  Read more: 90 Day Fiancé's Tania Maduro’s Split With Ex-Husband Syngin Colchester! More Into Her Insights

There are rumors that have been swirling for more than a year that Elordi and Zendaya, 23, were dating, ever since the two were seen vacationing together in Greece.

They were also spotted hanging out in New York City. But it all seems big speculation and rumor as of now, Zendaya seems to be dating Tom Holland, the Spiderman actor.

But while he spoke to ET at the premiere of Euphoria, he gave a few remarks to Zendaya and called her “brilliant” and “beautiful”.

He also added it by saying it was an amazing experience for him to work with Zendaya, and how he is a massive fan of hers.

But, this is every remark given by her co-stars because why not, she is a brilliant and beautiful actress.

Who Is Jacob Elordi Girlfriend?

Jacob Elordi has always been very private and confidential about his relationship with his partners and girlfriends. He is barely seen discussing anything of that sort. But however, the paparazzi always have their own way to crack it down.

Recently Elordi is reported to be dating the American model Kaia Gerber. She is a fashion model and the daughter of actress Cindy Crawford and businessman Rande Gerber.

The duo were seen together and were captured during their cozy dinner date at Nobu restaurant in Malibu on September 1, 2020.

Elordi and Gerber went to the dinner as friends, but since then their relationship speculations have been spreading over and they seem to be very close to each other and inseparable.  Read more: Actor Alexander Vlahos Has a Wife? Who Is He Married To? Facts on His Relationship & Dating Details

Jacob Elordi Fact-Checks on His Gender and Sexuality

Well, Elordi has been questioned a lot about his sexuality and gender-based questions but as of now, it has not been very clear about the topic.

In his very outstanding performance in Euphoria as a character who has played a similar role, Elordi has mentioned that he has thoroughly enjoyed performing and dressing as the female gender.

In his recent interview, and in response to a question about his sexuality the actor has replied with utmost grace that he does not want to lose the entirety of who he is as a child and as a grown-up.

He also added by saying it would be very negative to comment on anything of such and he is what he is as of his current version.

Further, he also added by saying everything about his younger self appeals to him and he refuses to view it objectively in any way.

He wishes to participate and experience everything firsthand.

At the age of 12, he developed a passion for acting and the entertainment business. He continued to act and also had an interest in playing sports and participating rugby squad at his school.

He was a very confident man but other students called him a ‘sissy’ and questioned his sexual vibe and orientation.

The actor also vividly remembers being called out and labeled as ‘gay’ at school while he played and performed in the theatres.

He was good both at sports and acting but others thought of him as something else and called him out for no reason.

Elordi recently had himself photographed in the most exclusive fashion magazine GQ and had an interview with them. Jacob Elordi shares how he always had a passion for acting and from a very young age, he started working towards his goals.

He also shared how he read biographies and profiles of his idol actors from Hollywood and emaculated these stars.

Elordi found fame in the most modern way and gained millions of followers on Instagram overnight. Fans can go check Elordi's profile named as- @jacobelordi

Elordi shares his journey thoroughly with the GQ on his projects and upcoming movies he has worked with. He has also shared his experiences on his show Euphoria and how thrilling it has been for him.

Elordi tells GQ that playing Nate’s character in Euphoria was a matter of imagining the opposite of his own adolescent experience.